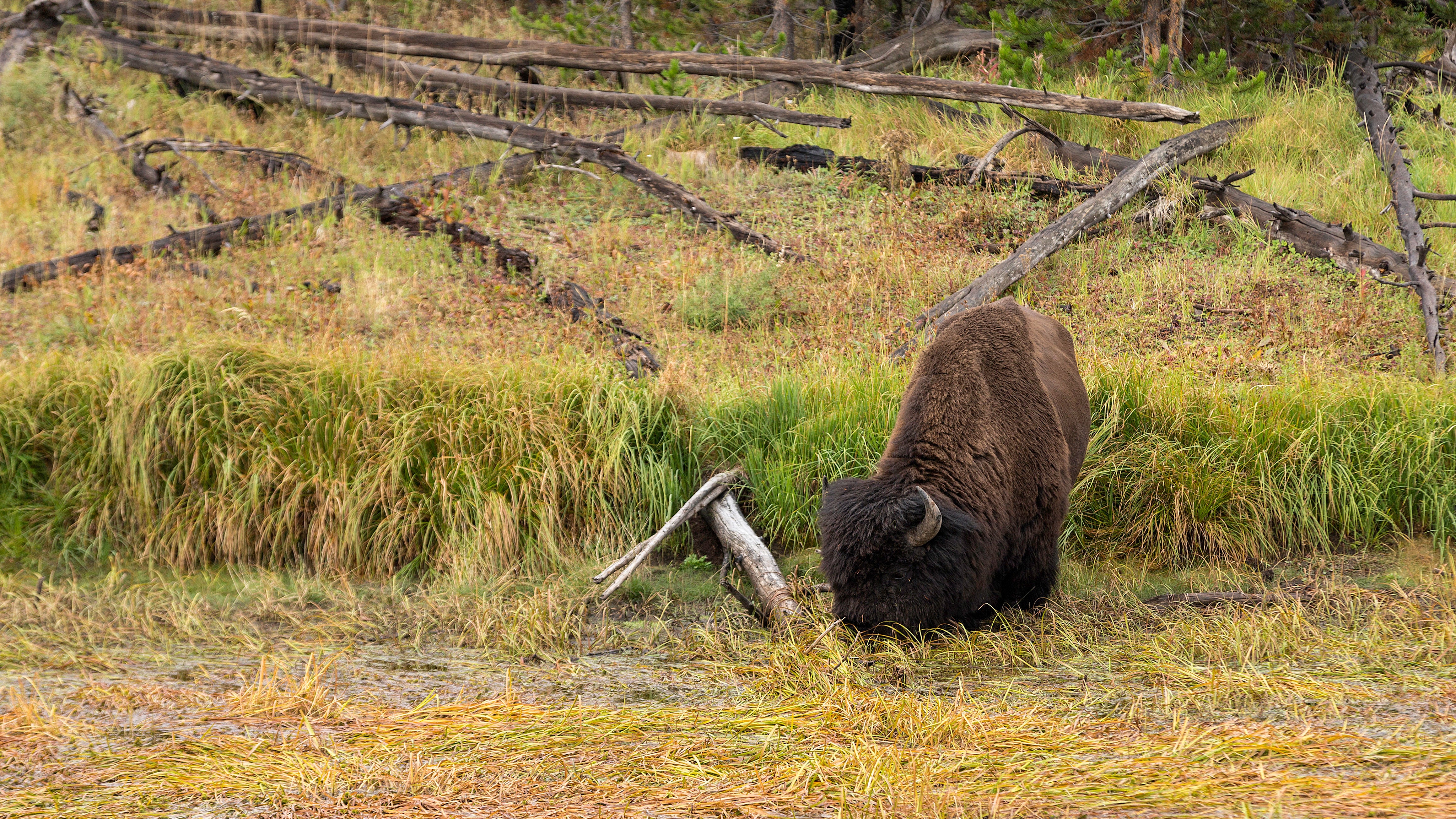 Here is our next installment of a new pop-up podcast miniseries that takes your ears into the deep sound of nature. Host Jacob Job, an ecologist and audiophile, brings you inches away from a multitude of creatures, great and small, amid the sonic grandeur of nature. You may not be easily able to access these places amid the pandemic, but after you take this acoustic journey, you will be longing to get back outside.

Strap on some headphones, find a quiet place, and prepare to experience sunrise on a Yellowstone marsh and then relax—if you can—close enough to a bison to hear it eat its lunch.

You can catch more episodes in the series here.

In today’s episode it’s May and we head to Yellowstone National Park in northwestern Wyoming. Yellowstone might be the United States’ most famous national park, attracting millions of visitors each year from around the country and world. Most come to Yellowstone to seek out its wildlife or to gaze upon its many geysers.

We’re going to explore it from a slightly different angle.

Beginning at dawn, we’ll set out to explore the Slough Creek drainage near the park’s northern boundary. We’ll start the day eavesdropping on secretive marsh birds before making our way to a more remote section of the park, where we’ll watch for wildlife in a massive mountain meadow. Let’s go for a walk.

A reminder, Yellowstone National Park is a wild place with grizzly and black bears. For safety, you should always carry bear spray and travel in groups of at least three when out hiking and exploring.

Woah! Listen to those sounds!

The sun hasn’t quite breached the hills to our right, but there’s enough light to make out the landscape in front of us. We’re in a sort of mini valley, surrounded by low lying hills covered in sagebrush and some conifers. We’re seated on the edge of a small marsh near the mouth of the Slough Creek drainage. There’s some open water but its not very deep. Most of what is in front of us are stands of cattails and other wetland plants.

The sounds we are hearing are some of the many marsh birds that call this place home. There’s a lot going on, so…

Huh! You hear that?

Wolves, off in the distance. Listen closely.

Wow, I didn’t expect to hear that. That was so cool!

Where was I? Oh yeah. There are a lot of different sounds right now. Let’s spend a little time sorting through them as the sun crests the horizon.

The first thing that stands out are the loud, harsh, almost strained calls and songs of those Yellow-headed Blackbirds in front of us. See them sitting on top of the cattails?

They sound similar to the Red-winged blackbirds down there.

Most any wetland across the country will have Red-winged Blackbirds, but Yellow-headed Blackbirds are found mostly in western wetlands.

There’s a tiny, secretive marsh bird hidden in those cattails making that sound. It’s called a Sora. We probably won’t see it, but it’s fun knowing its down there making a living.

If you look closely in the cattails, you can see it’s tiny olive green body, yellow face, and bold black mask across its eyes. Again, like the Sora, it can be difficult to see, but regardless, its song is part of the soundtrack of places like this.

There goes a mallard.

Blackbirds in general make so many different sounds. It can be hard to keep them all straight. Most of these high-pitched sounds we’re hearing are from either Red-winged or Yellow-headed blackbirds. Sometimes it’s best just to sit back and enjoy the sounds and not worry about identifying them all.

Hear all that splashing and those popping sounds?

They’re from American Coots. They made the loud sounds we heard when we first started this morning.

See them chasing each other?

This pair likely made their way up from their wintering grounds in New Mexico to breed at these ponds.

There’s goes a Cinnamon Teal to our right. Look at those red feathers in the sun! So beautiful.

Those coots are relentless. Constantly chasing each other.

Well, what do you say? Let’s tighten up our shoelaces and make our way uptrail to the first meadow to see what’s going on up there.

Let’s stop here and catch our breath. That was quite a climb.

We’re sort of sandwiched between the Washburn and Absaroka mountain ranges with a mile of open meadow and valley in front of us.

Slough Creek is quite large at this point. Maybe 80 feet across and five to six feet deep in places. Over the rise out in front of us you can hear it spill over a series of small waterfalls through a tight canyon.

It’s a Spotted Sandpiper. There, down by the creek. Look at how it bounces as it walks. They live along the shores of the creek. We’ll have to be careful when walking so we don’t step on their nests.

Look who landed just above us.

It’s a Ruby-crowned Kinglet. So much energy for such a tiny little guy. They’re pretty common in the park, so keeps your ears open for them.

Here’s another bird that is really common in wet meadows like this. It’s a Lincoln’s Sparrow.

I know most people don’t get excited about sparrows, but if you look closely at them, they’re so beautiful and intricately marked. And what a sound they add to our morning!

Look out in front of us. There’s a small herd of bison coming our way. It looks like they might cross the creek. Let’s give them some space and move up under the trees.

You can hear them eating. It’s crazy they can get so big just from eating plants.

See that tiny yellow bird that flew into the willows next to the bison?

It’s a Yellow Warbler. It’s like a ray of sunshine.

Hear that song coming from the aspen in front of us? Kind of sweet and raspy? It’s a Warbling Vireo. It’s not much to look at, but that song is so joyful.

Hey, see the trail in front us? Look just past it at that tall tuft of grass. See it? There’s a tiny sparrow near the top. It’s a Savannah Sparrow. It’s song kind of sounds like an insect, so they’re easy to overlook.

Moments and days like this are absolutely priceless. The more I sit and am silent out in nature, the more I end up seeing. It’s a good reminder to slow down and pay attention.

Maybe we should call it a day too. Thank you for joining me. I’ll see you on our next national park nature walk.

Jacob Job is a conservationist, scientist, science communicator, and field recordist looking to take conservation efforts to the next level by engaging the public on issues related to biodiversity, sustainability, and land conservation and preservation using natural sounds recordings, education and stewardship. He is a member of the Sound and Light Ecology Team at Colorado State University.