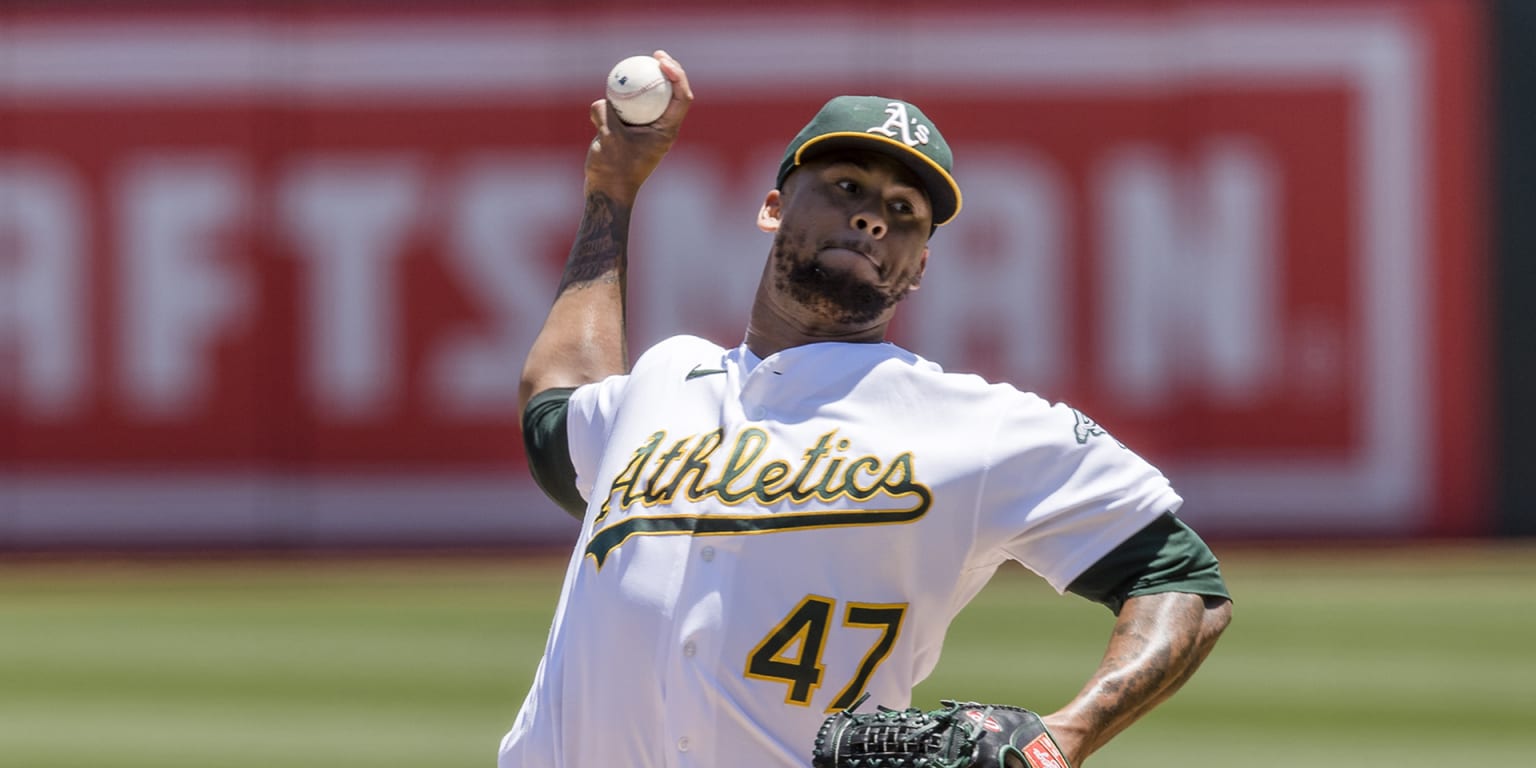 OAKLAND — Since the franchise’s inception in 1901, the A’s have recorded 13 no-hitters. The way Frankie Montas was carrying himself on the mound Thursday afternoon, it sure looked like he was on a mission to add to his own historic performance.

Carrying a no-hitter into the eighth inning of what ended as a 2-1 loss to the Mariners at the Coliseum, Montas’ dominance on the mound was met with little resistance from Seattle’s lineup. The no-no flirtation ended after Adam Frazier slashed an opposite-field single to left with two outs in the eighth. Nonetheless, it was a stellar performance from Montas, who registered eight strikeouts across eight pristine scoreless innings, allowing just two hits and two walks.

It was a herculean effort that went unrewarded. After Montas departed, Zach Jackson and A.J. Puk failed to hold up a one-run lead in the ninth, with a pair of wild pitches from Puk allowing the tying and go-ahead runs to score.

“Frankie goes out and dominates again,” manager Mark Kotsay said. “Frankie had his best stuff today. A reflection of how deep he went without giving up a hit. It was a baseball game we should have won.”

With the last-place A’s scuffling through a rebuilding season, Montas has emerged as an elite trade chip ahead of the Aug. 2 Trade Deadline. Given the stuff he displayed Thursday, it’s easy to see why teams are eagerly placing calls to Oakland’s front office in the hope of acquiring his services.

Pitching on five days of rest, Montas’ blazing fastball seemed to have even more zip than usual, maxing out at 99.1 mph. That velocity remained steady throughout. His 102nd and final pitch of the day, which induced an inning-ending groundout out of J.P. Crawford in the eighth, was clocked at 98.5 mph.

“Frankie’s been pretty much dealing all season,” said A’s catcher Christian Bethancourt. “Today was just another day for him. He was making pitches. Early on, he wasn’t getting some pitches close in the strike zone and then he started getting them as the game was going. He never came off his strength.”

That strength was a fastball Montas favored heavily. He threw the heater for 42 of his 102 pitches, generating five of his 12 whiffs (swing-and-misses) with it and using it as the putaway pitch for five of his eight strikeouts.

Making Montas’ masterful performance all the more impressive is the fact that it came on a day in which he threw his splitter — a pitch that has emerged as one of the more unhittable offerings in baseball this season — just 19 times.

“This might have been my best fastball day,” Montas said. “My fastball was pretty good. Cutter was working. I don’t think I threw that many splitters, and that’s my go-to pitch. But I was feeling good with the fastball and it was working today.”

When a pitcher takes a no-hit bid this deep, there’s usually a point in the contest where they realize the gravity of the situation. Montas, though, was too locked in to think about it.

His focus was evident from the jump. Montas retired the first three batters of the ballgame on four pitches. From then on, he continuously pounded the zone. Of his 28 batters faced, Montas fired 18 first-pitch strikes. When the Mariners did make contact, it was mostly weak, as Seattle’s hitters averaged an exit velocity of just 86.4 mph on the 18 balls hit in play against him.

“To be honest, I wasn’t really feeling like something special was happening,” Montas said. “I wasn’t really thinking about hits or whatever. Just make good pitches and do my job.”

Upon completing the eighth inning, Montas took a slower-than-normal walk back to the A’s dugout. As his walkout song, “Pa’ Que Retozen” by Tego Calderón, blared over the Coliseum speakers, Montas received a standing ovation from the Oakland crowd. In response, the right-hander showed appreciation for the gesture by gently clapping his glove in the air before returning to a hero’s welcome from his teammates.

Montas doesn’t classify as homegrown talent, but it certainly feels that way. Acquired from the Dodgers in a 2016 trade, it’s within the A’s organization that he’s transformed from just a hard thrower into one of baseball’s most dominant pitchers.

Now with the A’s expected to seek out pieces to build towards the future at the upcoming Trade Deadline, Montas could soon find himself pitching in another uniform. But his contribution to this current team has already been invaluable, particularly for the younger pitchers on the roster.

“Frankie’s a fierce competitor and leader on the staff,” Kotsay said. “A guy that goes out every fifth day and gives you all he’s got. Every time he takes the mound, he’s prepared. A reflection of the grind and grit we talk about in this organization that it takes to have success.”