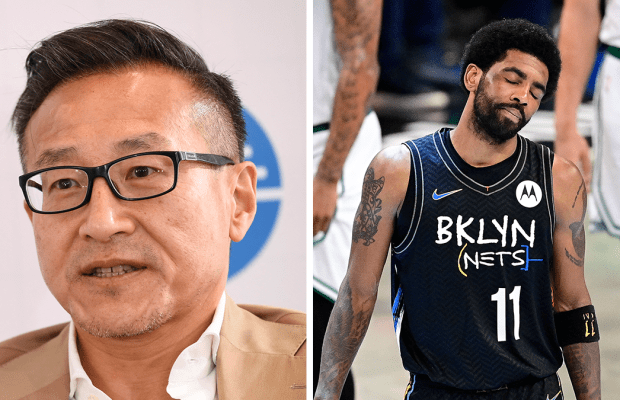 Brooklyn Nets owner Joe Tsai hopes Kyrie Irving “gets vaccinated as soon as possible,” but held firm that the star needs to be vaccinated to play for the franchise as long as New York City has a mandate.

“I don’t know,” Tsai said to ESPN when asked when he thinks Irving will play again. “Either he has to be vaccinated in order to come back if the New York mandate is still in place. And don’t ask me when they may or may not change the New York mandate. Again, if you ask the people that are making decisions at the city level, they are going to say we are going to rely on science, rely on what the health department tells us [in order to proceed].”

Tsai said it was a team decision for Irving not to play until he complies with New York’s COVID-19 mandate, adding that he has not spoken to Irving since the collaborative decision was made Oct. 12.

“Obviously Kyrie has his own belief so I respect that. But we have to make a team decision. This is not a decision about him,” Tsai said, who owns the team with his wife, Clara Wu Tsai. “This is a decision about where we go as a team. And it is just not tenable for us to have a team with a player that comes in and out, no home games, only away games. What do you do in practice then?”

As a result of a New York City mandate, which requires proof of vaccination to enter indoor arenas, Irving is currently ineligible to play in Brooklyn home games in 2021–22. However, New York officials deemed the HSS Training Center in Brooklyn a “private facility.” Despite this move, Brooklyn general manager Sean Marks said on Oct. 14 that the team will not allow Irving to play or practice “until he is eligible to be a full participant.”

League commissioner Adam Silver expressed disappointment on opening night that Irving was not with the team, but reiterated that he should get vaccinated.

Hall of Famer Charles Barkley urged Irving to think about those around him who could be impacted by his decision during the same TNT’s pregame show.

“First of all, you don’t get the vaccine for yourself. You get it for other people … I think everybody should get vaccinated,” Barkley said. “I really am proud of the Nets for putting their foot down and saying we’re not going to deal with this half on, half off. The only thing that bugs me is he’s still going to make $17 million sitting at home.”

Meanwhile, a group of protesters gathered outside of Barclays Center ahead of the home opener last week, yelling “No vaccine mandate. Stand with Kyrie.” On the matter of the protest, Tsai, who advocates for getting vaccinated, told ESPN, “They’re hijacking the issue, but it’s dangerous because we have a life-and-death situation. The fact is, if you are not vaccinated and you catch COVID-19, you have a much higher probability of getting very, very sick and end up in the ICU and possibly die. That’s the consequence.”

After the news broke that he was ineligible, Irving explained on Instagram live that he would continue to maintain his fitness until he regained eligibility.