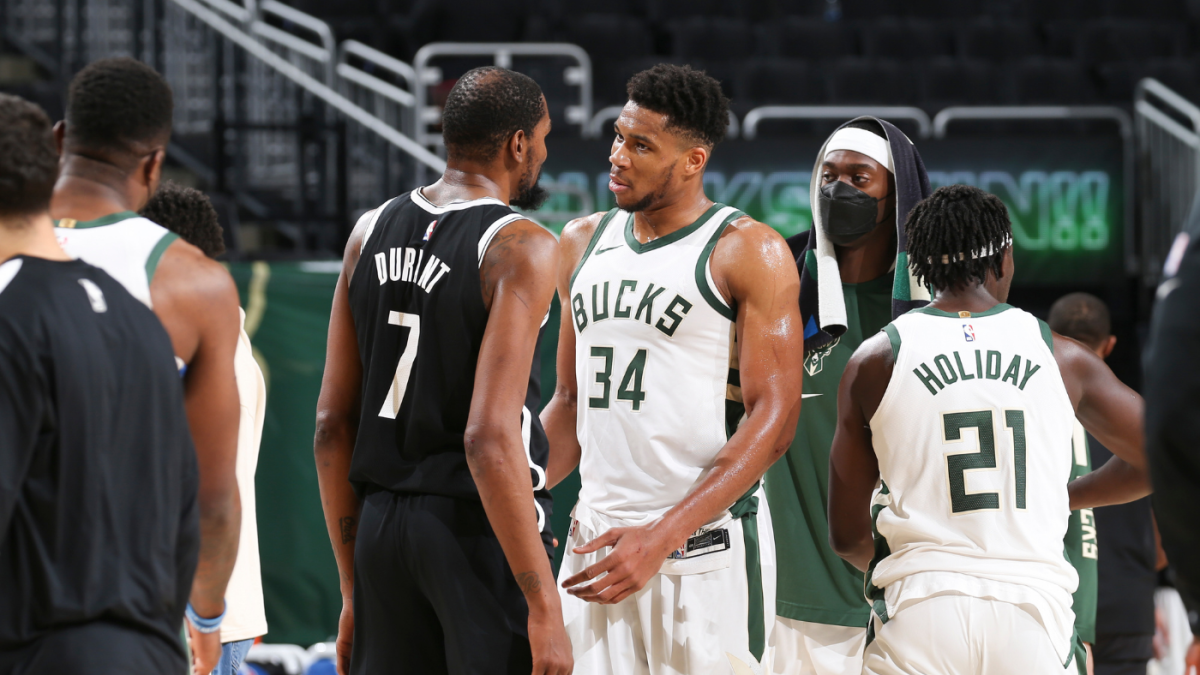 The Brooklyn Nets and Milwaukee Bucks will meet in a heavyweight Eastern Conference semifinal showdown after both teams made short work of their opening-round opponents. The Nets bested the Boston Celtics in five games, and the Bucks needed only four games to dispatch the Miami Heat. After both took care of business in the first round, Brooklyn and Milwaukee will battle for the right to advance to the Eastern Conference finals.

The Bucks will be looking for their first conference finals appearance since 2019, while the Nets haven’t been there since 2003 when they were led by Hall of Famer Jason Kidd. For what it’s worth, the Bucks won two out of three contests against Brooklyn during the regular season, including the two most recent games in early May. There will be no shortage of star power in this series as the Nets have four players who have made at least six All-Star teams in Kevin Durant, James Harden, Kyrie Irving and Blake Griffin, while the Bucks have three All-Star-caliber players of their own in Giannis Antetokounmpo, Khris Middleton and Jrue Holiday. Both teams are legitimate title contenders, so this series promises to be a battle.

Here’s a look at the series schedule and three things to know ahead of the showdown between the No. 2 Nets and No. 3 Bucks.

1. Can Milwaukee limit the production of Brooklyn’s star trio?

Brooklyn’s big three of Durant, Harden and Irving got whatever they wanted on the offensive end against the Celtics in the first round. They were downright dominant against Boston, and in the process, they became the first trio to ever record 200-plus points over two consecutive playoff games. Together, they averaged 85.2 points per game against the Celtics — the most by a trio in a playoff series, ever.

All three players averaged over 24 points per game against Boston, and all three also shot over 49 percent from the field. To say that they were extremely efficient would be an understatement. If Milwaukee wants to advance, it will need to do a better job of making things difficult on those three and in turn limiting their production. The good news for the Bucks is that with their own trio of Antetokounmpo, Holiday and Middleton, they might be the team best equipped to defend Brooklyn’s stars, at least on paper. Antetokounmpo, specifically, is one of the few players who can come close to matching Durant’s combination of length and athleticism. He’s already shown that he’s capable of successfully blocking Durant’s jumper.

Plus, P.J. Tucker is another versatile defender that Milwaukee brings off the bench who can make a difference in this series. There’s no such thing as stopping the combination of Durant, Harden and Irving, but if the Bucks can make sure those guys don’t get too many easy or open looks, they’ll give themselves a solid shot at winning the series.

2. The Nets need to attack the defensive glass

The Nets have an all-time great offense, but they’ve been far less dynamic defensively. During the season, they were simply able to outscore most teams on most nights, but that might not necessarily be the case against the Bucks, who possess a top five offense and also promise to make things tough on the offensive end for Brooklyn. During the regular season, Brooklyn had the league’s 22nd-best defense, and at times they resembled a piece of Swiss cheese, with holes everywhere.

As a team that doesn’t typically utilize a traditional center, the Nets are especially vulnerable in the paint and on the glass. During the season, they gave up 15.3 second-chance points per game, which was tied for the most in the league. They also allowed 16 second-chance points per game against Boston in the first round, and with a starting front line that consists of Brook Lopez, Middleton and Antetokounmpo, the Bucks are much bigger and more formidable in the paint than the Celtics are.

During the regular season, the Bucks grabbed over 10 offensive rebounds per game and averaged 15.3 against the Heat in the first round. Those rebounds resulted in 18.8 second-chance points per game against Miami. The Bucks will almost certainly try to take advantage of their sheer size and look to attack the offensive glass against Brooklyn. For the Nets, boxing out and securing defensive rebounds needs to be a priority, or else the Bucks could gain a major advantage there.

This is the first season that the Nets’ trio of Durant, Harden and Irving played together, so while it would certainly be a disappointment if they didn’t win the title, it wouldn’t necessarily be the end of the world in Brooklyn. They’ll be able to run it back with largely the same squad next season. Plus, they would have the excuse of barely having played together during the regular season. For the Bucks, though, things are different. They have largely the same squad they’ve had for the past several seasons, plus Holiday. They finished with the best overall record in the NBA the last two seasons prior to this one, and they flamed out in the playoffs before reaching the Finals both times.

So this season, there is some added pressure on Milwaukee to get further than it has over the past few years. If it’s unable to, some organizational changes could be coming, both potentially to the roster and the coaching staff. The Bucks locked Antetokounmpo up on a long-term extension over the offseason, so he won’t be going anywhere, but outside of him it sure seems like there would be little certainty in Milwaukee following a second consecutive second-round exit.