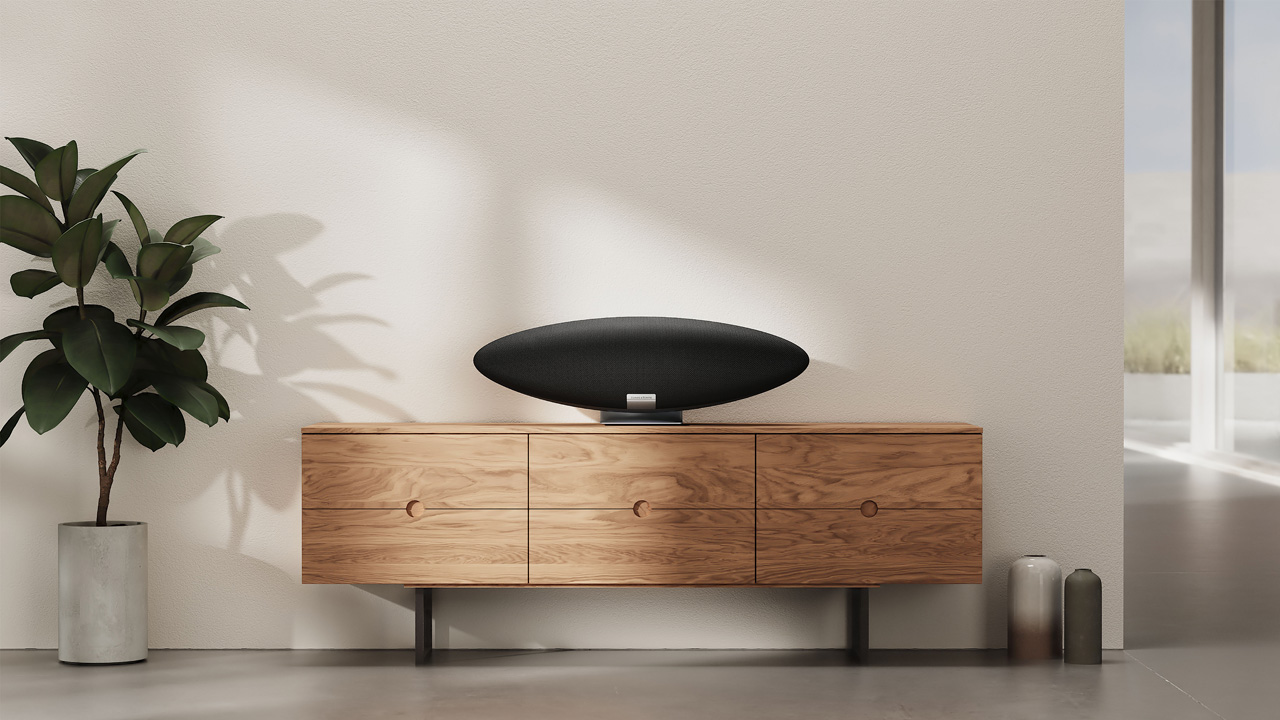 The Bowers & Wilkins Zeppelin is one of the most recognizable wireless speakers on the planet. Having started life as an iPod dock (those were the days), the speaker has had no less than three different iterations – and now it’s been upgraded once more for 2021.

The new Zeppelin looks pretty similar to its predecessors, with that unmistakable oval shape that looks like like a floating airship. There are a few tweaks to the design, though; available in dark and light gray, the speaker now includes ambient lighting around its base that projects a halo-like effect onto its metal pedestal stand.

While most audiophiles will agree that two speakers are better than one, the Zeppelin offers a complete stereo system in one package, with dedicated left and right speakers assembled around a central 150mm subwoofer.

Those speakers are mounted in an “ultra-rigid” enclosure that’s been designed for the best audio dispersion possible – in other words, you should find the Zeppelin is more than capable of filling your living room with sound.

There are also two decoupled double-dome tweeters mounted at the far edges of the enclosure. These tweeters – which originally featured in the company’s 600 Anniversary Series – are isolated from the other larger drive units, which Bowers & Wilkins says allows for a “wide, spacious, and highly accurate sound”.

The tweeters are paired with 90mm midrange drivers that use the company’s Fixed Suspension Transducer technology – the same tech found inside the 800 Series Diamond (the monitor speaker used at Abbey Road Studios, of all places).

A speaker for the ages

The new Zeppelin has been brought up to date with Alexa built-in, so you can ask the voice assistant to play a song of your choice, or to control your smart home devices – though there are physical buttons on the top of the speaker’s enclosure if you prefer.

You’ve also got AirPlay 2 and aptX Adaptive Bluetooth compatibility, so you’ll be able to stream high quality music from your iPhone or your Android device. For Spotify users there’s Spotify Connect, while the Bowers & Wilkins Music App gives you access to lots more music streaming services, such as Deezer, Tidal, and Qobuz.

The most interesting aspect of the new Zeppelin is that it’s built to last a long time. Its “digital brain” can be upgraded over time, with multi-room support being added in early 2022. That means you’ll be able to fill your home with sound by pairing the new Zeppelin with other speakers in the Bowers & Wilkins Formation range – and it also means that the speaker should last you a long time. And you’ll be glad of that when you find out how much it costs.

That’s no small amount to spend on a wireless speaker, but if it sounds anything like its predecessors, you can expect clear, natural-sounding audio that will fill a room with ease – and a striking design piece to boot.

Olivia is TechRadar’s Audio & Music Editor, covering everything from headphones to music streaming services. Based in TechRadar’s London offices, she’s a popular music graduate who worked in the music industry before finding her calling in journalism. She’s previously been interviewed on BBC Radio 5 Live on the subject of multi-room audio, chaired panel discussions on diversity in music festival lineups, and her bylines include T3, Stereoboard, Top Ten Reviews Creative Bloq, and Croco Magazine.  In her spare time Olivia likes gardening, painting, and hanging with her cat Ethel and golden retriever Dora.