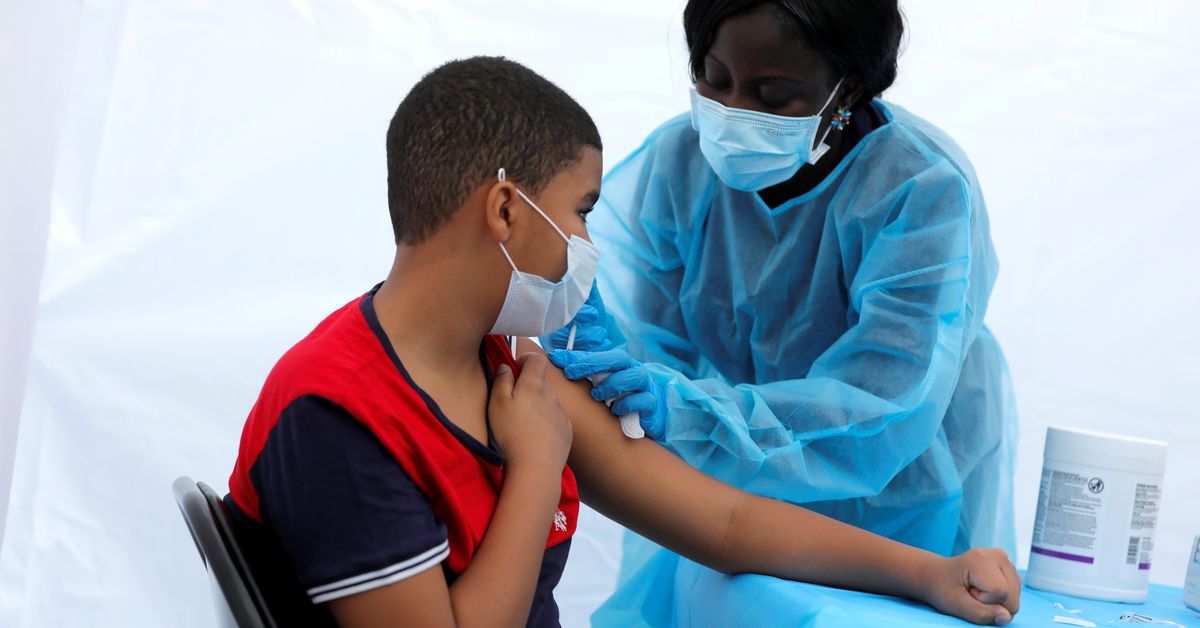 12-year-old Justing Concepcion receives a dose of the Pfizer-BioNTech vaccine for the coronavirus disease (COVID-19) from registered nurse Angela Nyarko, during a vaccination event for local adolescents and adults outside the Bronx Writing Academy school in the Bronx borough of New York City, New York, U.S., June 4, 2021. REUTERS/Mike Segar/File Photo

NEW YORK, July 21 (Reuters) – As part of a nationwide response to the threat posed by the more contagious Delta coronavirus variant, New York City will require COVID-19 vaccinations or weekly tests for workers at city-run hospitals and clinics.

The new policy will go into effect on Aug. 2, Mayor Bill de Blasio said at a news conference on Wednesday. The city will suspend without pay any employee who refuses to either get vaccinated or tested.

“Because of the Delta variant, increasingly the choice is between infection or vaccination, and that can mean the difference between life and death,” Dave Chokshi, the city’s health commissioner, said at the same briefing.

About 60% of the more than 42,000 employees of New York City’s public hospital system are vaccinated, Mitch Katz, who heads the nation’s largest public healthcare system, said on Wednesday. Across New York City, 70% of hospital staff have received both doses of the vaccine, state data shows.

The percentage of New York public hospital workers who are fully vaccinated is also lower the percentage of the city’s adult population, which stands at 65%, city health data shows.

In California, San Francisco took more decisive steps last month when it announced that all municipal workers in “high risk” settings such as homeless shelters and jails will have to get vaccinated by Sept. 15.

De Blasio said New York may take further measures if the threat posed by the Delta variant grows. He did not rule out extending vaccination or test requirements to all city workers in the future.

The highly contagious Delta variant that originated in India and has now become the dominant strain worldwide has been wreaking havoc among the nation’s unvaccinated population in recent weeks.

A NEW INFLUX OF CASES

Dozens of hospitals and health systems across the United States have issued vaccination requirements for their staff.

Last month, a federal judge dismissed a lawsuit brought by a group of workers at Houston Methodist Hospital in Texas over its requirement that they be vaccinated against COVID-19.

A large medical system in New Jersey has fired half a dozen employees because they did not get vaccinated against COVID-19, according to media reports published on Tuesday.

Several states with low vaccination rates such as Utah, Arkansas and Louisiana are once again facing outbreaks, and some hospitals warned they are overwhelmed by the influx of COVID-19 patients.

“We have an alarming spike in the number of COVID-19 cases across the Houston area,” Patti Muck, a spokesperson for Texas’ Houston Methodist, said in an email earlier this week. “The increased hospitalizations add stress to many of our hospitals that are nearing capacity.”

Coronavirus cases have nearly tripled over the last month and hospitalizations are up nearly 40%, according to an analysis of Reuters data. Deaths, which can lag behind other indicators, were down 14% over the same period of time.