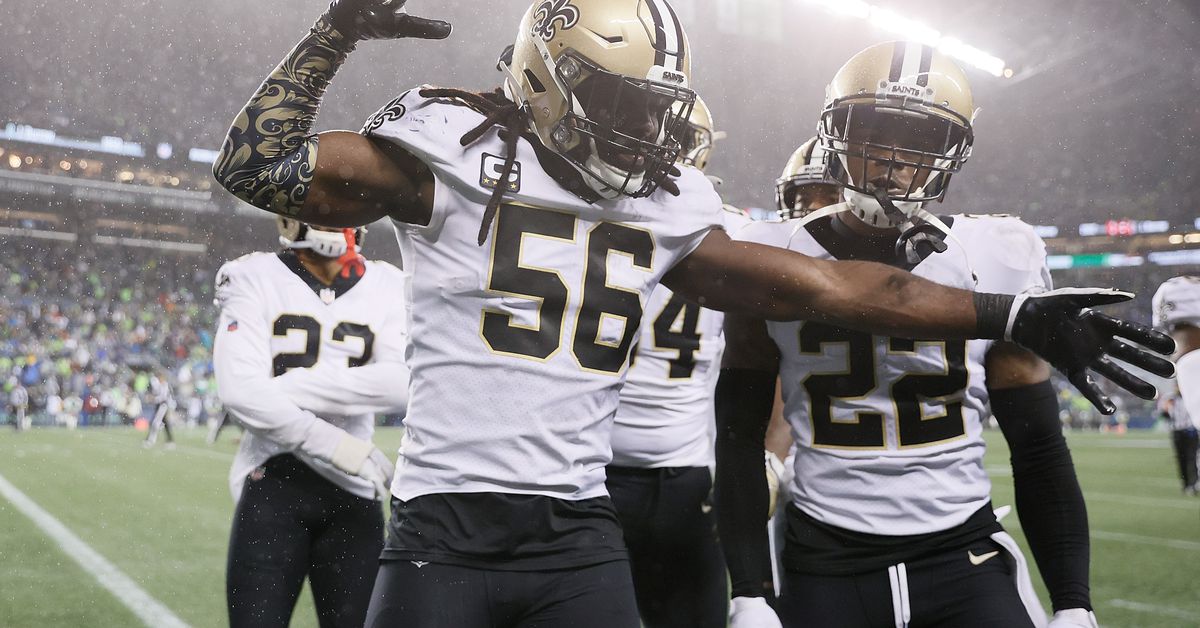 I generally make it a point to have an idea of how every team in the league is doing. I mean, after all, it is my job. That said, when the hell did the Saints get to 4-2? I mean, I know it happened — I watched Monday Night Football, but I still don’t believe it.

The remarkable thing about New Orleans is that I am absolutely confident this is the worst team with a winning record in the NFL. I mean, sure, the Saints beat the Packers to open the season when Aaron Rodgers had an out of body experience and an existential crisis at the same time — but this is also an organization who lost to the Panthers AND the Giants. Yes, those are this team’s two losses … the Panthers and the Giants.

Granted, winning on Monday night wasn’t exactly some huge test of strength. Seattle had issues before Russell Wilson’s injury, and with him sidelined every week is a fun adventure where I remember Geno Smith is still in the NFL. That said, it’s still a friggin’ win, and that’s all that matters in the end.

The Saints are in a really weird predicament, albeit a good one. If you looked at their schedule at the start of the season you’d probably circle that Packers game, and this Monday night against the Seahawks and mark them as losses. Now they’ve won both. Hear me out for a sec.

Moving forward the Saints have the following teams down the stretch:

Every single one of these games seems completely winnable. That would cause New Orleans to finish with a 10-7 record, and that’s assuming they can’t win any of their five other games. With the playoffs expanding to 14 teams, that might just get them in.

When you have a night like Kamara did AND make history at the same time you deserve all the props in the world. The Saints running back became the fastest player in NFL history to record 3,000 rushing yards and 3,000 receiving yards.

On Monday the Seahawks were able to button up everything else New Orleans threw at them, but not Kamara who feasted all night and finished with 51 rushing yards and 128 receiving yards.

Does anyone want to win this season? That’s not an actual query, or a rhetorical question — but a cry for help. It’s a guttural, visceral wail coming deep from my torso because every single damn time I believe in a team this season they come out and look like absolute dog shit.

Congrats Ravens, you played yourselves — and made me look like an idiot in the process. The latter is much easier than you might think, as I’m adept at making myself an idiot. The “played yourselves” part is far trickier, and takes some major skill at sucking. Seriously though, less than a week ago I was buying in and saw Baltimore as the potential breakout team in the AFC. After being blown out and embarrassed by the Bengals I’m not sure I have any faith in them making noise in the playoffs. To save myself the embarrassment once again I’ve chosen NOT to give Cincinnati props, which honestly Bengals fans should thank me for. I am a kiss of death.

That said, I need to give them some sort of recognition. An acknowledgment for absolutely dominating the Ravens and making them look like a JV team coming off a bye week. The most remarkable thing about the 41-17 drubbing is that Cincinnati didn’t really shut down Lamar Jackson. The Ravens’ QB was largely allowed to do his thing, generating 345 yards of the team’s 393 yards of offense — and really being the only bright spot on an otherwise dreary day.

What the Bengals did so well was continually bend, but never break. The team never allowed the Ravens’ offense to get settled into a scoring routine, and counterpunched with arguably the best game of Joe Burrow’s career. It’s funny because Burrow has comfortably fallen into the middle ground while everyone fawns over Justin Herbert, ignoring the former No. 1 pick. Now, it’s not like Herbert doesn’t deserve it — but more that it’s silly Burrow got forgotten in the shuffle. On Sunday he threw for 416 yards, with 201 of them going to Ja’Marr Chase — a handcuff which should be active for the next five years or more. Moreover, he did it all looking like an after dinner mint and a Florida retiree had a love child.

There’s a lot to be excited with when it comes to Cincinnati, and as an old man, this even exceeds the heady optimism of Carson Palmer in the early 2000s. Something special is brewing and I’m curious to see it play out.

As for the Ravens, they’re 5-2, which is still a damn good record and have a very favorable schedule on the horizon with the Vikings, Dolphins and Bears in the next three weeks — but it doesn’t feel like making the playoffs is the real test here, and rather what happens when Baltimore get there.

Look, I want to throw Atlanta bone here and there because they deserve it as the city with highest Waffle House-to-citizen ratio in the United States.

Seriously though, Pitts is starting to emerge and show why he’s everything analysts said he would be before the 2021 NFL Draft. I don’t care if it was against the Dolphins or not, when you’re a tight end who finishes with 163 yard receiving on seven catches it deserves recognition.

I know this year is weird because of the 17 game season, but Pitts is now on pace for 1,334 yards this season — only 82 yards off the all-time record. Keep in mind this was a slow build for Pitts too, who now has 282 of his 471 yards in the last two weeks. We are only scratching the surface of his potential and that’s damn special.

Hey Carolina, you deserve absolutely ZERO credit for getting blown out by the Giants. I don’t care how banged up you were, I don’t care who was missing. New York had way worse injuries than y’all did, and still managed to take you to the woodshed.

This was undoubtably the most embarrassing performance of the season for the Panthers so far, and they deserve to be mocked for it. Keep in mind this was also a revenge game of sorts, with the new Carolina regime going head-to-head with the old, led by Giants GM Dave Gettleman. The result was beyond ugly for the Panthers, who are now winless since starting the season 3-0, and there’s only one conceivable way this could get worse …

The Carolina Panthers have emerged as a player in the fluid Deshaun Watson trade situation, according to league sources. Whether they land the Pro Bowl quarterback, or the Miami Dolphins, prior to the NFL trade deadline remains unclear

Oh good, y’all found the way to make it worse.

Hey, remember when the Bears were a playoff team on the back of their strong defense and gritty attitude? Man, me too. What happened to that team? Instead we have a unit that can’t really do anything on either side of the ball, and it’s an utter mess.

Don’t get me wrong, Justin Fields’ “welcome to the NFL” experience has been rougher than even I expected, but I didn’t think we would see a team so bad on defense that the Buccaneers (as talented as they are) could hang 35 point on them in a half, then take their foot off the gas and put Blaine Gabbert in the game.

When ANYONE puts Blaine Gabbert in against you, they’re stunting on you. It’s just embarrassing, Chicago.

They won again. As I’ve established, when you’re unbeaten you keep getting props until the wheels fall off. I love that this offense is so good they can trade for Zach Ertz a week ago and he’s tied for top receiver on the team immediately.

Loser: Well, it might be the end of the road for the Chiefs

I know angry Kansas City fans are furiously tapping at their keyboards right now to try and explain some backbending scenario in which the Chiefs sweep their schedule and return to the Super Bowl — but I don’t want to hear it.

Y’all’s team sucks this year, now Patrick Mahomes is hurt. I don’t care if it’s just a week or a little longer, just punt on 2021 and play for another year.

The thing that’s become abundantly clear is that the Kansas City defense is too bad to even contend in the NFL. I don’t know if it’s even right to blame this on team building. The philosophy was clear: Kansas City thought the offense would be so good that they team could get away with a middling defense — and that hasn’t played out. Of course, this is largely because the defense hasn’t been middling, but rather “terrible.”

It was a miscalculation and the best play now might be to just play it all out, accept that the Raiders and Chargers are too strong in 2021, and retool this offseason. It’s all you’ve got.

This was a huge statement game for Mac Jones. I know beating the Jets is tantamount to clubbing baby seals who have blindfolds on, but doing the expected can be as important as surprising people.

In this case Jones did both. Remember that the narrative all week was that the Patriots were playing too conservatively. That Bill Belichick had “lost his edge,” and the result of that were these bland, middling New England performances. Always be careful when you give an angry old man who wears a sweatshirt every week some motivation.

The Patriots danced on New York with a 54-13 beatdown that saw Jones throw for 307 yards and two touchdowns. It was far and away the best performance of his rookie campaign so far, and made a statement too, in not only winning a divisional football game, but handing it to No. 2 overall pick Zach Wilson.

I don’t think the Patriots are good enough to make a run this season because of their receiving talent, but damn if I don’t think baiting Belichick is a dumb move. He made a point out of this one.

I love this play so much.

Not gonna lie, I thought Derrick Henry would run all over the Chiefs this week, which didn’t really happen — but he basically made up for it by throwing a touchdown that looks like a play you’d see in a beach game, not an NFL game.

This was a bowling shoe ugly throw, but it worked, so who am I to criticize it? It’s more that I love we had Henry throw a touchdown on a wildcat snap in one of the weirdest plays of the year, on a 1st and Goal no less.

Now, it’s easy to write this off as a dumb moment in a mediocre game, but I love that the Titans are showing a little swagger to take it to the Chiefs, knowing they’re good enough this season to get the job done. At the risk of cursing another team, let me just say that I like what Tennessee is doing right now.