NHL On Tap: Maple Leafs, Golden Knights look to get back on track

Home /Sports/NHL On Tap: Maple Leafs, Golden Knights look to get back on track 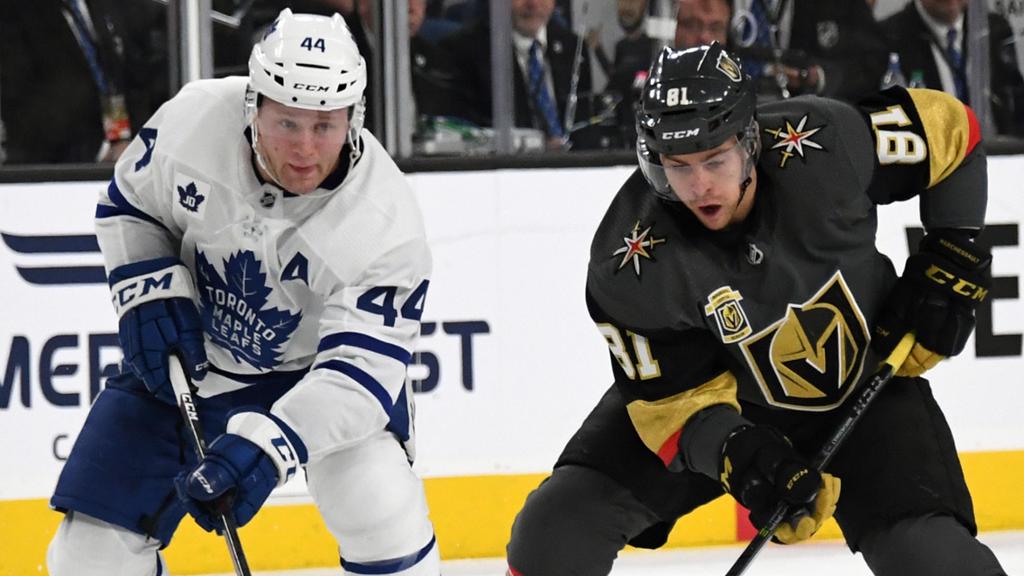 Welcome to the NHL On Tap. Three NHL.com writers will share what they are most looking forward to on the schedule each day. Today, their choices from the seven games Tuesday.

When NHL.com did its preseason predictions in September, I went with the Vegas Golden Knights over the Toronto Maple Leafs in the Stanley Cup Final. And while that prediction didn’t look great in the season’s early days, it doesn’t look bad right now. The Maple Leafs (22-8-3) are fourth in the NHL in points percentage (.712) and the Golden Knights (23-14-1) lead the Pacific Division. So, getting to watch them clash at T-Mobile Arena on Tuesday (10 p.m. ET; ATTSN-RM, TSN4, ESPN+, NHL LIVE) should be a treat. Each team is hungry for a win, too. The Maple Leafs are coming off a 5-4 overtime loss to the Colorado Avalanche on Saturday that ended a four-game winning streak. The Golden Knights lost to the Chicago Blackhawks 2-1 in their reunion with goalie Marc-Andre Fleury on Saturday and are 1-2-1 in their past four games. — Amalie Benjamin, staff writer

Evgeni Malkin will make his season debut when the Pittsburgh Penguins visit the Anaheim Ducks. (10 p.m. ET; SNE, SNO, SNP, BSW, ATTSN-PT, ESPN+, NHL LIVE). Malkin hasn’t played this season while recovering from knee surgery he had June 4. He’s been working his way back into game shape, using the past few weeks as his own training camp practicing with the Penguins (20-9-5). He was on the top power-play unit with Sidney Crosby, Jake Guentzel, Evan Rodrigues and Kris Letang in practice Monday. He was also the center on the second line between Jeff Carter and Kasperi Kapanen. The Ducks (19-12-7) are coming off a 4-3 shootout win against the Detroit Red Wings on Sunday. The Penguins had a 10-game winning streak end in a 3-2 loss at the Dallas Stars on Saturday. — Dan Rosen, senior writer

Two of the hottest teams in the NHL meet in an important Central Division battle when the Nashville Predators host the Colorado Avalanche (8 p.m. ET; BSSO, ALT2, ESPN+, NHL LIVE). The Predators (23-11-2) are first in the Central, one point ahead of the second-place St. Louis Blues and two up on the third-place Avalanche (22-8-2). Nashville has won four in a row and is 11-1-1 in its past 13 games. Goalie Juuse Saros has been the rock for Nashville; he is tied with Andrei Vasilevskiy of the Tampa Bay Lightning for first in the NHL with 19 wins and tied with Frederik Andersen of the Carolina Hurricanes for fourth with a .929 save percentage. The Predators have allowed two goals or fewer in each of their past eight victories. The Avalanche have won five straight and are 10-1-0 in their past 11 games after a 4-3 win against the Seattle Kraken on Monday. They lead the NHL, averaging 4.31 goals per game, and have five players who’ve scored at least 30 points this season, led by forward Nazem Kadri (46 points; 13 goals, 33 assists in 29 games). — Jim Cerny, senior editor

Ondrej Palat has scored four goals in the past three games for the Lightning (23-9-5), who are coming off a 5-2 loss to the Boston Bruins at home Saturday after wins against the Columbus Blue Jackets and Calgary Flames. Jack Quinn, the No. 8 pick in the 2020 NHL Draft, is expected to make his NHL debut for the Sabres (10-18-6), who are 0-3-2 in their past five games. Their last win came on Dec. 16, a 3-2 shootout victory against the Minnesota Wild.

Jonathan Huberdeau has scored 13 points (three goals, 10 assists) in a five-game point streak for the Panthers (23-7-5). That is tied for the most points over any five-game stretch in Panthers history. Forwards Brock Boeser and Elias Pettersson are expected to return for the Canucks (16-15-3). Vancouver goalie Thatcher Demko has won his past seven starts.

Patrick Kane has six assists in the past four games for the Blackhawks. The Blue Jackets have not won consecutive games since Nov. 22-26, when they won three straight.

It’s the third of four meetings this season and each team has one win so far. The Avalanche won 6-2 at home Nov. 27 and the Predators won 5-2 in Nashville on Dec. 16. Colorado forward Mikko Rantanen leads all skaters with four goals and six points in the two games.

Kris Letang has eight assists in his past four games for the Penguins. The Ducks have allowed at least 36 shots in five of their past six games and are 2-3-1 in that stretch.

The Red Wings (16-16-4) defeated the Sharks (19-16-1) 6-2 on Jan. 4, when Pius Suter and Tyler Bertuzzi each scored two goals. Detroit forward Dylan Larkin has an upper-body injury and likely will not play.