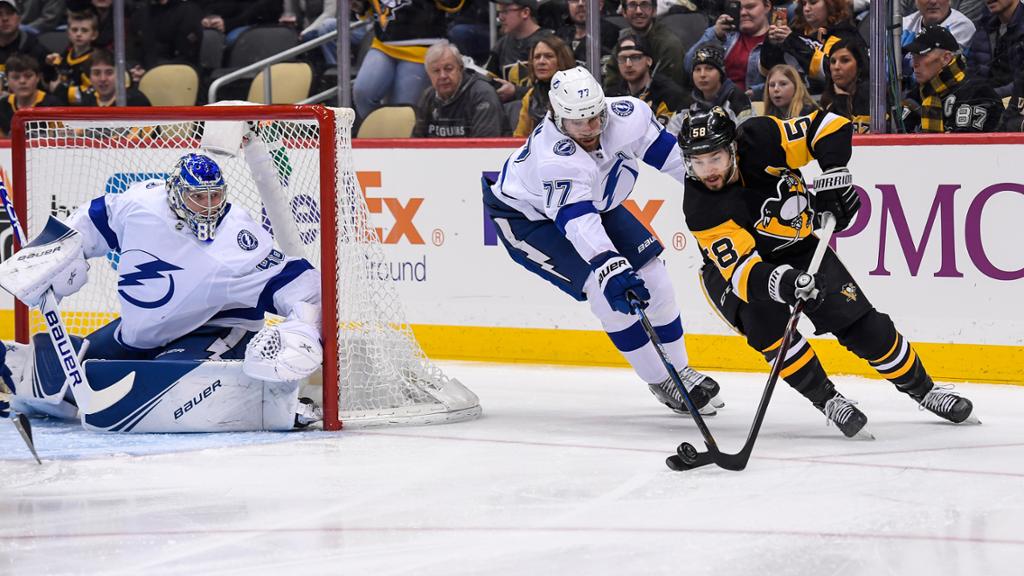 Welcome to the NHL On Tap. Three NHL.com writers will share what they are most looking forward to on the schedule each day. Today, their choices from the seven games Tuesday.

It couldn’t have been easy for the Pittsburgh Penguins to start the season without centers Sidney Crosby (wrist surgery) and Evgeni Malkin (knee surgery). Then they lost forward Bryan Rust (lower body) two games in, and center Jeff Carter and defenseman Kris Letang were in NHL COVID-19 protocol last weekend. None of it has stopped them from winning, and I want to see if the Penguins (3-0-2) can keep their point streak going when they host the Tampa Bay Lightning on Tuesday (7 p.m. ET; TVAS, ATTSN-PT, BSSUN, ESPN+, NHL LIVE). The Lightning are 2-3-1 and playing the second of a back-to-back after a 5-1 loss to the Buffalo Sabres on Monday. If the Penguins were concerned about scoring depth entering the season, they could be less so now, especially after a 7-1 win against the Toronto Maple Leafs on Saturday. — Tracey Myers, staff writer

Even though the honeymoon phase for the expansion Seattle Kraken (1-4-1) will continue for a while, they’ve lost four in a row (0-3-1) and cannot let the season get away from them. The Kraken host the Montreal Canadiens (10 p.m. ET; ROOT-NW, TSN2, RDS, ESPN+, NHL LIVE) after a 4-2 loss to the Vancouver Canucks on Saturday in the first game played at Climate Pledge Arena. They continued an inability to close out opponents in the third period, this time when the Kraken allowed three goals in the final 7:08 after taking a 2-1 lead. Montreal’s issues are far from over after a 6-1 win against the Detroit Red Wings on Saturday that ended a season-opening five-game losing streak. The Canadiens (1-5-0) face a stiff test with a four-game road trip at Seattle, the San Jose Sharks, Los Angeles Kings and Anaheim Ducks. — Jon Lane, staff writer

The Colorado Avalanche host the Vegas Golden Knights (8 p.m. ET; ESPN, NHL LIVE) for the first time since a six-game loss to Vegas in the best-of-7 Stanley Cup Second Round. Each team is looking to turn things around after sluggish starts this season. The Golden Knights (1-4-0) are last in the Pacific Division and have been outscored 16-6 during a four-game losing streak since a 4-3 win against the Kraken in the season opener. The Avalanche (2-3-0) are fifth in the Central Division and seek to build on a 4-3 shootout win at the Tampa Bay Lightning on Saturday that ended a three-game slide (0-3-0). Colorado captain Gabriel Landeskog is three assists shy of 300 in the NHL. — William Douglas, staff writer

The Flames have won the first three games of a five-game road trip after a 5-1 victory at the New York Rangers on Monday. Calgary forward Johnny Gaudreau has seven assists during a four-game point streak. The Devils are 3-1-0 on a season-opening five-game homestand.

The Lightning are 0-for-11 on the power play during their three-game losing streak (0-2-1) and they are allowing 4.17 goals per game, third-most in the NHL. The Penguins have scored 23 goals in five games, the highest in their first five to start a season since they scored 23 in 1994-95. Pittsburgh scored 24 goals in its opening five games of the 1992-93 season.

The Avalanche return home after a 1-2-0 road trip. Colorado forward Mikko Rantanen has scored one goal in each of his past three games and his five points are tied with Nathan MacKinnon for the Avalanche lead. The Golden Knights have lost four in a row, including 2-0 to the New York Islanders at home Sunday. William Karlsson is three goals from 100 since he was chosen by the Vegas in the 2017 NHL Expansion Draft.

The Predators return home from back-to-back weekend road games, including a 5-2 win against the previously undefeated Minnesota Wild on Sunday. They face the Sharks (4-1-0), who fell from the undefeated ranks with a 4-3 loss to the Boston Bruins on Sunday. San Jose forwards Logan Couture and Timo Meier each has scored eight points (three goals, five assists) during a five-game point streak to begin the season.

Wild forward Joel Eriksson Ek is one point shy of 100 in the NHL and defenseman Jonas Brodin needs one blocked shot for 1,000 in the League. This is the first of a seven-game homestand for the Canucks (3-2-1), who played their first six games on the road. Canucks forward Conor Garland has scored eight points (three goals, five assists) during a six-game point streak.

The Canadiens are last in the NHL averaging 1.67 goals per game, 31st on the power play (8.7 percent) and 30th in penalty killing (57.1 percent). Forward Jared McCann leads the Kraken with six points (three goals, three assists) in six games.