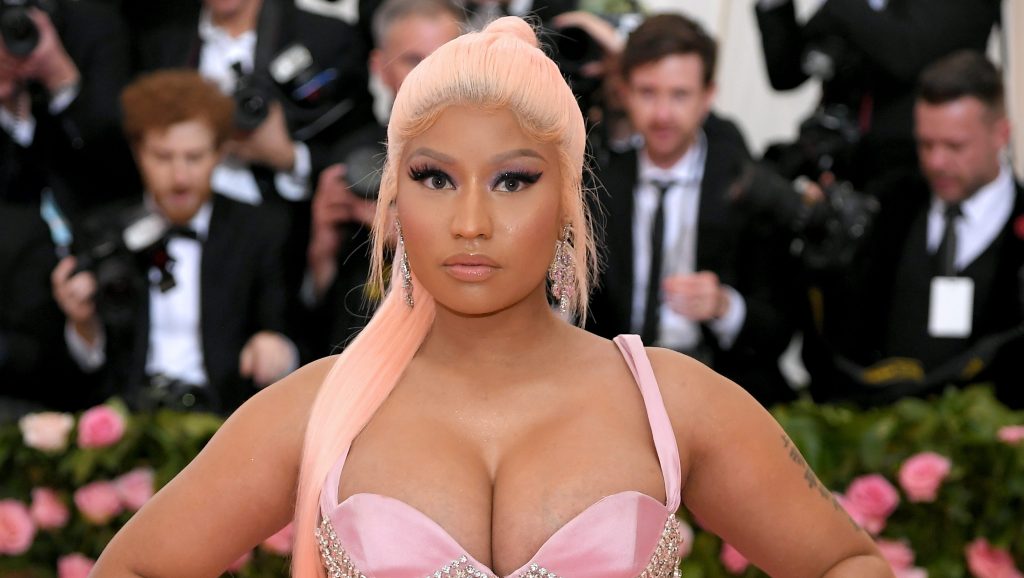 The 2021 Met Gala took place on Monday evening (Sept. 13) at the Metropolitan Museum of Art in New York City, drawing various entertainers and celebrities out to Anna Wintour’s annual celebration of fashion. However, one style icon that was missing from the event was rapper Nicki Minaj. In a series of Twitter posts, she attributed her absence to the Gala’s COVID-19 vaccination requirement, as well as the well-being of her infant son.

The 38-year-old, who remains unvaccinated, revealed that she had contracted the COVID-19 virus while preparing for the MTV Video Music Awards, causing her to skip out on her scheduled performance. She also pointed out that she had suffered similar symptoms to those who had contracted the virus even after being vaccinated, and is open to eventually getting vaccinated after doing her own independent research.

Love u babe. I was prepping for vmas then i shot a video & guess who got COVID? Do u know what it is not to be able to kiss or hold your tiny baby for over a week? A baby who is only used to his mama? “get vaccinated” Drake had just told me he got covid w|THE VACCINE tho so chile https://t.co/wInXoJcHBn

Babe. That’s not true. I had the exact same symptoms as ppl with the damn vaccine https://t.co/8Vg60ubZxx

They want you to get vaccinated for the Met. if I get vaccinated it won’t for the Met. It’ll be once I feel I’ve done enough research. I’m working on that now. In the meantime my loves, be safe. Wear the mask with 2 strings that grips your head & face. Not that loose one ?♥️

In another tweet, the Trinidadian-born artist recalled an incident in which a man allegedly experienced swollen testicles and became sexually impotent after taking the vaccine, resulting in his marriage being called off.

My cousin in Trinidad won’t get the vaccine cuz his friend got it & became impotent. His testicles became swollen. His friend was weeks away from getting married, now the girl called off the wedding. So just pray on it & make sure you’re comfortable with ur decision, not bullied

However, while pointing out that many countries have enacted mandates forcing employees to be vaccinated in order to work and provide for their families, Minaj said that in those cases, she’d recommend them getting the vaccine. She then set up a Twitter poll for her followers to vote on their vaccine recommendations.

I know babe. A lot of countries won’t let ppl work w/o the vaccine. I’d def recommend they get the vaccine. They have to feed their families. I’m sure I’ll b vaccinated as well cuz I have to go on tour, etc. https://t.co/7SK5Df0yBf

After catching wind of the comments, the Queens, N.Y. rep wasted no time in addressing Reid directly. In a quoted retweet of a clip of Reid’s segment, the “I’m Legit” rapper accused her of taking her words out of context and attempting to tear another Black woman down at the behest of white men.

You have been tweeting about me for an hour. You not #Tide yet? Mad I’m my own person? Mad the internet can’t scare me away? It’s always someone who looks like you. Polls are very much a part of research. Real experiences, Open dialogue, etc. Go put on your red nose clown tingz. https://t.co/orBJREaCv6

This is what happens when you’re so thirsty to down another black woman (by the request of the white man), that you didn’t bother to read all my tweets. “My God SISTER do better” imagine getting ur dumb ass on tv a min after a tweet to spread a false narrative about a black woman https://t.co/4UviONyTHy

Why would they bother to read when the lie is so juicy & provocative & got her dumb ass on tv. They got someone with black skin for a reason. They always use us against us. https://t.co/Cdr6YaYYQo

The “Seeing Green” artist’s next target was the media, whom she accused of falsifying headlines for sensationalism in response to a salacious headline by The Daily Beast, as well as being “paid” to “lie” on her in a subsequent post.

She also highlighted articles from several other publications, accusing them of also taking her initial comments out of context, before turning her attention back to Reid, referring to her as a “lying homophobic coon” while pulling up receipts of Reid’s own questionable past comments.

When television personality Meghan McCain jumped into the fray with a condescending response to one of Nicki’s tweets, the Barb went on the defensive yet again, telling McCain to “eat sh*t,” before ending her rampage with a smiley-face emoji.

? Pls show me where I said I’m “worried about” anything. Yes. I’m glad you guys get to see how the media REALLY works. I’ll have them contacted along with others. ?♥️? https://t.co/NKdJkQpswt

They’re being paid to do it. https://t.co/imxCetmpxe

I guess I can join in the reindeer games too right? Ppl can go on tv & lie on me, I can report on them, too right? ☺️. Doesn’t have to be truths. It can be half truths.

Uncle Tomiana asked who on earth would trust the US FDA guys…@JoyAnnReid pic.twitter.com/tt93FM85uc

With the impending return of Queen Radio and new music reportedly on the way, there’s a good chance we haven’t heard the last of Minaj’s social commentary and that we can expect additional reprisals from the always-outspoken artist very soon.