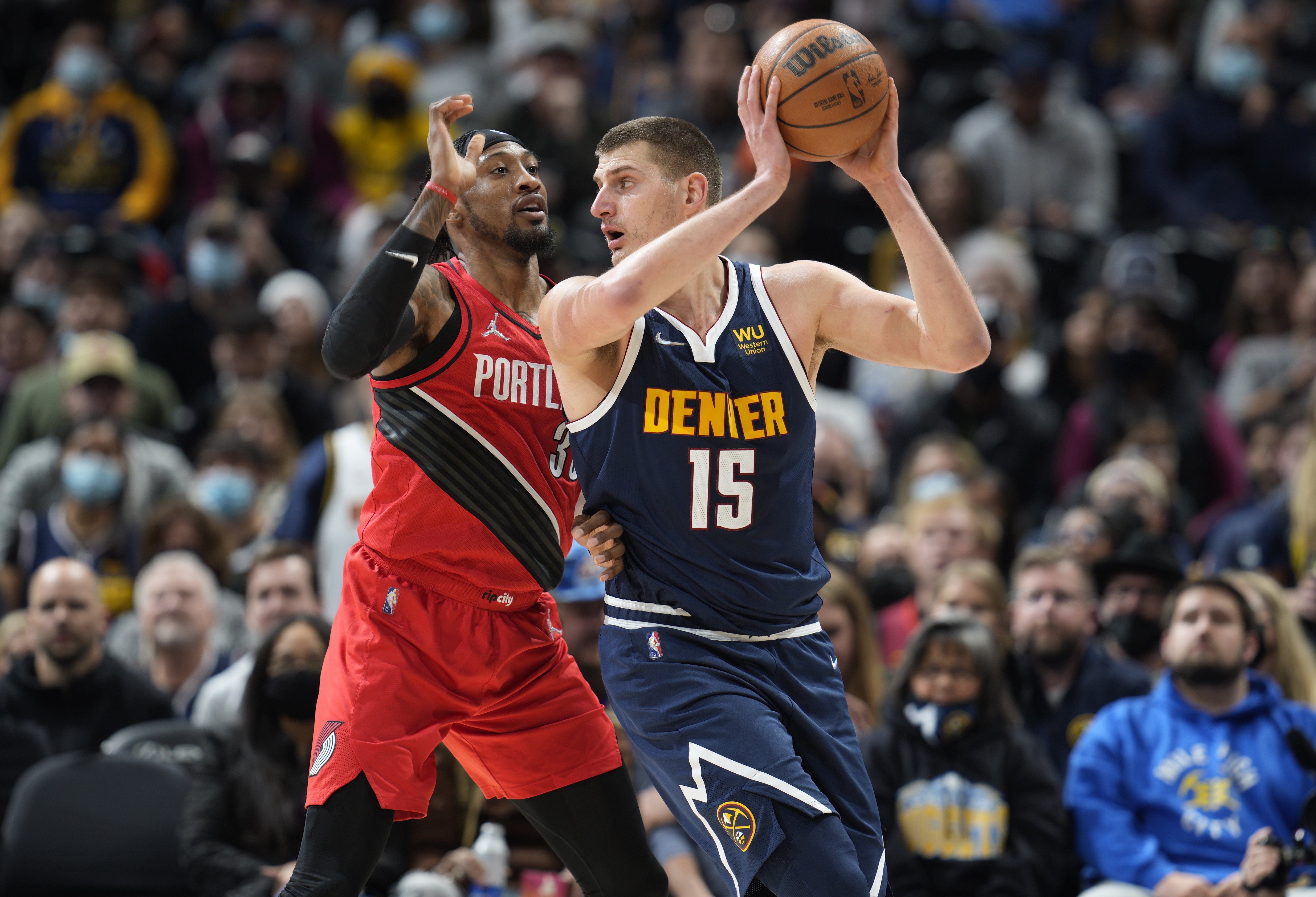 The Denver Nuggets sailed to a 140-108 home win over the Portland Trail Blazers on Thursday at Ball Arena.

The Blazers were significantly shorthanded.

As a result, Portland struggled. All five Blazer starters did score at least 10 points, led by Ben McLemore’s 18.

The 21-19 Nuggets have won three of their last four games. The 16-25 Blazers’ two-game win streak snapped.

Denver has an opportunity to get into a groove midway through this season with the team beginning a six-game homestand Thursday.

The Nuggets certainly got on the right track to start as they decimated the Blazers’ defense.

The paint was routinely wide open, and Jokic took advantage:

Jokic’s incredible passing talents were on full display once again too, as he found a cutting Aaron Gordon for a bucket:

Even when there was some resistance, it didn’t appear to matter much. Jeff Green notably turned back the clock multiple times on this night as the 35-year-old dunked all over the Blazers. He also had 15 first-half points.

Will The Thrill ➡ Uncle Jeff

Watch the @nuggets on TNT pic.twitter.com/iXot85oRA6

He leads the @nuggets with 15 PTS at the half on TNT! pic.twitter.com/usjkqJKgDr

The bench also had little issue with the Blazers’ second unit. Campazzo notably got away with a basketball nutmeg against Trendon Watford en route to the Denver bench outscoring Portland’s reserves 66-39:

Don’t do it to ’em like that Facu 😱 pic.twitter.com/hMkT6w2Bhf

Campazzo got away with a pass between Blazer forward Robert Covington’s legs too as he found Jokic for two in the third quarter:

Denver ultimately outscored Portland by at least four points in each quarter and even finished strong by posting 39 points to the Blazers’ 28 in the final frame.

The Nuggets were heavy favorites going into this one given Portland’s situation, but credit to Denver for putting its foot on the gas early and leaving no doubt who would win this game late.

There isn’t much to take away from Portland’s performance Thursday. They were missing their two All-Stars, their top backup guard, their No. 1 wing player and key members of the frontcourt rotation.

To put the absences in perspective, only three of the nine players who suited up for the Blazers in their 124-121 opening-night loss to the Sacramento Kings took part in this game (Jusuf Nurkic, Robert Covington, Nassir Little).

Still, the defensive effort left much to be desired, with the Nuggets getting wide-open looks all night. The game felt over after Denver scored 41 first-quarter points despite impressive offensive performances from McLemore (4-of-9 from three-point range) and Smith (7-of-12 from the field).

It called into question the team’s struggles on the road. Portland is 14-11 at home but just 2-14 away from the Moda Center.

The Blazers are still in position to fight for a play-in tournament spot with the bottom six teams in the Western Conference all having 17 or fewer wins, thereby making the race for 10th place wide open. But Portland has to make up nine road games to even out its ledger, and continued struggles away from home will only dig a deeper hole.

The other problem is those days of reckoning are coming up, with Portland playing its next five games on the road against Eastern Conference opponents. Four of those teams are .500 or better, so Portland could be looking at an extended skid through January.

If the Blazers play like they did Thursday, that’ll certainly happen, but this team is obviously capable of far better performances. The storyline of this season has also not been written yet with 40 games left to be played, so hope still springs for Portland despite a dreadful night in Denver.

Portland will head east to face the Washington Wizards at Capital One Arena at 7 p.m. ET. The Los Angeles Lakers will visit Denver at 9 p.m.