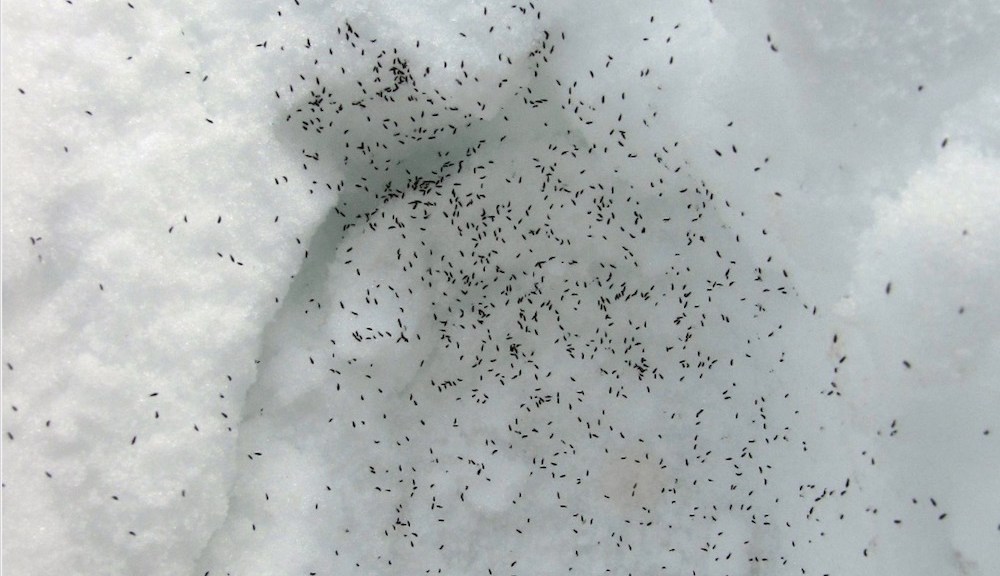 Yellowstone National Park posted an image on Facebook that appears as if “you lost all the poppy seeds off your bagel” atop a patch of snow. Others likened the tiny black specks scattered about in the snow to pepper.

So what is it, if not poppy seeds or pepper?

The post revealed that these odd sightings around Yellowstone are common on warm winter days and that they are snow fleas, also known as springtails.

“These tiny animals live in the soil and eat leaf litter and other organic material,” the Facebook post states. “In winter, they often appear on the surface of the snow—sometimes in a dusting like pepper, sometimes in thick clumps. They might be looking for food (poppy seeds, maybe?), but they haven’t been studied enough to know for sure!”

Commenters on Facebook were glad for the explanation, and some shared their experience with them. Among the comments:

“Yes! We were wondering what they are!”

“Hey, I found those in our home! I couldn’t figure it out for the longest time (2 years) what they were called. They’re annoying and very tiny and they look like a speck of dirt until it moves and it jumps!”

Also on FTW Outdoors: Rhino sneaks up on sleeping dog, gives it a scare in hilarious video

“One spring, I was in the woods looking for mushrooms, I keep hearing a sound like someone walking. Finally, I looked down and it was millions of springtails jumping on the leaves!! Made so much noise!!”

“I have never seen snow fleas until just now.”

“I thought I was looking at my brother-in-law’s grits after he was done with the pepper shaker.”

The Ecological Society of America offered this description of the tiny fleas: “But unlike fleas, springtails are not parasites; they feed on decaying organic matter in the soil (such as leaf litter) and, therefore, play an important part in natural decomposition. Snow fleas in particular are able to withstand the bitter temperatures of winter thanks to a “glycine-rich antifreeze protein,” as reported in a study published in Biophysical Journal.”

One final thought from someone on the Yellowstone National Park Facebook page: “Just be sure you don’t put them on your bagel.”