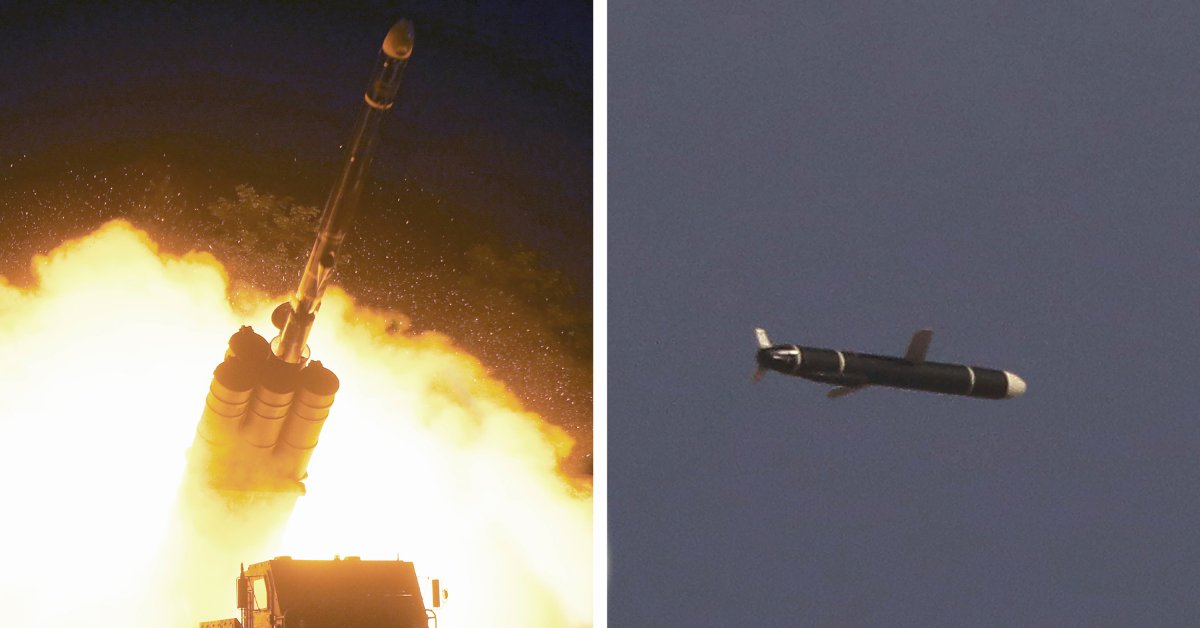 North Korea said it successfully test-fired a new model of long-range cruise missile this weekend, in the latest sign the regime is trying to bolster its capability for nuclear strikes against Japan and South Korea.

The missiles flew in “pattern-8 flight orbits” for more than two hours on Saturday and Sunday, covering some 1,500 kilometers (930 miles) over land and waters off North Korea before hitting targets, the official Korea Central News Agency said Monday. That range would be sufficient to strike most of Japan, and the KCNA report called the new missile a “strategic weapon of great significance.”

The tests, if confirmed, would be North Korea’s first reported missile launches since firing off two short-range ballistic missiles in March. They were announced as U.S. President Joe Biden’s nuclear envoy, Sung Kim, headed to Asia for talks with counterparts from Japan and South Korea aimed at bringing Pyongyang back to stalled disarmament talks.

The United Nations nuclear watchdog said last month North Korea had resumed from around July plutonium-producing operations at its Yongbyon nuclear facility. Pyongyang also staged its first military parade since Biden became president last week, with Kim Jong Un presiding over an event with scaled down displays of weaponry and no missiles.

Unlike ballistic missiles that fly in an arched trajectory and are not powered on descent, cruise missiles are powered throughout flight and are generally more maneuverable.

Jeffrey Lewis, the director of the East Asia nonproliferation program at the Middlebury Institute of International Studies at Monterey, said their ability to fly below the radar and evade defense systems fits with Kim’s goal of deterring a U.S.-led attack.

There have been no confirmation of the details offered by North Korea by the U.S. and its allies. South Korea’s Joint Chiefs of Staff said it was analyzing the reports in cooperation with American intelligence.

The U.S. Indo-Pacific Command said: “We are aware of reports of DPRK cruise missile launches. We will continue to monitor the situation and are consulting closely with our allies and partners,” referring to North Korea by its formal name.

Pyongyang has touted efforts to build up its tactical strike capability, with leader Kim telling a top ruling party meeting before Biden came to office in January that he was putting North Korea on a path to develop more advanced nuclear technologies and missiles. The plan included making smaller and lighter nuclear weapons and suggested a sweeping modernization of the country’s nuclear and conventional forces.

Although North Korea is barred from launching ballistic missiles under United Nations resolutions, its cruise missiles don’t face the same restrictions. Kim’s decision to scale back ballistic missile tests could make it easier for him to get back to the negotiating table with Biden, who has offered to reward the country’s disarmament steps.

North Korea’s description of the cruise missile as a “strategic weapon” implies nuclear capability, said Daniel Pinkston, an international relations lecturer at Troy University in Seoul and a former Korean linguist with the U.S. Air Force. “With a range of 1,500 km, it can strike all of Japan including the U.S. military bases on Okinawa, which certainly enhances Pyongyang’s ability to deter outside intervention for certain contingencies on the Korean Peninsula,” Pinkston said.

While the U.S. and its allies have systems to shoot down missiles, the new weapon could erode their ability to respond fast enough.

“The purpose of this system may be to further stress South Korean and Japanese missile-defense capabilities,” said Ankit Panda, the Stanton senior fellow in the nuclear policy program at the Carnegie Endowment for International Peace. He noted how cruise missiles, present a different set of detection and interception challenges from their ballistic counterparts.

North Korean showed off the new missiles in October 2020 during a military parade, Panda said, adding: “This missile is new, but its testing is unsurprising.”

Kim is struggling with an economy that has only gotten smaller since he took power about a decade ago in large part from sanctions to punish him for tests of nuclear weapons and missiles to deliver warheads. The North Korean leader has so far shown no interest in sitting down with the Biden administration, which has said it’s open for discussions and indicated it could offer economic incentives in exchange for disarmament steps.

“It’s North Korea’s way of yet again reminding us that pandemic and all notwithstanding, the regime will continue to hold on to its weapons capabilities for provocation and coercive purposes,” said Soo Kim, a Rand Corp. policy analyst who previously worked at the Central Intelligence Agency.