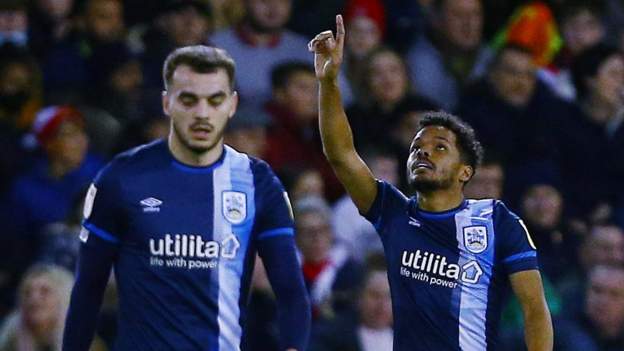 Huddersfield claimed a third straight win to strengthen their grip on a Championship play-off spot and condemn Nottingham Forest to back-to-back defeats for the first time under Steve Cooper.

Duane Holmes’ second goal in three games proved decisive, the winger exchanging passes with Harry Toffolo before firing a low first-half finish past Brice Samba at his near post.

Brennan Johnson wasted a glorious opportunity to equalise after the break, volleying a loose ball wide after Nicholls parried from Silva, as Huddersfield remain sixth while Forest stay ninth.

Huddersfield, buoyed by come-from-behind 3-2 wins over Bristol City and Blackpool in their previous two games, struck the woodwork inside 17 seconds as Sorba Thomas’ 25-yard effort crashed off the bar.

The visitors lost top scorer Danny Ward to injury early on and were fortunate not to go behind when Johnson headed tamely wide from a cross by Silva, the Portuguese impressing on his first start.

But the Terriers opened the scoring with a goal of real quality and the fact it came courtesy of an ex-Derby player in the shape of Holmes rubbed salt into the wounds for the home supporters.

Forest had lost only twice in 16 previous games since Cooper took charge in September, rising out of the bottom three and into play-off contention, but could not find a way a back in the hour that remained.

That they failed to level before half-time was down to the woodwork, with on-loan Watford winger Zinckernagel unlucky to hit the underside of the crossbar from 15 yards.

But they were also left to rue poor finishing, with Worrall and, in particular, Johnson, failing to hit the target with excellent openings in the Huddersfield area either side of the break.

The Terriers had chances to seal the points in the second half, Danel Sinani steering Jordan Rhodes’ square ball over after a Worrall slip and Samba tipping a 20-yard Lewis O’Brien strike over.

But they defended stoutly to keep Forest at bay in the closing stages with Nicholls rarely troubled as Huddersfield claimed a fourth win in their past six visits to the City Ground.

“I’m disappointed with the goal we’ve conceded because it’s a real feature of Huddersfield, how they score with crosses from the left-hand side, how Toffolo hits those sort of flat crosses into those areas.

“We did a lot of work on that over the last two days so to not adhere to what we’ve worked on is disappointing and from half-time at Middlesbrough to the end of this game it’s not good that we’ve not scored because we’ve created more than enough chances.

“That’s where the frustration lies but I also saw a lot of good things today, a lot of things I really liked and I won’t lose sight of that. The best team lost, that’s for sure.”

“I think in some moments of the game we understood how we want to play, and in some moments we found advantages in the middle of the pitch to allay the press of the opponents and attack more.

“But it is true that in some moments we conceded counter-attacks against a team that is really, really dangerous when they have spaces to run and get men in behind.

“In the first half we conceded some chances by mistakes we could have avoided and it was a game that was defensively demanding, and without a lot of work it would have been impossible to take the three points.

“In many moments of the game the team was playing how we want, and some losing of the ball created problems in the counter-attack, but it is a positive result to continue our run as a team.”