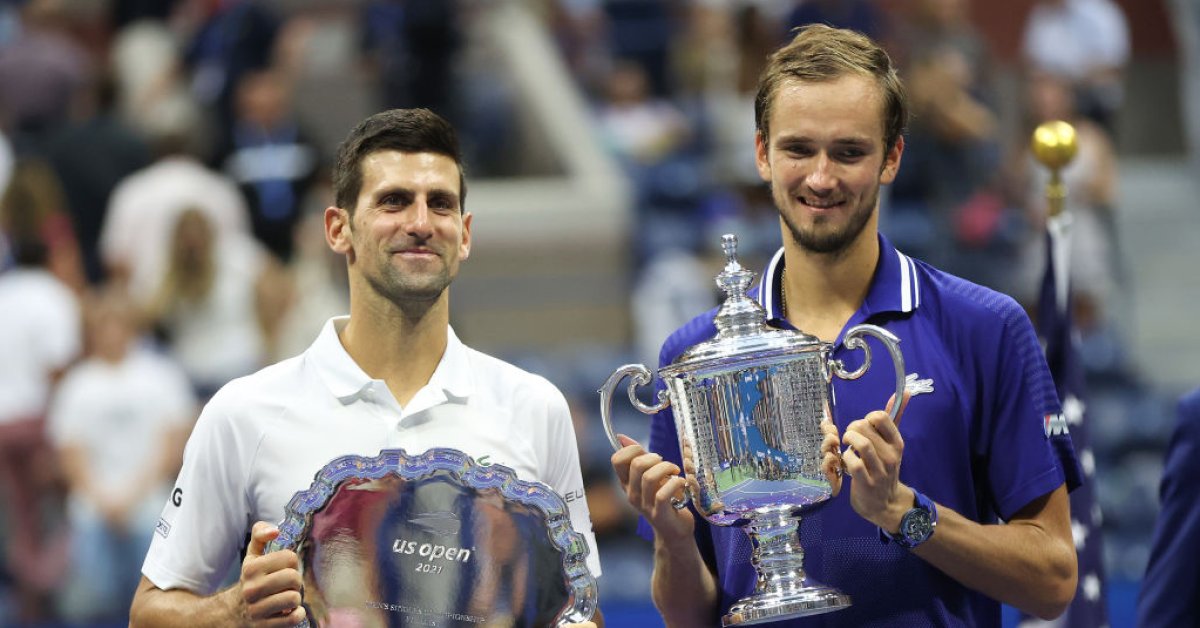 Rest easy, Rod Laver and Steffi Graf. Your Grand Slam accomplishments still remain unmatched this century. And after Daniil Medvedev of Russia obliterated Novak Djokovic in straight sets at the US Open men’s final on Sunday, 6-4, 6-4, 6-4, thwarting Djokovic’s attempt to win a fourth major tournament in a calendar year and clinch the coveted Grand Slam, one can’t help but wonder if we’ll see such a feat this century. Or the next one.

With all the pressures and expectations on athletes today, is it too much to ask one tennis player to string together those four consecutive major victories?

Laver was the last man to do it. He won the Austrian Open, French Open, Wimbledon and US Open in succession in 1969. Graf was the last player to pull it off. She won the Slam in 1988—and earned an Olympic gold medal that year, in Seoul, to boot.

Make no mistake: Medvedev, 25, was plenty responsible for Djokovic extending tennis’ Grand Slam drought. During service games, especially in the opening set, the rail-thin Russian—who stands 6-foot-6 and weighs just 182 pounds—rendered tennis’ all-time greatest returner, and a 20-time Grand Slam champion, all but obsolete. If you left your seat to buy a $20 US Open cocktail—or even blinked, really—you’d miss Medvedev winning another game. Djokovic broke Medvedev’s serve just once the entire match. Medvedev aced Djokovic 16 times; Djokovic had only six aces. “No serve, really,” Djokovic said, describing his own game, afterwards. Medvedev also mixed in clever drop shots, that sent Djokovic racing to hit balls long or into the net, with his power plays.

In the second set, Djokovic had a break point early, but strangely, the Arthur Ashe Stadium sound system went off during the point, causing the umpire to stop play. Medvedev won the new point, but Djokovic earned another break opportunity; Medvedev responded with a beautiful baseline winner. Djokovic bashed his racket after losing the next point, then lost the game. His emotional outburst failed to turn the set, or the match, around.

“I was just below par,” said Djokovic, who hadn’t enjoyed a straight set victory at the US Open since the second round, and played a five-set semifinal on Friday against Alexander Zverev of Germany. Medvedev, on the other hand, dropped just one set the entire tournament, in the quarterfinal last week. “My legs were not there,” Djokovic said.

Djokovic was about to go quietly in the third set, as Medvedev served for match point, up 5-2. The New York fans, however, had other ideas: they paid money to see Grand Slam history, not a clunker. So despite the exhortations of the chair umpire that the fans maintain their traditional silence, they started hollering and whistling while Medvedev served. At one point, Medvedev kind of shrugged at the chair ump: they both knew the manners of 20,000-plus people, some of whom whom undoubtedly had a Grey Goose or two, are impossible to control.

Medvedev double faulted twice, and Djokovic broke his serve to win the point, sending the fans into a frenzy. “It was definitely tough,” Medvedev said about the crowd noise. “I definitely made some double faults because of it.”

Djokovic has a complicated relationship with US Open fans. He seemed genuinely hurt that they didn’t seem to be pulling for him in the first round of the tournament. Here he was, going for Grand Slam history, and he receives a lukewarm reception? Some won’t ever forgive Djokovic for crashing the Roger Federer-Rafael Nadal hold on all the major championships about a decade ago. Fans had taken sides, and weren’t interested in a third-party interloper. And remember, Djokovic was kicked out of the US Open a year ago; he whacked a ball in frustration, and hit a line judge in the throat. Sure, it was an accident, but he wasn’t on his best behavior.

And let’s be real: Djokovic ticked off plenty of people when he held an exhibition tournament that was short on social distancing during the pandemic last year. Several players, including Djokovic himself, tested positive for COVID-19. His stance on vaccines—he’s expressed opposition to any COVID-19 vaccine requirements in tennis—also hasn’t endeared him to many.

At this point in the match, however, these issues were secondary: New Yorkers love nothing more than a happening, and witnessing the first Grand Slam in more than three decades fit the bill. So Djokovic was their guy. “Novak! Novak!” they shouted.

Djokovic held to make it 5-4, and Medvedev again double-faulted on match point, to make it 40-30 on the next game. But with the New York fans again whistling during his serve, Medvedev refused to unravel. He unleashed a 129-miles-per-hour rocket that could only backhand into the net. He fell to the ground on his side, having won his first Grand Slam tournament.

During the trophy ceremony, Djokovic seemed moved by New York’s reception. “Tonight, even though I have not won the match, my heart is filled with joy and I’m the happiest man alive because you guys made me feel very special on the court,” he said through more loud cheers. “You guys touched my soul. I’ve never felt like this in New York, honestly.” That’s coming from a player who has won the US Open three times.

Medvedev, for his part, apologized for spoiling the Grand Slam celebration. “I never said this to anybody,” he told Djokovic on the Ashe Stadium court, “but I will say it right now, for me, you are the greatest tennis player in history.”

Take that, Roger and Rafa.

Djokovic will have plenty of opportunities to back up that claim, and break his 20-Grand Slam tie with Federer and Nadal. Coming off a year in which he went 27-0 in Grand Slam tournament matches before Sunday, Djokovic can carry good vibes into next season. The calendar year Grand Slam, however, just proved too much. In fact, Djokovic felt a sense of relief after the loss.

“I was glad it was over,” Djokovic says. “Because the build-up for this tournament, and everything mentally and emotionally I had to deal with throughout the tournament the last couple of weeks, was just a lot.”

Djokovic could not have been closer to securing that elusive Grand Slam. But somehow, the Slam has never felt farther away.

Write to Sean Gregory at sean.gregory@time.com.