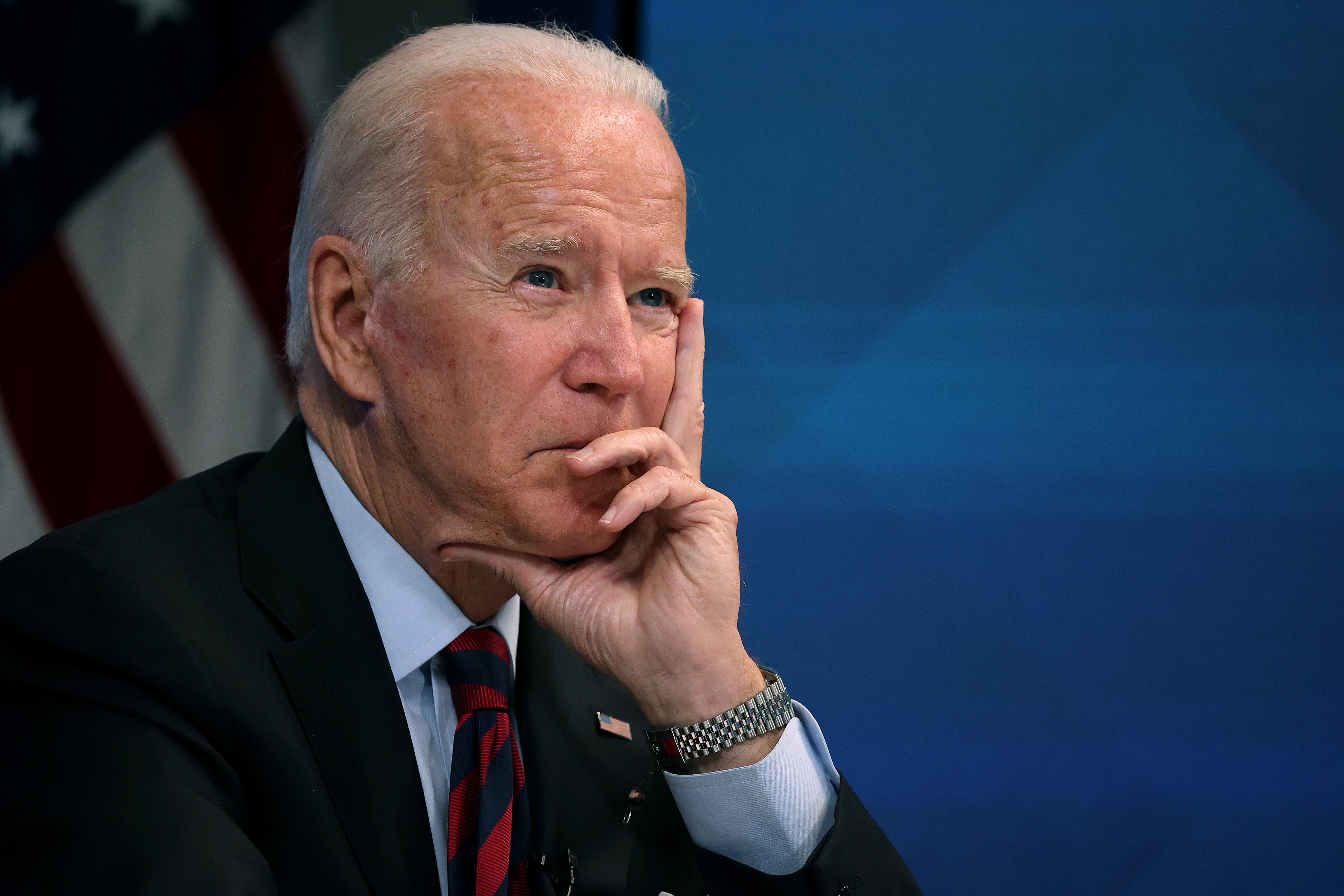 The hard part of Democrats’ massive
$3.5 trillion reconciliation package kicked off Thursday with multiple
congressional committees beginning their markups of the proposal. Democrats are
sure they’re going to pass something, although exactly what is way up in the
air. So the core questions at hand are not if the reconciliation package will
move forward but how big it will be and what taxes will be included.

There are ongoing fissures between
various factions within the party on the spending part of the package. Those
are well known. But more ominously, and less publicized, are the differences on
the revenue side. This is probably the most perilous part of passing any major
piece of domestic legislation.

President Biden has often argued
that the country needs to make an about-face on economic policy to benefit the
middle class and the poor. He’s argued for more public investment but also
effectively called for rethinking the decades-old idea that tax cuts are
universally beneficial. The taxation part of Biden’s $3.5 trillion
reconciliation package is essentially the biggest test yet for his
administration and Democrats in general. Can they finally pass something that breaks
from 40 years of tax-cut orthodoxy? And there are more specific tensions among
Democrats about the revenue side that span from the best-known Democrats in
Washington to the key committee chairs in the House and the Senate to the less
high-profile lawmakers. Waiting in the wings is the anti-tax conservative
opposition that is gearing up for a battle it is all too familiar with
waging.

Figures like Senators Joe Manchin and Kyrsten
Sinema, House progressives, the small block of House Democrats concerned with
removing state and local tax deductions, Senator Bernie Sanders, and the White
House have all voiced sticking points on various aspects of the package. It’s enough to
think the proposal is doomed. But Democrats argue that the package needs to
pass, and it will pass in some form.

“It’s a three-dimensional chess
game involving the left in the House, Manchin and Sinema, Pelosi, Schumer, and
Biden,” former Representative Barney Frank said in an interview on Tuesday. “I’m pretty
confident that they’ll wind up with something. It won’t be $3.5 trillion.”

Frank noted Manchin’s opposition to
the $3.5 trillion price tag, a position that Sinema is somewhat in line with.
Meanwhile, Sanders, who wanted a reconciliation package in the $6 trillion
range, says $3.5 trillion is already a major concession. Senate
Majority Leader Chuck Schumer has brushed aside Manchin’s call for a pause,
saying his caucus is “moving full speed ahead” with the $3.5 trillion plan
rather than paring it down. Other top Democratic lawmakers suggest that
the end result could be somewhere between
Manchin’s $1 trillion and the $3.5 trillion. But that leaves a whole lot of
wiggle room.

Democrats are also quick to note
the underlying differences between Senate Finance Committee Chairman Ron Wyden
and House Ways and Means committee Chairman Richard Neal. “Neal’s
a little more conservative about business,” Frank said. “[But] when you’re
talking about Neal and Wyden, you are clearly talking about two people who are very
committed to getting this done for a range of reasons—ideological, political,
their own personal accomplishment. So yeah, I think that’s an issue that will
be talked about, but I think it will get worked out again.”

The differences between Neal and
Wyden are essential and could decide the course of Biden’s overall package, as
well. Wyden is more aligned with the liberal wing of the party. Neal is
regarded as a bit more business-friendly. Wyden has proposed
a set of taxes on executive compensation, increasing the estate tax, and establishing
a tax on billionaires to pay for the reconciliation package. Neal and his
committee have been working on their own set of tax increases, and they have
largely kept quiet on them so far. Major differences between the two committee
chairs on revenue sources could extend the tax-writing aspect of the
reconciliation bill longer than it otherwise might be—and fuel anxieties among
shakier Democrats that an extended debate over taxes could roil the party
heading into 2022.

Arguably, a bigger intraparty
flashpoint is on state and local taxation, or SALT. The blueprint for the
reconciliation bill directs lawmakers to include a limit on how much taxpayers
can deduct from federal taxes. A group of 30-some lawmakers from states with
high tax rates have vowed to oppose the reconciliation package unless the cap
on deductions is gutted from the bill. On the other side, liberals see gutting
the limit as an effective tax cut for just the superwealthy.

In an interview earlier this
week, Democratic Representative Tom Suozzi of New York, who has been leading the “SALT
Caucus” told Bloomberg News, “I will support my progressive friends and the
Democratic caucus on big, bold initiatives, on getting things done to improve
people’s quality of life,” before adding, “no SALT, no deal.”

If these Democrats are serious,
their opposition could upend the entire reconciliation package. It’s not clear whether these Democrats really want to be responsible for tanking one of the key
policy pillars of Biden’s legislative agenda over a tax-deduction cap. Democratic leadership and the White House haven’t moved with the urgency one
would see if the threat were considered serious.

The White House has been circulating
a memo on Capitol Hill, obtained by The New Republic, promising that the reconciliation bill
will cut taxes for the middle class while effectively raising taxes on the
wealthiest Americans to set a fairer landscape. The White House plans to
make a national push in support of the bill.

“To do that, we aim to tell a clear
story about what the Build Back Better agenda will do to level the playing the
field for working people, make corporations and the wealthiest pay their fair
share and lower costs that are critical for working families, like prescription
drugs, home care, and child care; as well as the growing costs of climate
change,” the memo, authored by White House communications director Kate
Bedingfield, reads.

And last week a leaked chart of
possible revenue provisions for the reconciliation bill surfaced out of the
Senate Finance Committee. The chart included increasing the corporate tax rate
from 21 to 25 percent, allowing the top marginal income tax bracket rate to
rise less than three percentage points by 2025, estate tax reforms that would
cut loopholes for the estate tax, and updating Treasury Department regulations
to prevent “non-economic valuation discounts.”

Meanwhile, there’s a robust lobbying
and anti-tax effort underway, led by the U.S. Chamber of Commerce. Elsewhere, former
Democratic Senator Heidi Heitkamp is at the vanguard of an effort to kill the tax
increases on corporations and large inheritances in the reconciliation package.
Heitkamp has been making appearances on CNBC to make
the case, a continuation in her shift from the last of the moderate Great
Plains senators to former lawmaker to anti-tax Washington insider.

She’s not alone among former
Democratic legislators. “I’ve seen that some Democrats are looking to increase
taxes on corporations and wealthy individuals to pay for their spending, which
shouldn’t come as any surprise,” former Representative Nick Rahall, a Democrat from West
Virginia turned lobbyist, wrote
in the Charleston Gazette-Mail. “However, some of these provisions will
actually make it harder for our family-owned businesses and farms to stay open.”

And this is the kind of fight that
attracts the most famous anti-tax maven in American politics: Grover Norquist.
Norquist said his Americans for Tax Reform group is planning on “highlighting
the damage done by each of these taxes, talking to voters in districts where
the congressman or woman could decide to vote either against the whole package
or more likely be part of scaling it back.”

But Norquist predicted that in the
end something will pass. “Well, the D’s will pass something, they’ll pass some
tax bill, some spending bill,” Norquist said. “The question is what’s the spending
number? And Manchin gets to be part of that negotiation, so not $3.5.”

During the Ways & Means markup
on Thursday, Republican committee members were sounding the all too familiar
anti-tax tune and fomenting the red-blue divide. GOP Representative Drew Ferguson of Georgia
warned that the reconciliation bill would only help “liberal wealthy elites
build back better,” while rural America, hard-working entrepreneurs, and small
businesses would suffer, to the benefit of the country’s global adversaries.

The irony here is that the
reconciliation bill, at its current level, would direct massive amounts of dollars
to rural America. In addition, there’s the reality that raising taxes results
in, well, higher revenues. “The bulk of deficit reduction from all the budget deals of the
last 40 years came on the tax side,” Bruce Bartlett, an economist, historian,
and former Treasury official during George H.W. Bush’s administration, wrote in
an email to me.

Despite all the crowing about the dangers of increasing any taxes
at all, the record is pretty clear. The
last two presidents who saw deficit reductions were Democrats Bill Clinton and
Barack Obama. The last two presidents who left office having passed tax cuts saw
deficit increases: Donald Trump and George W. Bush. And, as Bush presided over
the Great Recession and Trump the pandemic downturn, it’s also the case that
Obama and (especially) Clinton oversaw better economic growth. Clinton’s 1993
budget bill, which raised taxes even on the middle class, was cited often by
economists in the 1990s as having helped kick-start the late-1990s boom.

Biden obviously wants to join Clinton and Obama rather than Trump
and Bush on this historical ledger, and indeed he proposes to go further than either.
But he and the Democrats have many hurdles to overcome first.