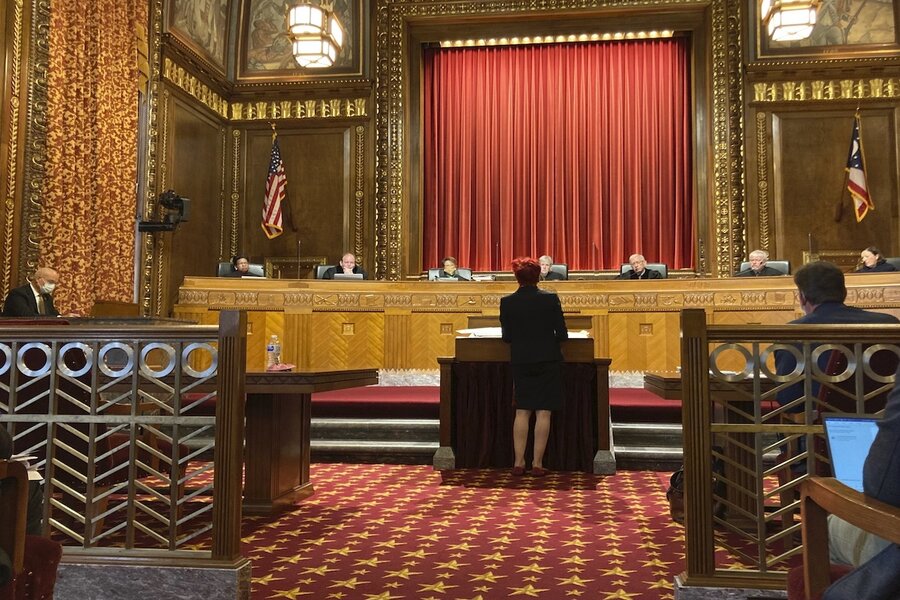 In the 4-3 decision, the Ohio Supreme Court returned the map to the Ohio General Assembly, where Republicans hold supermajorities in both chambers, and then to the powerful Ohio Redistricting Commission. The two bodies have a combined 60 days to draw new lines that comply with a 2018 constitutional amendment against gerrymandering.

Writing for the majority, Justice Michael Donnelly, one of the court’s three Democrats, wrote, “[T]he evidence in these cases makes clear beyond all doubt that the General Assembly did not heed the clarion call sent by Ohio voters to stop political gerrymandering.”

The court’s three Democrats were joined by Chief Justice Maureen O’Connor, a moderate Republican set to depart the court due to age limits at the end of the year.

The court’s three other Republicans – including Justice Pat DeWine, son of Republican Gov. Mike DeWine, a named plaintiff in the cases – dissented.

They said it was unclear how it should be determined that a map “unduly favors” one party over another.

The powerful redistricting commission was already in the process of reconstituting so it can redraw GOP-drawn legislative maps the court also rejected this week as gerrymandered. That decision gave the panel 10 days to comply, raising growing concerns about the looming Feb. 2 candidate filing deadline for the May primary.

In the Jan. 12 statehouse ruling, which also split 4-3, the court sent the maps back to the Ohio Redistricting Commission to take another crack at complying with provisions of a 2015 constitutional amendment requires mapmakers attempt to avoid partisan favoritism in state legislative redistricting.

This was the powerful Redistricting Commission’s first time drawing new legislative maps of 99 Ohio House, 33 Ohio Senate districts, and 15 congressional districts. Its members – five Republicans and two Democrats – failed to arrive at bipartisan consensus, so the maps they approved party lines was set to last only four years, rather than 10 years.

The maps the court tossed likely would have maintained GOP supermajorities in both statehouse chambers and given Republicans 12 or 13 of the 15 congressional districts.

It is not entirely clear what will happen if the commission – which has a poor record so far of hitting its deadlines – fails to meet the court’s target date.

The panel’s two Democrats, Sen. Vernon Sykes and Rep. Emilia Sykes, his daughter, said the ruling on the statehouse maps confirmed Democrats’ contention that the lines were “unfair, unrepresentative, and unconstitutional.”

Governor DeWine, a member of the commission and whose son was among Wednesday’s dissenting justices, pledged in a statement to “work with my fellow Redistricting Commission members on revised maps that are consistent with the court’s order.”

Writing for the majority in the statehouse district case, Justice Melody Stewart, a Democrat, said the maps favored one party and didn’t meet the 2015 amendment’s standard that the districts must be proportionally distributed to reflect Ohio’s 54% Republican, 46% Democratic voter mix.

Justice O’Connor provided a pivotal swing vote in both cases.

Writing separately in the statehouse case, Justice O’Connor reminded Ohioans that amending their Constitution again is an option if they think the new system they have put in place has failed them – either because it led to gerrymandered maps or, as the court’s minority asserts, that it gave the court no teeth to rule against them. Ohio could have a nonpartisan redistricting commission, for example.

Republicans who controlled the map-drawing process had argued the commission met its constitutional mandates by complying with a host of other protocols, which made the partisan favoritism and proportionality provisions moot.

In their dissents, the court’s three remaining Republicans argued that the majority in the statehouse case was grasping at a “sweeping power of judicial review” not available to the court under the provisions of the 2015 constitutional amendment.

“The text of the Ohio Constitution is clear, and given the allegations in the complaints, this court lacks the authority to act as requested by the petitioners bringing these cases,” Justice Patrick Fischer wrote.

Both the 2015 and 2018 constitutional amendments at the heart of the cases were backed by the state’s Republican and Democratic parties and passed in referendums with more than 70% of the vote.

The decision impacts three separate lawsuits against the maps brought on behalf of Ohio voters by a host of national groups, including the National Democratic Redistricting Committee, the ACLU, the League of Women Voters, CAIR-Ohio, and the Ohio Organizing Collaborative.

Freda Levenson, legal director for the ACLU of Ohio, said the decision sent a clear message to lawmakers that they can’t “put politics over people.”

“The Ohio Supreme Court’s decision is huge,” she said in a statement. “It not only orders the immediate drawing of a new, constitutional map, but it also validates that Ohio’s voter-enacted constitutional prohibition that partisan gerrymandering is not merely ‘aspirational’ – it has real teeth. This bodes well for the 2022 election cycle – and beyond.”

Alicia Bannon, director of the Judiciary Program at the Brennan Center for Justice, which helped represent plaintiffs in one of the lawsuits, said the court held the commission accountable.

“The General Assembly maps entrenched a GOP supermajority and flouted clear partisan fairness requirements in the Ohio constitution – abuses that especially impacted Ohio’s Black, Muslim and immigrant communities,” she said in a statement. “The commission is now tasked with drawing replacement maps. We will be watching to ensure that all Ohioans get the fair representation they are due.”

This story has been updated to include details about the Ohio Supreme Court’s decision on the state’s congressional maps.

What Are the Oldest Fossils in the World?
How to See Which Android Apps Are Taking Up the Most Space