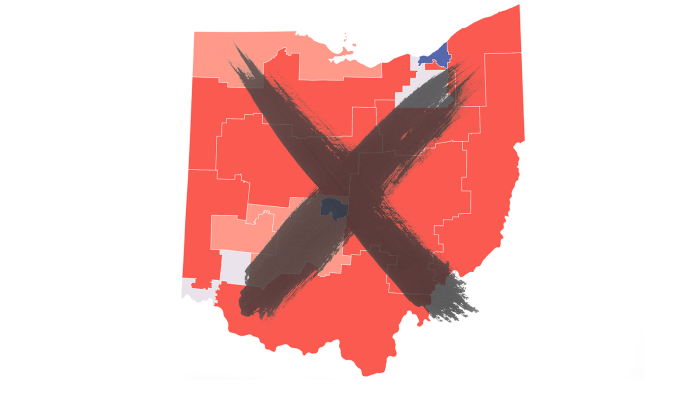 Twenty-six states have now gone through the process of drawing and approving new congressional districts, but at least nine of those states were slapped with lawsuits on the grounds that the approved maps are gerrymandered or otherwise illegal. And in a potential sign of things to come, the first of these maps was overturned today.

On Friday morning, the Ohio Supreme Court ruled that Ohio’s new congressional map violated the partisan-fairness requirement in the state constitution. The map that was rejected would have created 11 Republican-leaning seats to only two Democratic-leaning seats (plus two highly competitive seats), which is not proportional with Ohio’s light-red partisan lean. The rejected map also had an efficiency gap (a measure of which party has fewer “wasted” votes — i.e., votes that don’t contribute toward a candidate winning) of R+16, indicating a strong bias toward Republicans.

Ohio could be just the first state to see its new congressional map overturned, too. As the table below shows, several states rate even more poorly than the Buckeye State on measures of map fairness, and many of those maps are already being challenged in court.

To help give you an idea of which maps might be in danger, we’ve added an “In Litigation” label to both the national page of our redistricting tracker (in the table about halfway down the page) and each applicable state page.

Perhaps the map most likely to get overturned outside Ohio is North Carolina’s, which made 71 percent of the state’s congressional districts Republican-leaning even though it gave former President Donald Trump only 50 percent of the vote in 2020. A lawsuit that argues the map is an illegal partisan and racial gerrymander is currently making its way through the North Carolina court system and is expected to be decided by the state Supreme Court, which has a 4-3 Democratic majority and a history of overturning the GOP legislature’s congressional maps.

In this way, the decision in Ohio could be a turning point for the overall narrative of the 2021-22 redistricting cycle. Up to this point, it was somewhat ambiguous which party had gained seats from redistricting (going by FiveThirtyEight partisan lean,

Partisan lean is the average margin difference between how a state or district votes and how the country votes overall. This version of partisan lean, meant to be used for congressional and gubernatorial elections, is calculated as 50 percent the state or district’s lean relative to the nation in the most recent presidential election, 25 percent its relative lean in the second-most-recent presidential election and 25 percent a custom state-legislative lean.

The nullification of Ohio’s map, though, raises the possibility that this status quo won’t be preserved and that Democrats could emerge from this redistricting cycle on a more even House playing field. Of course, a lot still needs to happen for this to come true. First, Democrats would need favorable court decisions in North Carolina or other states.

Another big factor will be what Ohio’s eventual map looks like. A proportional map — say, one with eight Republican-leaning seats and seven Democratic-leaning ones — could net Democrats three additional seats on its own, but this is unlikely to become reality. The court ordered that the Ohio legislature take another crack at drawing the lines, and since the legislature is controlled by Republicans, it will likely still draw a map that buoys the GOP, but modestly enough to pass legal muster.

Regardless of where the dust settles in Ohio, however, Friday’s decision is a reminder that the book doesn’t necessarily close on redistricting when a new map is approved. The courts are the true final phase of the redistricting process, and with the ruling in Ohio, that phase has now officially begun.

One Year In, Biden’s Approval Rating Is In Trouble — Only Trump’s Was Lower
To Tell the Truth: NBC Report on Transgender Athletes Deliberately Misleads Through Omission