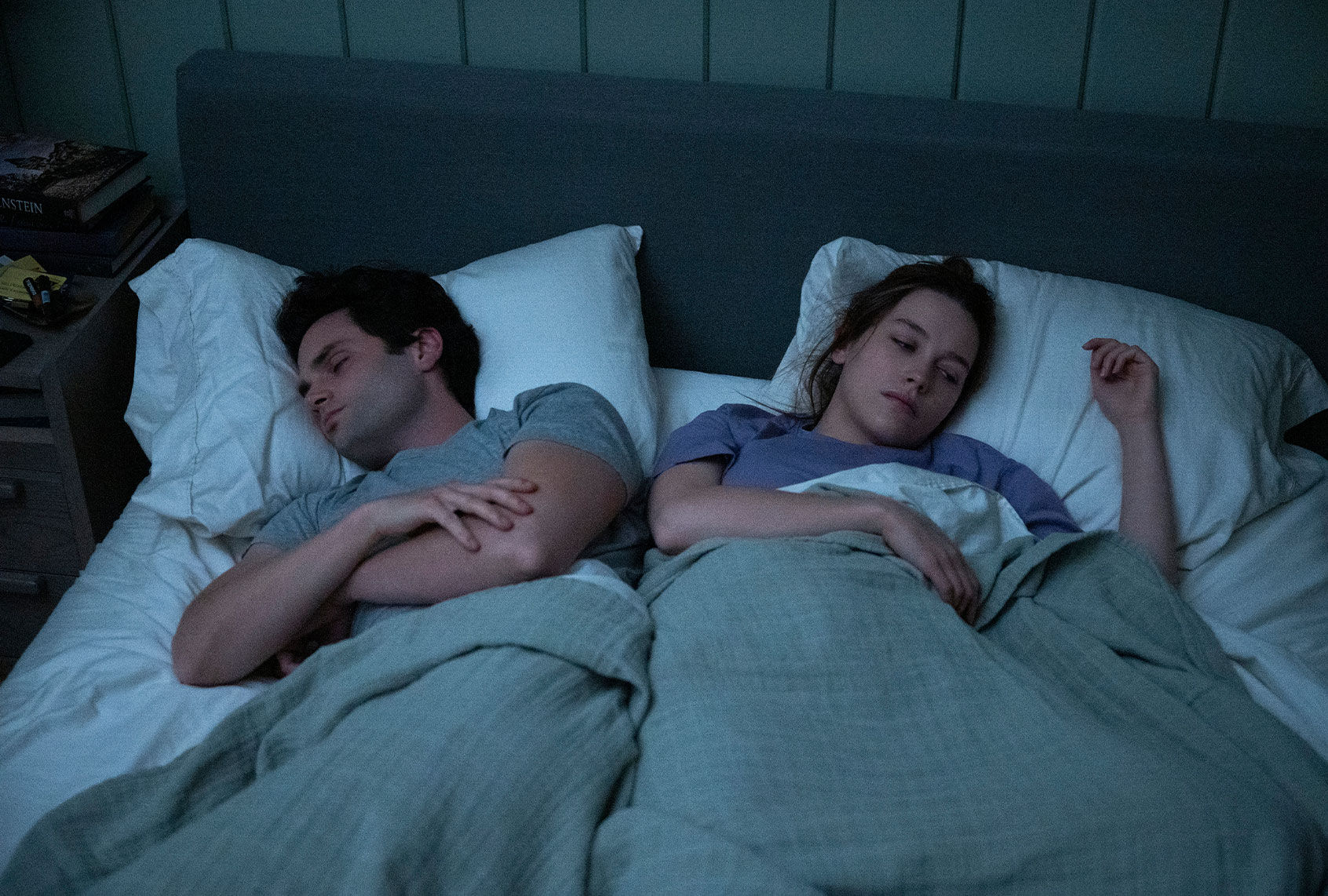 Joe and Love try to make their odd relationship work. They leave behind a bloodbath in Los Angeles to start anew in a San Francisco-adjacent town called Madre Linda. This suburban, Silicon Valley hell provides the blissful facade for their married and co-parenting life, but soon dissatisfaction creeps in. They try couples therapy. They try cheating — Love with their college-age neighbor Theo (Dylan Arnold), and Joe with Theo’s stepmom Natalie (Michaela McManus) and his librarian co-worker Marienne (Tati Gabrielle).

But when this infidelity can’t fix what’s between them, each starts to commit unforgivable acts, and none of their Lululemon-clad, tech industry titans for neighbors are safe from them. Frankly, given both of their pasts, we all knew this Norman Rockwell painting of a relationship would quickly devolve more into the realm of Norman Bates. And at some point, you really can’t help but wonder if Love, Joe and their eventual victims would have been better off if the couple had just reevaluated the parameters of their marriage.

By the end of Season 3, Love and Joe embark on a foursome in an effort to save the marriage that they’ve both become increasingly bored with. They set up a sexy night with their insufferably privileged, preachy neighbors, mommy-blogger Sherry (Shalita Grant) and her tech-bro husband Cary Conrad (Travis Van Winkle).

The foursome doesn’t work out, to put things lightly. The moment Joe and Sherri share a kiss in front of Love, she spirals out almost immediately, leading Love and Joe to have a loud conversation which includes a confession that Love killed Natalie. Sherri and Cary overhear this conversation, because of course they do, and all hell breaks loose, leading to their ultimate imprisonment by Love and Joe.

In other words, Love and Joe’s brief stint with polyamory was the beginning of the end of their life together in Madre Linda. But this shouldn’t be an indictment on that relationship practice. Polyamory doesn’t always look like what we saw onscreen, and there are other ways the couple could have experimented with opening their marriage in ways that could have actually saved rather than doomed it. There’s a reason young people and a new generation are increasingly opening their minds and experimenting with polyamory in their dating lives.

In this season of “You,” the crux of the Love and Joe’s issues arguably isn’t that they don’t want to be together anymore. They make solid progress in their couple’s therapy sessions early in the season, both prioritize their son above everything, and they always have each other’s backs when it comes to covering each other’s crimes (fodder for valentines!). But they’ve come to find their life in Madre Linda insufferably boring, and of course, no matter who Joe is with, his eye will always wander. He always has to find a new woman to become obsessed with, and this woman thus becomes “you” in Joe’s spine-chilling internal monologues.

Specific to “You,” polyamory could have served as a unique antidote, both to Love and Joe’s boredom, and Joe’s addiction to fixating on new women. Even prior to this season, the chaos and killings that drive “You” have all been rooted in Joe’s violent compulsion toward monogamy. His life revolves around the need to put one person — “you” — on a pedestal above all else, a destructive behavior that societal pressure to adopt monogamous lifestyles can sometimes subliminally encourage.

Much of the stigma and confusion around polyamory and what it entails is a result of generations of treating monogamy as the only way. This isn’t true for everyone, and whether he admits it or not, monogamy certainly isn’t for Joe. And, despite how conservative and traditionalist perspectives often decry polyamory as radical and extreme, as Joe demonstrates, monogamy and any kind of obsessive fixation on one person, and one person alone, can be taken to an extreme, too.

It’s clear both Love and Joe want to pursue relationships and sexual encounters with other people, while staying together and remaining committed to their family — and there’s no reason they couldn’t have had both. But polyamory isn’t just jumping into connections with other people without thinking of your partner, if you actually do care about them. One cannot merely go from monogamy to an open relationship without having the proper conversations and assessment (how jealous are the individual partners?), things could have gone differently.

With some better communication and setting of ground rules, polyamory might have saved Love and Joe’s relationship, and certainly saved some of their victims this season. Therefore, rather than engage in a foursome in which they would have to witness their partner be intimate with other people, they could have just communicated their mutual desires to have other romantic or sexual partners, while remaining together. They could have given each other permission to pursue these relationships as long as they ensured their affairs remained private from each other, since witnessing each other with another partner, at least in Love’s case, seemed to cause, well, problems.

It’s entirely possible that nothing, not even an open marriage, could have saved Love and Joe’s ultimately doomed relationship. But many couples have faced problems like what Love and Joe faced — minus the murders and cover-ups and all — and overcome these problems with open communication, and understanding that monogamy doesn’t always work for everyone, no matter how much they may care for and want to be with someone. If Love and Joe had communicated their desires and come to an understanding that worked for both of them, their jealous, murderous impulses might have been kept at bay, and they might both even have become satisfied with their lives.

As polyamory is increasingly demystified and destigmatized, especially among young people, a core reason that some people seek it out could arguably be relevant to all romantic relationships. Specifically, no matter how solid a relationship is, it’s not healthy for that to be the only significant relationship in someone’s life — whether in the form of other romantic relationships, close friendships, or familial bonds, we should always have other relationships beyond The One. It’s unfair to that one person, not to mention a lot of pressure.

If Love hadn’t centered her world around Joe, and if Joe didn’t obsessively need to center his life around every other mysterious, new woman he encounters at the supermarket, two of the craziest characters on television might have actually turned out semi-normal. And that might just be why this season of “You” ultimately chose to go a different route.

“You” season 3 is now streaming on Netflix.