One Year In, Biden’s Approval Rating Is In Trouble — Only Trump’s Was Lower

Home /General/One Year In, Biden’s Approval Rating Is In Trouble — Only Trump’s Was Lower 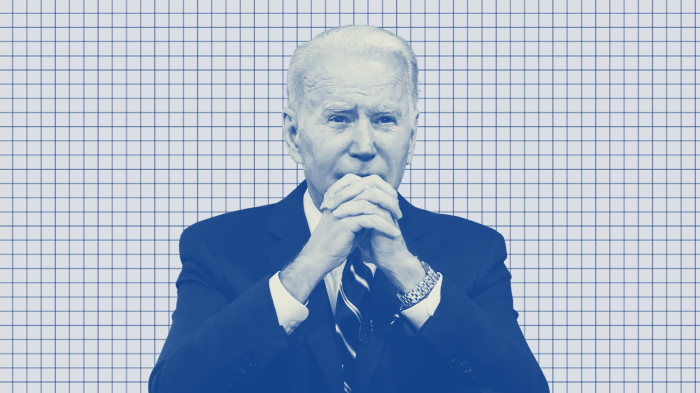 Next week, President Biden will hit the one-year mark of his presidency. While Biden has overseen notable accomplishments in that time, such as the passage of a $1.9 trillion coronavirus relief package and a $1.2 trillion bipartisan infrastructure deal, other challenges have overshadowed those feats: Perhaps most significantly, the fact that the COVID-19 pandemic has not subsided. The latest mutation of the virus, the highly contagious omicron variant, has led to a spike in cases as well as continued economic uncertainty, inflation, and supply chain troubles. Democrats have also struggled to pass key parts of Biden’s legislative agenda, including an ambitious $1.75 trillion social spending plan and voting rights legislation that would counteract 2021 laws passed by GOP-controlled state legislatures that make it harder to vote and easier to interfere in elections.

It’s hard to know how this all factors into Biden’s job approval rating, but broadly speaking, the public is dissatisfied. And it has been for a while now, too, as Biden’s approval rating has hovered in the low 40s for nearly three months, with roughly 42 percent of Americans currently approving of his job performance and 51 percent disapproving, according to FiveThirtyEight’s presidential approval tracker.

Looking back at recent presidents, this development is particularly troubling for Biden, as he has the second-lowest approval rating of any president one-year in. Only Donald Trump, whose approval rating was in the high 30s, had a lower rating.

We only plotted the last four presidents and Biden to keep the comparison relatively recent, but this holds true for every president in the polling era that we have data for (so back to Harry Truman).

In our highly polarized political environment, it’s hard to imagine quite the same “rally around the flag” effect — the coronavirus pandemic didn’t produce much of one, for instance. Yet as former President Bill Clinton’s approval rating showed, presidents can see an improvement after sliding significantly. A few things just need to go their way — in Clinton’s case, public sentiment regarding the economy improved, which helped his numbers recover, at least for a time.

That said, Biden will likely have to improve in areas that have long-hampered his administration in order to see his approval rating increase. Biden’s approval rating did markedly tumble last August after the Taliban captured Kabul in Afghanistan amid the withdrawal of U.S. troops, but that also coincided with the spread of the delta variant in the U.S. Moreover, prior to last summer, there were already suggestions of cracks in Biden’s support among almost every group of Americans, especially independents and Hispanics.

The biggest problem for Biden, though, might be his handling of the coronavirus pandemic. While this was once one of Biden’s strongest issues, the public has steadily soured on his management of the crisis. In fact, according to FiveThirtyEight’s coronavirus presidential approval tracker, Biden’s approval rating on COVID-19 dropped below his disapproval rating for the first time earlier this week.

In the face of the omicron surge, many Americans are now even more pessimistic that the pandemic will be ending soon. Many states and communities have also reinstituted COVID-19 social distancing policies, such as mask mandates and remote schooling — the latter of which, polls suggest, has made few people happy. Economic concerns have largely worked in tandem with COVID-19 worries, especially inflation, which is the highest it’s been since the early 1980s. While the current rate is not nearly as high as it was then, ongoing inflation has notably jacked up the price of key goods, such as food and gas. Studies of presidential approval have found inflation often drives a decline in a president’s standing, so that’s probably a factor for Biden here, too.

It’s possible that some of these conditions will improve — the coronavirus pandemic has shown us time and again that its trajectory is often unpredictable. But any changes will likely take time, and in the short-term there isn’t a lot that’s positive on the horizon for Biden. Democrats’ legislative agenda is largely in limbo, with both their social spending plan and voting rights push looking like tall orders at this point. Of course, there’s no guarantee that passing either piece of legislation would boost Biden’s standing — after all, there was virtually no change in his approval rating following the signing of the bipartisan infrastructure package in November — but the fact that Democrats are in a legislative holding pattern has led to a lot of negative media attention.

How much of this is within Biden’s control isn’t straightforward. Some inflation may have been unavoidable as the economy got moving again following the pandemic-laden 2020. And many Americans refuse to get vaccinated, making it easier for a new variant to tear through a large portion of the population. But as president, the buck stops with Biden. The government arguably should have been better prepared for new waves of the coronavirus, with testing made more readily available for the public. And as leader of his party, the legislative program Democrats have pursued in fits and starts is partly on him, including all-but-impossible-to-pass Democratic-backed voting rights legislation. One year in, the public is unhappy with his performance and the state of the country, and that may only change if COVID-19 recedes and economic confidence rebounds.

According to FiveThirtyEight’s presidential approval tracker,

In our average of polls of the generic congressional ballot,