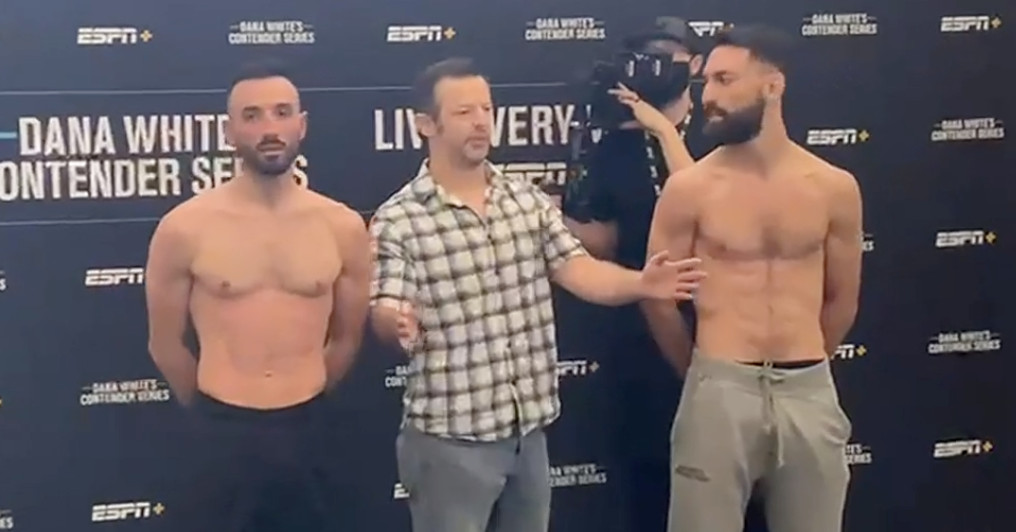 An ugly moment unfolded at the weigh-ins for Dana White’s Contender Series on Monday when bantamweight veteran Oron Kahlon called his opponent Javid Basharat a “terrorist” at the conclusion of their face off.

Originally from Afghanistan, Basharat was jawing with Kahlon as soon as the staredown began, but the back-and-forth turned very personal after the fighters faced forward for photos.

Just before the athletes separated with UFC matchmaker Sean Shelby standing between them, Kahlon, who originally hails from Israel, turned and used the slur against Basharat, who immediately pointed back at his opponent but did not escalate the situation.

Basharat wrote on Instagram that Kahlon missed weight by three pounds, leading to the verbal sparring during the faceoff.

“This p*ssy wanted a way out by missing weight by three pounds,” Basharat wrote. “I told him I’m gonna still whoop his arse, he then called me a terrorist. [He] wanted a reaction again he wanted a way out. Unlucky for him I ain’t going nowhere! I’m waiting to see him tomorrow.”

Basharat, who primarily trains out of England, previously has spoken about providing a positive story for his native Afghanistan by securing a UFC contract with a win on Tuesday night. He would be the second Afghan-born fighter on the current roster alongside lightweight Nasrat Haqparast.

“There are not many good things to say about Afghanistan on the news,” Basharat told The Sun. “You don’t hear about it. If I can be one of those people to bring a good light to it, it’s going to be great. We’ve already got one Afghan fighter in Nasrat Haqparast and he’s doing very well.”

MMA Fighting reached out to the UFC for comment on the altercation but has not received a response at the time of publication.