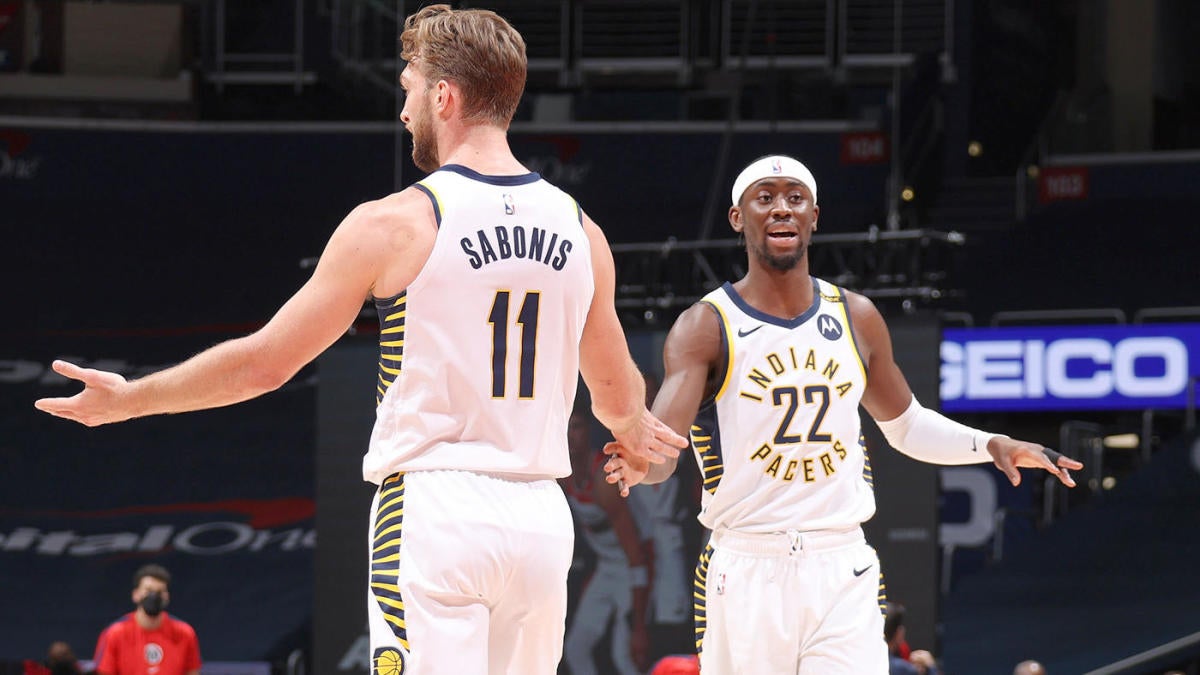 It’s the quietest part of the NBA calendar, but the Indiana Pacers couldn’t get through it unscathed. On Sep. 7, the team announced that forward T.J. Warren would remain out indefinitely with a stress fracture in his left foot, an injury that has already cost him virtually an entire season. Two days later, up-and-coming guard Edmund Sumner tore his left Achilles during a workout. The Pacers will not be whole for a while.

Related: In an appearance on ESPN’s “The Woj Pod” earlier this summer, guard Malcolm Brogdon said that, while he’s played for the Pacers since 2019, he’s still not sure how good they are.

“Over the past two years I haven’t gotten a sense of what the team can look like,” Brogdon said. “Because when Victor [Oladipo] was here, he was out. He was out for [all of 2019-20] and then came back last season just for a little bit before he was traded. And then Caris [LeVert] came towards the end of the season. Myles [Turner] was injured when Caris came back. I mean, we’ve had injuries to the big-minute guys on this team and it’s just happened at [inopportune] times, so I haven’t gotten a feel of what this team can become or be.”

Indiana’s inconveniently timed injuries predate Brogdon. In 2018-19, Bojan Bogdanovic was its No. 1 offensive option for three months, a result of Oladipo’s initial injury. Under former coach Nate McMillan, though, the Pacers had a well-defined identity regardless of who happened to be available. They might not have had a particularly creative offense, but they were disciplined, tough and never easy to play against.

Under Nate Bjorkgren last season, it was different. Indiana modernized its shot selection and mixed up its defensive coverages to some early success, but the honeymoon was incredibly brief. When the Pacers were shorthanded, they didn’t have the same foundation to fall back on. Despite Domantas Sabonis having a career year and Turner protecting the paint as well as just about anybody, they finished 34-38 and lost to the Washington Wizards in a play-in game. About a month later, Indiana hired Rick Carlisle to replace Bjorkgren.

Ideally, Carlisle and better health will push the Pacers back into the postseason. There is proven talent here, and maybe they’re due for some luck.

Pacers believer: It’s funny how little buzz there is about this team. I’m sure people are going to be “surprised” again when the Pacers win 45-50 games. Last season may have been a bit of a mess, but since it led to this franchise reuniting with an elite, championship-winning coach, it was worth it! I doubt anything their Eastern Conference competition did this summer will wind up being more meaningful than that.

Pacers skeptic: Worth it? Settle down. Maybe Indiana should have just kept McMillan, whose supposedly archaic approach seemed to work just fine with the young guys in Atlanta. The Carlisle hiring is a nice pivot, but what exactly is there to be excited about here? This might be the most aggressively pretty-good-I-guess roster I’ve ever seen. Going into the offseason I hoped the Pacers would do something to raise the ceiling, but instead they’re basically bringing back the same team, minus the one guy who had real gravity. (Miss you, McBuckets.) They even used the No. 13 pick on a 24-year-old role player. I can’t imagine a better metaphor for their offseason.

Pacers believer: Hey, leave Chris Duarte alone! Didn’t you see him at summer league? That guy can clearly play. I actually agree with you, though, that the pick was a good metaphor for the offseason — rather than going wild with a bunch of “high-upside” (i.e. risky) moves, the front office has made several small, shrewd decisions. Torrey Craig is a helpful complementary player, and the Pacers got him for two years, $10 million. T.J. McConnell, one of the better backup point guards in the league, re-signed on a team-friendly deal. I don’t know whether or not Isaiah Jackson will turn out to be worth all of the maneuvering it took to get him with the No. 22 pick, but I do know that they haven’t had a rim-running big like him for years and Aaron Holiday was expendable. Sure, they’ll miss McDermott, but the Spurs overpaid for him and Duarte can shoot it.

Pacers skeptic: To be clear, I have nothing against Duarte. He should be fine. I’m just tired of fine. Those 45-50 wins you mentioned? That’s the best-case scenario, especially after this news about Warren and Sumner. I can see Indiana being a top-10 defensive team if Turner stays healthy, but I’m not sure these pieces fit particularly well offensively. Am I really supposed to congratulate the Pacers for signing a guy the Bucks dumped a few months ago? Craig isn’t better than Bruce Brown or Blake Griffin, both of whom signed for less money in Brooklyn. I know there’s a new coach now, but it’s kind of nuts that Sabonis and Turner are still on the same team. This whole thing feels stale.

Pacers believer: How can this feel stale when we haven’t really even seen it yet? LeVert and Brogdon have played 21 games together, and Warren played four games last season. I can’t wait to see what Carlisle does with Sabonis, and I don’t see some glaring problem with the fit. All the core players are at least decent shooters, and it should be clear by now that every team needs multiple playmakers. (Come on, man!  A big-market superteam getting discounts has nothing to do with what we’re talking about here.)

Pacers skeptic: I guess it depends how you define “decent shooter.” We’ve seen teams go under when Brogdon, LeVert and McConnell run pick-and-roll. You can tell me that Indiana is going to make up for so-so spacing with ball movement and player movement, but it’s not like there are a bunch of awesome passers here besides Sabonis. Anyway, my broader point: Indiana is bringing back a team that was average on both ends of the court last season and has no chance against the best teams in the East, regardless of who’s coaching. Where is the depth? Jeremy Lamb is getting traded whenever he’s healthy. Are you going to try to sell me on Oshae Brissett and Keifer Sykes?

Pacers believer: So I can’t feel good about a team unless I think it’s going to make the Finals? Sure! Look, it’s not like the Pacers have traded away their future firsts or signed a bunch of past-their-prime stars. Sabonis (25), Turner (25), Brogdon (28), LeVert (27) and Warren (28) are all relatively young. There is nothing wrong with being less than a championship contender, and the fact that I even have to say this makes me worry that the all-in trades we’ve seen in recent years have completely warped the way we talk about team-building. Getting LeVert for Oladipo was a fantastic move! Splitting up Sabonis and Turner just for the sake of it would be a silly one! I love watching McConnell steal inbounds passes, and I love that the Pacers have two big guards who kind of worm their way into the paint. And fine: Brissett’s defensive versatility is going to earn him minutes, Sykes could totally be a good third guard.

Pacers skeptic: You can totally feel good about them. You should just be realistic. They’re a first-round out.

Pacers believer: I mean, I expect them to be better than people think, but I’m not going crazy … then again, I do see some parallels between this team and the 2019 Heat: The playmaking big, the high defensive ceiling, the renowned coach, the rookie wing picked No. 13 in the draft—

Pacers skeptic: Stop! Please. Just stick with what you were saying before — it’s totally fair to feel good about a team that is probably not going anywhere.

Duarte is the rare first-year player who projects as an immediate contributor, and I’m not just saying that because he’s 24 years old. He’s 6-foot-7, he’s lights out on catch-and-shoot 3s and he can pull up, finish at the rim and make defensive plays off the ball. Every team needs connectors like him.

He is a particularly good fit in Indiana, though, because this team can use all the floor spacers it can get. Since the Pacers have so many guys who need touches, Duarte might be strictly a spot-up guy at the beginning of the season. I’m curious, though, to see how else he gets buckets over the course of the year. At the very least, if he makes timely cuts, Sabonis will find him.