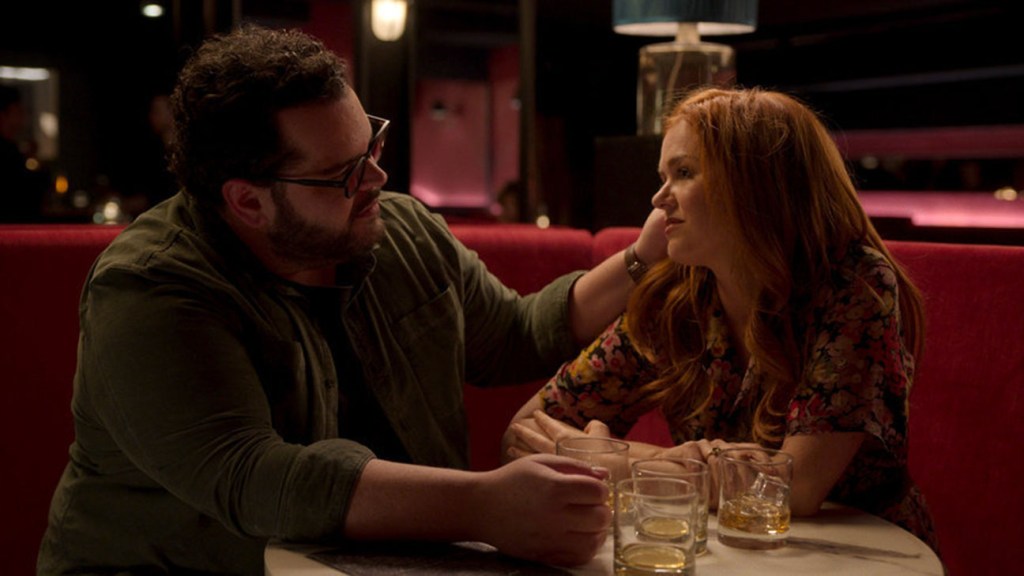 Long stretches of Peacock’s Wolf Like Me are basically a two-hander with characters played by Isla Fisher and Josh Gad tentatively embarking on a new romance while discussing the challenges of finding love in your 40s, opening yourself up and exposing your baggage, your damage, to another person. They’re long conversations on park benches or across dinner tables, framed by writer-director Abe Forsythe to accentuate the gulf between his heroes, the space that they and he are struggling to fill.

You might be perplexed to know that Wolf Like Me is a show about the strained relationships and the healing properties of love and openness — more like Scenes From a Marriage or State of the Union than the genre-defying, supernatural-adjacent series Peacock wants people to think it is. That’s the challenge of both writing about and watching Wolf Like Me; there’s the story Forsythe wants to tell and then there’s the subtext he’s using to lure people in. It’s a show of broad metaphors, perhaps one or two too many, that don’t always feel fully realized in the moment, but come together with pleasantly amusing potency after six episodes.

The series is set in Adelaide, Australia, where single dad Gary (Gad) is still reeling from the death of his wife years earlier and struggling with the possibility that his residual grief is warping his solemn tween daughter (Ariel Donoghue’s Emma). A dramatic car accident leads him to Mary (Fisher), an advice columnist in prolonged mourning herself. For personal and professional reasons, Mary understands what Gary and Emma are going through, but she has a horrifying secret she can’t bring herself to share. She may not, however, have a choice.

You will be able to guess Mary’s secret either from the show’s title, its trailers or the ominous build-up of the first episode, which I found easily the worst of this initial run. What’s interesting isn’t the secret, but what it represents — as well as the way Forsythe approaches it, which alternates between dark humor and treating it as the almost matter-of-fact embodiment of any personal imperfection that could and maybe should be a dealbreaker when looking for a significant other. The twist never becomes the primary genre that Wolf Like Me is operating in, so it’s better to be tickled by its inclusion instead of deeply invested. Or, put a different way, treat it as a bizarre wrinkle, but don’t grumble if the show about wounded souls doesn’t scare you.

At the same time, without always connecting the dots, Forsythe is dabbling in the cosmic. Mary and Gary are brought together by one bizarre meet-cute after another, and whether it’s Emma’s school project on the solar system or Mary’s fascination with Carl Sagan, Forsythe has almost a unified field theory linking the forces governing the universe and love.

So love here is irrational, love is hyper-rational and, yes, love is spiritual, as the series makes regular references — including a Groucho Marx quote and the Father John Misty cover of Leonard Cohen’s “Anthem” — to the Jewish mystical tradition of Shevirat ha-Kelim, the shattering of vessels to allow for both healing and the passage of light. Things in Wolf Like Me are constantly breaking or crashing into each other — frequently in uncomfortably visceral ways — as a conduit for intimacy.

So is it fate that’s bringing Mary and Gary together? Animal magnetism? Divine mandate? Or just the writerly contrivance of their rhyming names? The answer is meant to be an all-encompassing, “Yes.”

It’s a lot, and with episodes running under 30 minutes apiece, it’s hard for Forsythe to do more than a general “See where I’m going with this?” wink-and-nudge rather than choosing a lane. As much as anything, I guess he’s trying to capture the incomprehensibility of love; if he leaves all the jagged edges visible, it works as a commentary on how excessively tidy rom-coms so often are. There are other ways to illustrate messiness and, especially in some of the beats that aim for psychological realness, some viewers will feel that Forsythe rushes through things that the story needs to be entirely convincing.

The pieces are held together by the core trio of stars, who work hard to sell the disparate elements and tones. Fisher is especially strong, playing Mary’s deeply wounded psyche and the comic side of her dark secret with equal sincerity. Whether you want to find Wolf Like Me utterly serious or likably silly, it’s all there in her performance, which made me laugh and tear up in equal measure. Fisher has made choices that haven’t always put her in position to achieve mega-stardom, but this is a reminder of how versatile an actress she is. She’s so good that I very quickly stopped being confused by why, in a story set in Australia, she’s doing a transitory American accent.

Gad, who previously worked with Forsythe on the similarly genre-bending zombie film Little Monsters, deserves credit for underplaying his normal high energy without going to that mawkish well that some funny actors wallow in when they want to convey gravity. The extremes of the story could have given Gad an excuse to mirror the exaggerated circumstances, but he’s a believable Everyman caught in something extraordinary.

Matching them is the less experienced Donoghue, whose somber sweetness makes you root for Gary and Mary as a couple perhaps more than any chemistry between them. I’d put her alongside Matilda Lawler (Station Eleven), Christian Convery (Sweet Tooth) and Giulia Dragotto (Anna) in the ranks of young actors successfully grounding tricky small-screen material in recent months.

The Wolf Like Me finale, shot to great effect in the Australian outback, pulls off the tough trick of being unresolved in a satisfying way — either to end the story or give Forsythe future opportunities to explore, but possibly over-explain, the far-reaching themes. I ended up enjoying the show’s balancing act enough that I don’t know which way I’d prefer it to go.

Jamie Lynn Spears Speaks on Her Role in Britney’s Conservatorship
How Future plc is strengthening its new American acquisitions with U.K.-honed media strategies