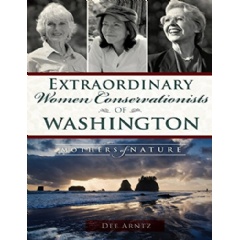 Author Dee Arntz’s new book about empowering and thanking women for their vast influence in Washington’s environmental conservation successes is why Pearson Media Group eyes elevate the work into a bigger motion picture.

Pearson Media Group’s excellent good reviews in the field of digital media and marketing are truly remarkable. The team exerts extra effort to provide its audience informative and comprehensive content in motion pictures and digital mass media. In these coming months, PMG will again create a notable collaboration with new author Dee Arntz to be an inspirational widescreen theme from her newly published writing “Extraordinary Women Conservationists of Washington: Mothers of Nature.”

“Extraordinary Women Conservationists of Washington: Mothers of Nature” is a compilation of inspirational stories of different courageous women who, in one way or another, have contributed to the conservation of mother nature in Washington D.C. through their practices.

Women were instrumental in the establishment of the Washington Environmental Council and the Washington Conservation Voters. The state legislator Jolene Unsoeld spearheaded the campaign against Boeing and other major corporations to enact the state Model Toxics Control Act, a victory for the environment. Many of Washington’s environmental conservation triumphs can be attributed to the efforts of courageous women. Some of them are icons Bonnie Phillips, Melanie Rowland, and Helen Engle, who fought against the destructive of timber cutting. Polly Dyer and Emily Haig helped expand Olympic National Park, and coordinated efforts with establish North Cascades National Park.

Dee Arntz, the author and conservationist from Washington, tells these and other vital stories, demonstrating that the legacy of the state’s female conservationists is nothing short of astounding. Pearson Media Group hopes that these stories will serve as a great honor for every woman in the world that takes the initiative to help care for the Earth’s wellbeing.

Deirdre Arntz has a certificate in wetland science from the University of Washington, a master’s in anthropology from San Francisco State, and a B.A. in political science from Boston College. She is a writer and a member of the Audubon Society, a former board member of Seattle Audubon, and former chair of that group’s nationally recognized Washington Wetlands Network. She has also served as a board member of the Washington Environmental Council.