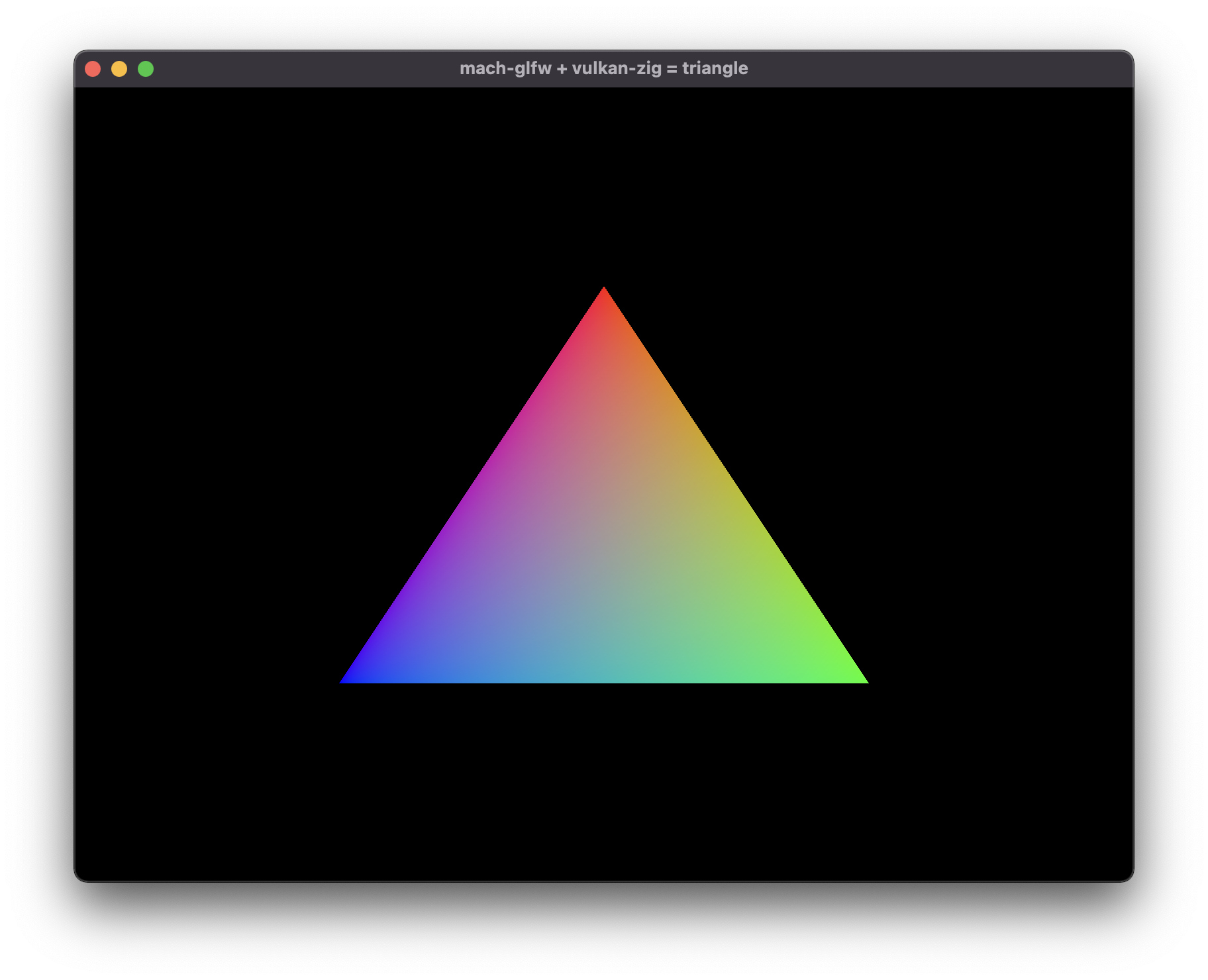 Building Mach for everyone

If Mach engine only benefits people interested in using that engine, and not the broader Zig (and even gamedev) community I would consider that a total failure.

Whether you’re interested in using all of Mach, just some of it with your own engine / project, or just the tools/ideas we develop in the future (with Unity, Unreal, etc.), I truly aim to produce something that benefits you.

Mach is in super early stages, I’ve spent the last four months perfecting a Zig interface to GLFW, and making no-fuss installation and cross-compilation a reality. Today, you can benefit from that work too.

Building GLFW for every platform

Just zig and git, that’s the idea. The GLFW C code is compiled with zig, and the build.zig file automatically uses git to clone (a very minimal set of) system dependencies for you (X11 libraries, etc.)

No installing apt packages. No dealing with missing header errors. It should just work out-of-the-box, and for every platform:

Today, this works for GLFW itself. Cross-compilation of OpenGL and Vulkan apps is not yet fully functional. We’re working on it, though.

Aside from platform support, mach-glfw now has:

You might be asking: why Zig bindings, when Zig can interface directly with C? Ziggified bindings to GLFW get us:

GLFW traditionally passes errors to the user via a callback. This can make errors easy to ignore, as well as difficult to correlate and handle effectively at the time of the function invocation.

We translated a a Vulkan example to mach-glfw, which you can try for yourself today:

After porting it, we found that the example was crashing with a NoWindowContext error. Strange?

As it turns out, we had found a small bug in the vulkan-zig example code, it was calling glfwSwapBuffers which is not needed for Vulkan. The error went unnoticed because it’s easy to miss errors with GLFW’s error callback handling style. But with mach-glfw, it was an explicit error you have to handle e.g. via try glfw.swapBuffers() – we literally couldn’t miss it.

One particularly frustrating issue was tracking down why the last part of the GLFW API we needed to wrap for 100% coverage, the glfwSetWindowIcon function, was crashing:

That’s odd? Illegal instruction at address 0x2cee09 – are we corrupting the stack somehow? Is this a Zig compiler bug?

Running in lldb didn’t help with shining any light on the problem, either:

After poking around at the stack, checking all pointers and lengths were valid, etc. I was at a loss. The mach-glfw code sure seemed valid, and yet, this crash. I managed to track the crash down to the first iteration of a loop in GLFW’s x11_window.c:

At this point, I feel confident in saying:

Luckily, my brother (and reverse engineer) @Andoryuuta was available to help debug, so I pulled him in. Stepping through instructions, we could see clearly that after a bit shift we were stepping into the abyss:

Inspecting the binary in IDA Pro we were able to see that we were jumping into an __asm { ud1 } section (ud1 standing for “undefined instruction 1”):

It turns out that clang’s UBSan inserts these instructions as traps for when the compiler thinks there is undefined behavior occurring, such as if a pointer addition leads to an overflow. This is super interesting, but unfortunately doesn’t always give a compiler error. We got lucky and found someone else who ran into this through Google:

I believe LLVM explicitly generates a ud2 x86 instruction because “it determined” there’s undefined behavior in the C code. So first I wonder which flags you’re passing it through zig (i.e. how strict are you being with the settings?)

And indeed, compiling via zig build test -Drelease-fast (which turns off UBsan) made the crash go away. So where’s the undefined behavior?

If we squint at the code and assume all pointers, counts, and indices are correct, you might be able to spot it:

What is happening here is that:

Suddenly, it all makes sense. And if we load an equal snippet of code into Godbolt we can see what is happening when we compile without UBSan / the -fsanitize=undefined flag: 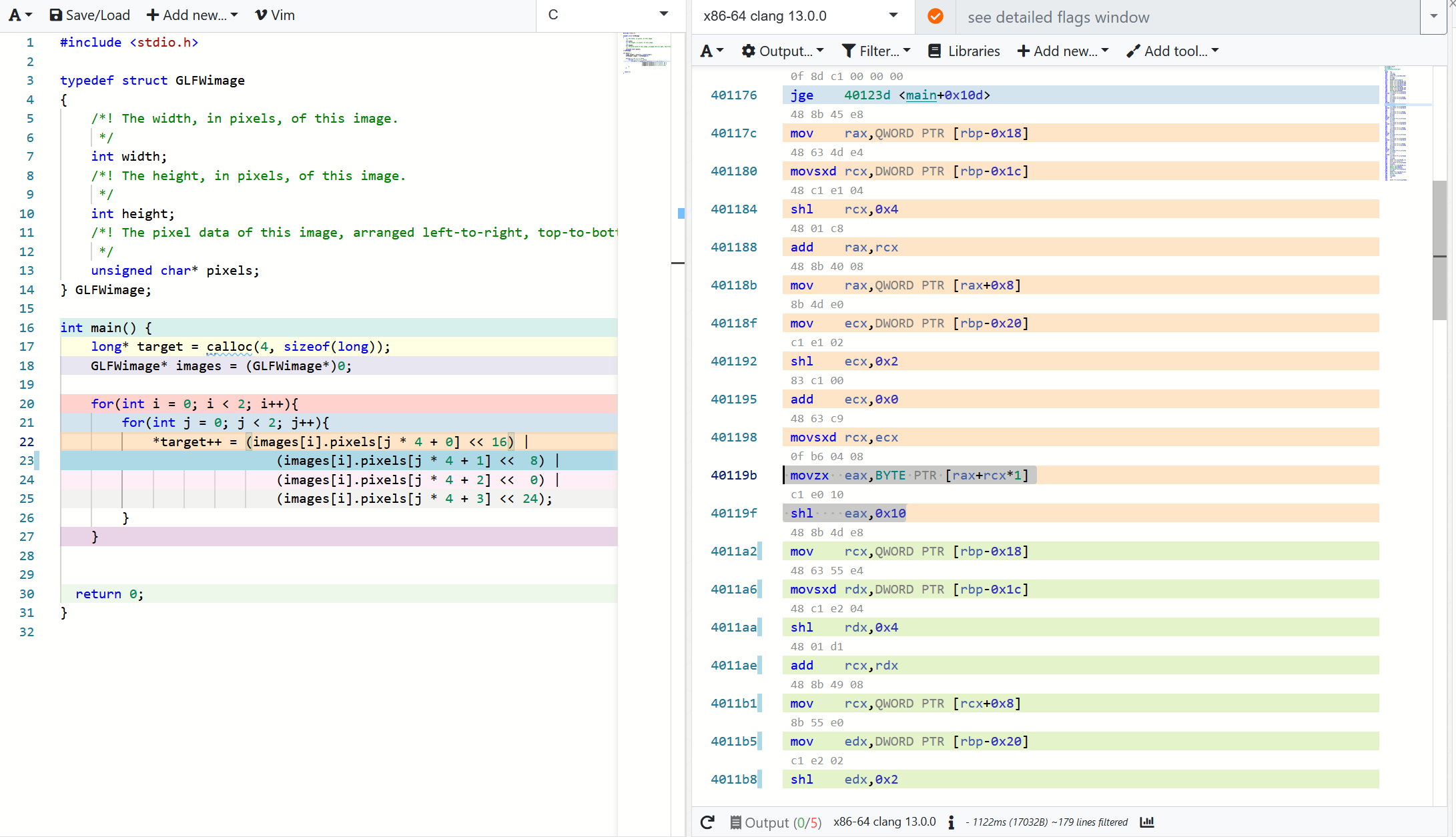 Without UBsan, clang merely uses the 32-bit EAX register as an optimization. It loads the 8-bit number into the 32-bit register, and then performs the left shift. Although the shift exceeds 8 bits, it does not get truncated to zero – instead it is effectively as if the number was converted to a long (32 bits) prior to the left-shift operation.

This explains why nobody has caught this UB in GLFW yet, too: it works by accident! Just because the compiler likes to use 32-bit registers in this context.

And this change benefits all the languages out there using GLFW: glfw/glfw#1986

This code, and undefined behavior, has been in GLFW for over 6 years according to git blame.

Anybody using GLFW could have enabled UBSan in their C compiler. Anybody could have run into this same crash and debugged it in the last 6 years. But they didn’t.

In mach-glfw, we compile all of GLFW’s C code with Zig (which is also a fully functional C and C++ compiler), with UBSan enabled by default.

All key Mach engine developments will be posted here, with incremental updates on Twitter @machengine.

Follow Mach engine on GitHub, and if you like what I’m doing please consider sponsoring my work.