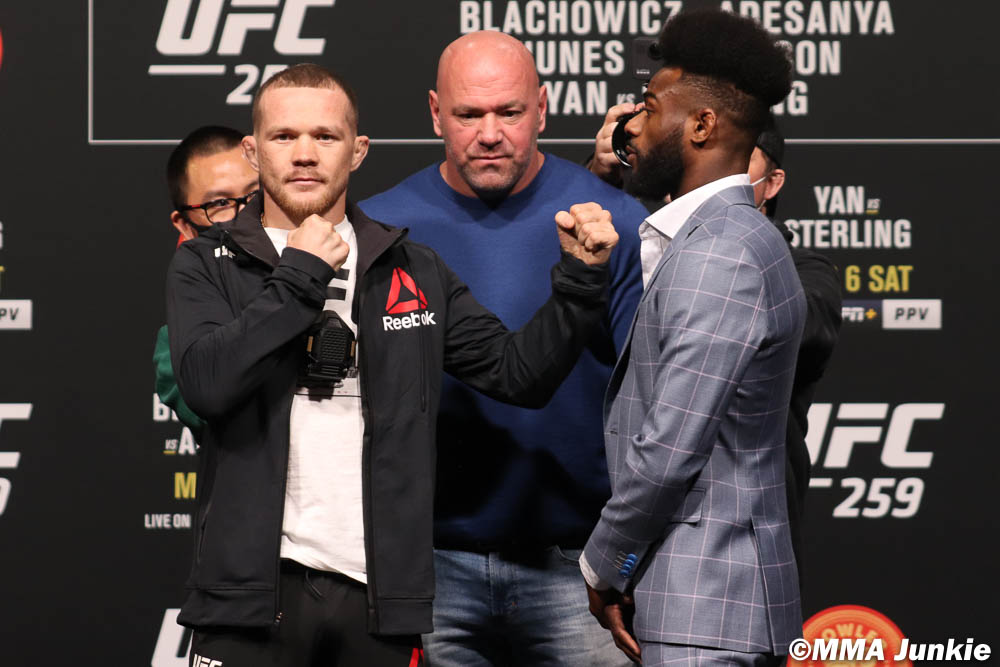 The feud between the two men holding pieces of the UFC bantamweight title continues to rage on.

On Tuesday, the new date of the highly-anticipated rematch between champion Aljamain Sterling and interim champion Petr Yan was confirmed to be set for UFC 273 in April, a change from a previously settled date at UFC 272 in March.

Sterling (20-3 MMA, 12-3 UFC) recently stated the delay was due to Yan’s personal reasons and not being vaccinated for COVID-19. However, Yan (16-2 MMA, 8-1 UFC) claimed that is not true as he is vaccinated and ready to fight now, while citing a completely different reason for the change in date, which prompted a back-and-forth exchange on social media Tuesday evening.

Check out their messages via Twitter about the situation below.

Pathetic liar desperately trying to look good and control the narrative but it won’t work. I’m vaccinated and ready to bash you anywhere even tomorrow. UFC simply doesn’t want fake champion to headline the event. https://t.co/aPG3WECd5m

Lmao I’m only repeating what I was told from the bosses 🤷🏾‍♂️. Don’t get your potato tits in a twist! I’d happily fuc k you up tmw too. That can easily be arranged. Мышь https://t.co/lI4IuU2pYA

In all seriousness…Why would I do that? I got a call. The fights being pushed and the reasoning was because of Yan. Whether or not it’s true, idgaf 🤷🏾‍♂️

I’m just annoyed the fight is now 12 weeks instead of 8. Im gonna silence the “boogie man” for good https://t.co/GwsNKk0eVt

Actually we were told that the fight was moved to April 9 so they could have a backup ready when you pull out again bitch https://t.co/EOwH9agRm2

The fact that you’re delusional enough to think another fighter is “bitching out” against you tickles my balls more than it will when I drop them on your face April 9th.

Every last word you say will be hilarious to say to you as I piss pound your face from full mount. #Receipts https://t.co/3i9cYfweTV

.Now stop sucking me and wait the extra weeks you needed like the good lil thot you are @PetrYanUFC 🐀