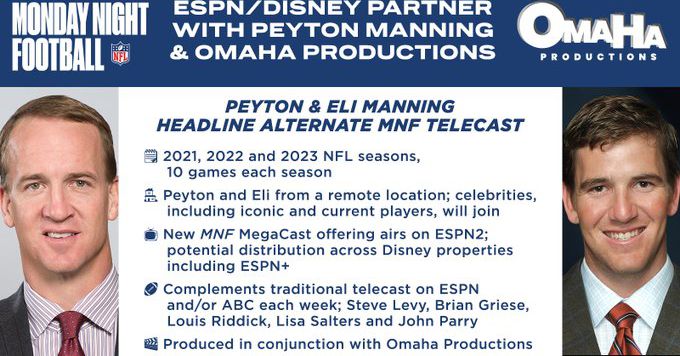 We are living in the era of alternate commentary, where a single game can be shown with numerous announce teams. It’s a fun way to make everyone experience their very specific sports taste, but I’m not sure anyone wanted this.

There has never been a wider potential variance in sports television. This is either going to be absolutely incredible, becoming the go-to way to watch Monday Night Football, showcasing two bright football minds giving insight nobody else can — or it’s going to be an absolute disaster.

The alternate broadcast is being handled by Omaha Productions, the company Peyton and Eli set up earlier this year to handle their joint foray into media. This is their newest venture.

Why this could be great

Both Peyton and Eli are, believe it or not, naturally charismatic. The brothers have each hosted Saturday Night Live in the past, showing a proficiency for hosting, timing and entertaining. Especially Peyton, who gave us one of the greatest sketches of all time.

If the Mannings can weave their comedy chops with their knowledge of the game, we really could have something special here. I’d like it to just be the two of them riffing on the game, as well as each other, with the potential they make this into a staple long enough for Arch Manning to enter the NFL. The 15-year-old phenom is destined for greatness, and it would be so much fun to have a scenario where two elder Mannings are calling a game with their nephew in it.

Why this could be bad

Contrary to popular belief, broadcasting is difficult. Not every ex-player is immediately able to walk into the booth and tear it up like Tony Romo. I don’t want to get judgey, but Eli is the weak link in this broadcasting chain — only because Peyton has had more time to hone his craft in retirement. If the duo sticks too much to the game on the field and gets self conscious in their ability to riff off each other, then this could devolve into two boring dudes just talking about the game, which is pretty much everything that’s wrong with Monday Night Football as constructed.

Still, I have some high hopes. At the very least it’ll be a different and (hopefully) fun way to watch the game. Variety is the spice of life, and maybe some Manning-fueled fun was all Monday Night Football needed.