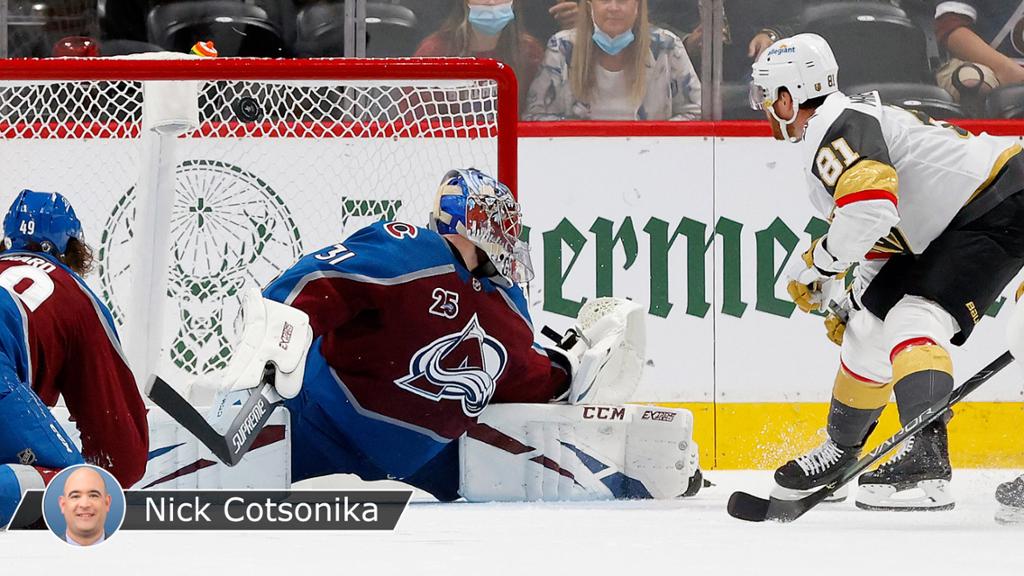 Three turnovers. That’s all it took.

That’s why the Colorado Avalanche lost 3-2 in overtime in Game 5 of the Stanley Cup Second Round in Denver on Tuesday, even though they outplayed the Vegas Golden Knights and entered the third period leading 2-0.

Then again, that’s why they still have hope.

Three turnovers. That’s all it was.

“I loved the way we played tonight,” Colorado coach Jared Bednar said. “I loved it. I thought we were the aggressors. We were on our toes. We were playing to win the hockey game. We played to our identity. Even the third period, I had no problems with it, except for the turnovers.”

There is no sugarcoating that the Avalanche blew it. They were in control entering the third, not only leading 2-0 but outshooting the Golden Knights 21-14.

Then Andre Burakovsky tried to pass the puck from left to right in the Colorado zone. Mattias Janmark knocked it down, Nicolas Roy passed it to the slot and Alex Tuch cut the Avalanche lead to 2-1 at 1:03.

“He has an out up the boards,” Bednar said of Burakovsky. “Even the cross-ice play that he’s trying to make, he has it if he just throws it over there in the air. I don’t think that had to have been a tape-to-tape pass in order to hit those guys. And we don’t get it out of the zone.”

Then Gabriel Landeskog tried to pass the puck from right to left in the Vegas zone. He intended the pass for Ryan Graves on the far side, but J.T. Compher reached back in the middle, thinking the puck was for him. He touched the puck, leaving it loose. The Golden Knights took off on an odd-man rush, and Jonathan Marchessault scored at 4:07. Just like that, it was 2-2.

Finally, in overtime, Graves had two shots blocked in the Vegas zone instead of finding a shooting line. After the second, Max Pacioretty collected the loose puck and passed it ahead to Mark Stone, who chugged ahead of Graves and Nathan MacKinnon and made no, well, mistake.

“They make you pay,” Bednar said. “That’s what Vegas does. I said at the start of the series that they don’t need a lot of chances to make you pay.”

This was uncharacteristic of Colorado, though.

After they were outplayed for eight periods prior to Game 5, Bednar shuffled his forward lines and took advantage of the last line change at home to get more favorable matchups. The Avalanche had more space. That led to more speed and skill. That led to more confidence with the puck. That snowballed.

“We were forechecking hard,” Landeskog said. “We were skating, coming up with pucks in the neutral zone and turning it quick on them and didn’t really let them get set up in our zone. We were first to contact and quick to stop their cycle game, and we were able to turn it and go the other way. So lots of positives to take out of tonight.”

Forward Logan O’Connor, who played for the first time in the playoffs this season, put it best.

“We sort of smothered them like they had been doing to us the last two games, eight periods, type thing,” he said. “We were using our speed, attacking the puck, forechecking hard, using tight support all over the ice. The [defensemen] were jumping up in the play.

“I think we’ve got to continue to do that. We don’t need to change much going into next game. Obviously sharpen up a couple things, and I think we’ll have success.”

The Avalanche still need more from their top players. MacKinnon, Landeskog and Cale Makar did not score a point in Game 5. Mikko Rantanen had one assist.

But they came close to winning in overtime when Vegas goalie Marc-Andre Fleury made a huge save on Compher, and Bednar’s message to the players was simple afterward.

“Go do it again and eliminate a couple of those plays,” Bednar said. “I told them that that’s exactly how you have to play in order to win against Vegas, and you’ve got to do it again. …

“There’s no reason if we play the right way and we clean up a couple of those decisions we can’t get the job done in Vegas.”