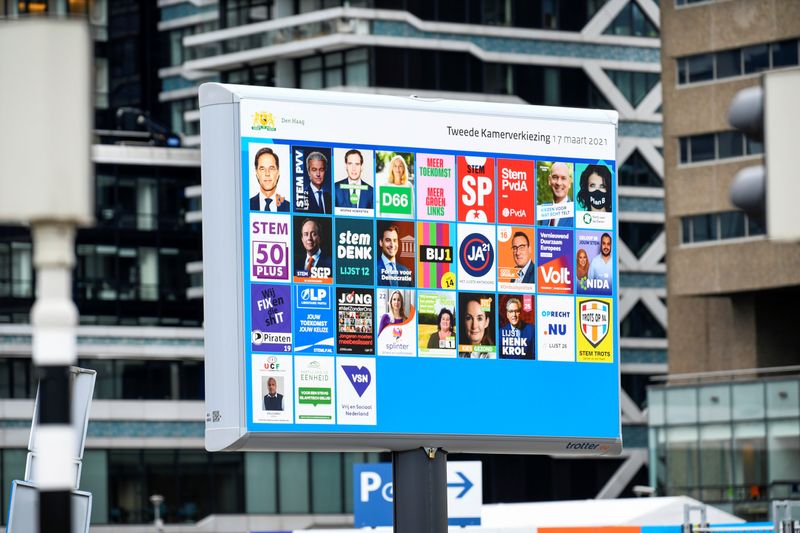 © Reuters. An election sign is seen in The Hague

AMSTERDAM (Reuters) – Dutch voters look set to give Prime Minister Mark Rutte’s conservative VVD Party a fresh four-year mandate in a national election on March 15-17 that is widely seen as a referendum on its handling of the coronavirus pandemic.

With a ban on gatherings of more than two people, restaurants and bars shut and the first night-time curfew in place since World War Two, voting has been spread over three days to help ensure social distancing at polling stations.

A majority of voters reluctantly support the lockdown, given the Netherlands’ current infection rate of 31 per 100,000 people, towards the high end of Europe’s range.

Rutte is running as “a safe pair of hands and I think that resonates with a large group of voters”, said Rem Korteweg of the Clingendael Institute, a think-tank based in The Hague.

Rutte, 54, has been Dutch prime minister since 2010, making him one of Europe’s longest serving leaders.

While the government’s coronavirus response has included blunders such as flip-flopping over face masks and a slow vaccine rollout, voters credit Rutte with ensuring enough hospital beds were available through two COVID-19 waves.

Government support for companies has kept unemployment at just 4%, dulling the economic pain of the prolonged lockdown.

NO TIME FOR ‘EXPERIMENTS’

“I believe that in a crisis… people look at the current leader, and they are not too much into experiments,” said Wilders.

In the first Dutch election in two decades where immigration has not been the pivotal issue, Wilders has campaigned for more spending on healthcare and small businesses, and against the curfew, which caused rioting when it was introduced.

Among other major parties, Labour, the Green-Left and the pro-education D-66 parties are vying with the centre-right Christian Democrats for third place. Two or three of these will likely join a new VVD-led coalition.

Some voters remain undecided after a year of struggles.

“I don’t feel supported by the party now at the helm and I just don’t know who I will vote for,” said cafe owner Jaap de Vriend in Leiden, who said he had usually supported the VVD.

“In the last year… I sold everything I could just to save my business,” said De Vriend, who converted his cafe into a takeaway deli to stay afloat during the lockdown.

The National Institute for Health (RIVM) has advised against any swift relaxation of the lockdown measures, saying that hospitals could still be overwhelmed in a third wave of the pandemic driven by more contagious variants of the virus.

Although Rutte’s government was among the last in Europe to begin vaccinations, they are expected to have reached 10% of the population by the end of March. On government forecasts everyone who wants a shot will have had one by July.

“We have light at the end of the tunnel… but it may still really take a while before we get there,” Rutte said at his last pre-election news conference.