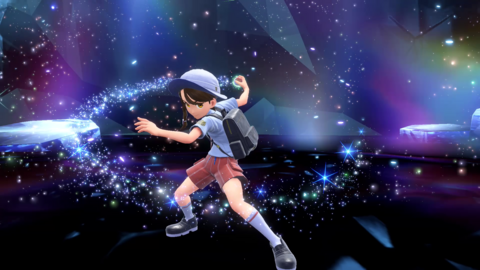 Pokemon Scarlet and Violet’s first week of release has been plagued with bugs, glitches, and performance issues–some frustrating, some fun, and others proving useful to creative players. Two new exploits have been discovered that maximize a player’s chance of encountering shiny Pokemon–one that allows you to duplicate a shiny spawn, another that increases the chances of a shiny spawning.

The first, as picked up by Video Games Chronicle, was discovered by YouTuber Austin John Plays, and allows players to capture the same shiny Pokemon multiple times when performed correctly. To work, it has to be in an area near an open town, or another area that doesn’t require a loading screen to enter.

If players find and catch a shiny, or another Pokemon they want to duplicate, in an area matching this description, they can then walk towards the town, and at the point where the town’s name comes up on screen, save and restart the game. When they load back in, the Pokemon they caught will still be in storage, but the wild version of it will have loaded back in the area where it was first encountered, able to be caught again.

This exploit can be viewed in action in Austin John’s video above, though unfortunately it does require finding a shiny Pokemon spawned in a very specific location. If another group of Pokemon spawn between the shiny and the town, this method won’t work. It’s also likely to be patched at some point, so try it now while you still can.

The other exploit unearthed this week was found by YouTuber PhillyBeatzU, as picked up by Kotaku, and essentially involves spawning in a huge number of Pokemon to increase the chances of finding a shiny one.

Named the “Shiny Picnic Reset Method” by PhillyBeatzU, the exploit makes use of Pokemon Violet and Scarlet’s picnic table. To use this method, players have to travel to a Pokemon outbreak, which will be marked on the map with a blinking red icon.

PhillyBeatzU says to make sure to have a Pokemon that knows False Swipe first, to make sure you can easily catch any shinies encountered. Then, go to an outbreak and start battling the Pokemon there. After 60 Pokemon are defeated, your shiny rate will increase to 1 out of 1365, PhillyBeatzU claims.

Pulling out the picnic table will cause outbreak Pokemon to despawn, only to respawn again when it’s packed away. PhillyBeatzU uses this quirk to repeatedly reset the outbreak, making use of the higher shiny rate to increase the chance that a shiny Pokemon will spawn. In the demo video, he encounters a shiny Drifblim after 15 resets.

Again, it’s possible that this exploit will be patched out if it makes it too simple to farm shiny Pokemon, but for now it’s time for a Shiny Picnic.

The products discussed here were independently chosen by our editors.
GameSpot may get a share of the revenue if you buy anything featured on our site.

Deus Ex Go, Other Square Enix Mobile Games Will Be Unplayable From Next Year
Solgaleo And Lunala Come To Pokemon Go This Week