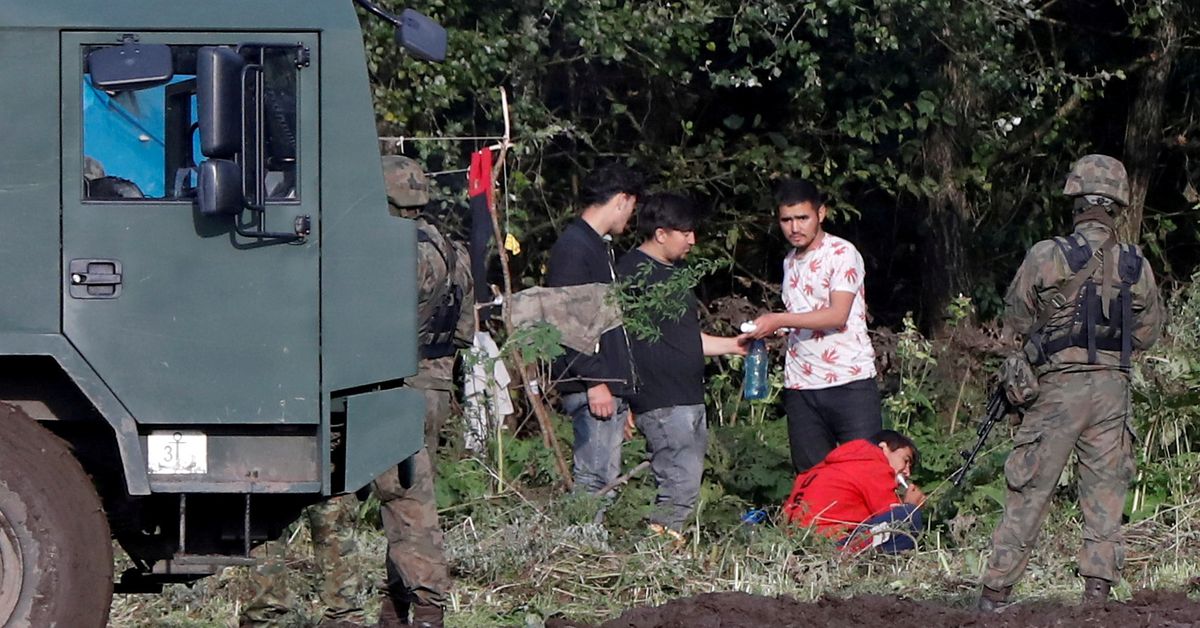 Polish border guards stand next to a group of migrants stranded on the frontier between Belarus and Poland near the village of Usnarz Gorny, Poland September 1, 2021. REUTERS/Kacper Pempel

WARSAW, Oct 14 (Reuters) – Poland’s foreign ministry summoned the Belarusian charge d’affaires on Thursday after Polish police found the body of a migrant near the border with Belarus.

It was the second time in a week that Aleksandr Czasnouski had been called in to answer questions about the situation at the frontier, where Poland has imposed a state of emergency following a surge in migrants from countries such as Afghanistan and Iraq trying to enter the European Union country via Belarus.

“Police found this morning another body of a person who was trying to cross the border,” foreign ministry spokesperson Lukasz Jasina said by telephone.

The second issue discussed was a humanitarian convoy which Poland wants to be allowed into Belarus, he said.

The Belarusian embassy in Warsaw did not immediately respond to an emailed request for comment.

It was the sixth body found by Polish authorities near the border since the surge of migrants.

Czasnouski was also summoned to the ministry last week after border guards said Polish soldiers patrolling the frontier were shot at from the Belarusian side. read more

The European Commission, and Warsaw say the flow of migrants has been orchestrated by Belarus as a form of hybrid warfare designed to put pressure on the EU over sanctions it imposed on Minsk. Belarus has denied this.

Human rights advocates have accused the Polish government of treating migrants inhumanely and not letting them apply for international protection. The government says the migrants are Belarus’s responsibility as they are legally on its territory, and that offers of humanitarian aid have been refused.

In Brussels, the EU executive summoned envoys from Poland, Lithuania and Latvia on Thursday over the fate of migrants stuck on their borders with Belarus. read more

Polish Lawmakers are due to vote on the construction of a wall equipped with motion sensors and cameras at a cost of over 1.6 billion zlotys ($407 million). Poland began building a barbed wire fence in August.