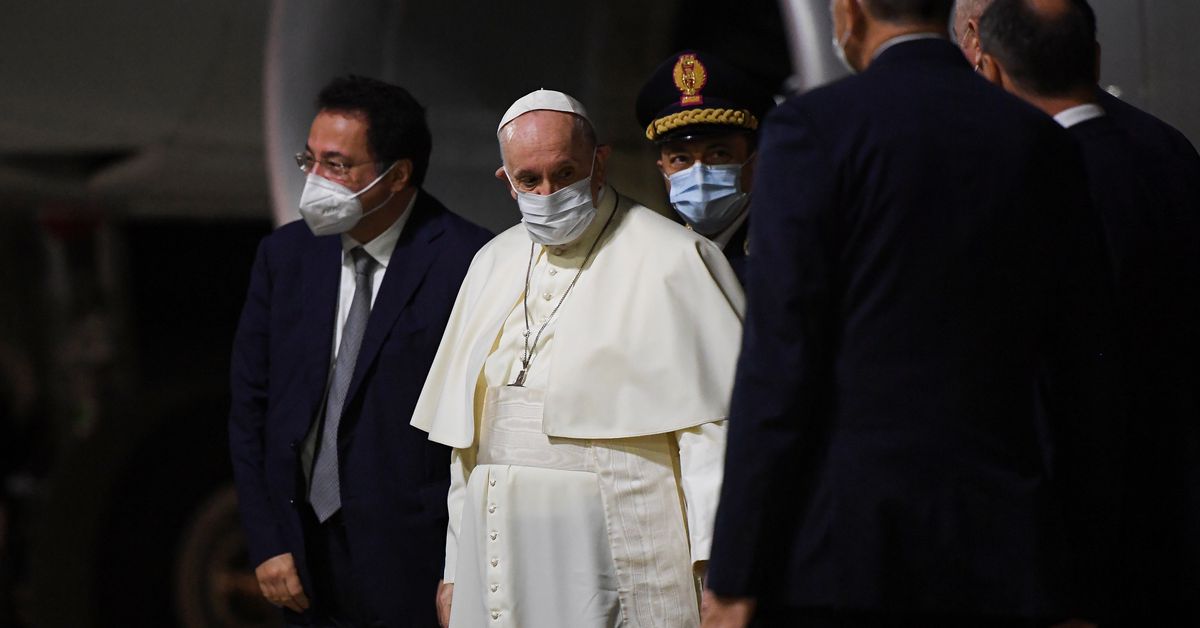 Pope Francis arrives to board the plane for his visit to Hungary and Slovakia, at Fiumicino Airport near Rome, Italy, September 12, 2021. REUTERS/Alberto Lingria

Francis, 84, will spend only seven hours in the capital Budapest to close an international Roman Catholic meeting before moving on to Slovakia, where he will stay much longer, visiting four cities before leaving on Wednesday.

“We are resuming trips, and this is very important because we can bring our words and greetings to people,” Francis told reporters on board the flight en route to Budapest in a reference to COVID-19.

Asked about his recent surgery, the Pope said he was feeling fine.

After landing, pilots flew the red-white-green national flag of Hungary and the flag of the Vatican from the windows of the cockpit of the Alitalia jet as it taxied down the sunbathed runway.

The smiling Pope briefly waved to children lining up to greet him before getting into a car taking him to central Budapest.

The Vatican’s schedule says Francis is due to meet Orban and President Janos Ader as well as bishops and representatives of some Jewish communities before saying Mass to conclude a Church congress that began last Sunday.

The extreme brevity of his stay in Budapest has prompted diplomats and Catholic media to suggest that the pope, making his first trip since surgery in July, is giving priority to Slovakia, in effect snubbing Hungary.

Francis has often denounced what he sees as a resurgence of nationalist and populist movements, called for European unity, and criticised countries that try to solve the migration crisis with unilateral or isolationist actions.