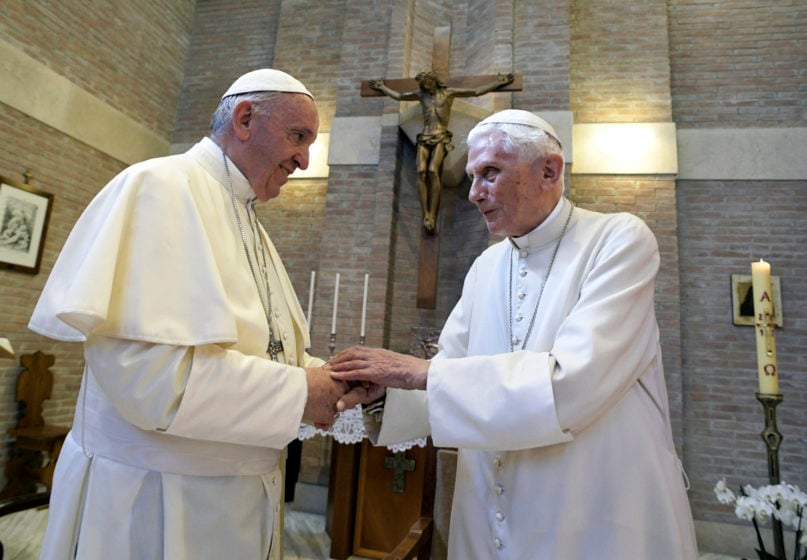 A statement sent to Vatican journalists on Wednesday confirmed that “in the second half of October the Directorate of Health and Hygiene of Vatican City began to administer the third dose of the vaccine against Covid-19, giving priority to people over 60 and vulnerable people.”

Pope Francis, 84, and Benedict XVI, 94, are well beyond the age of 60 and both have preexisting health issues. Pope Francis had part of his lung tissue removed as a result of an infection he suffered in his youth and in mid-July, he was hospitalized for a scheduled colon surgery that kept him in the recovery ward for 11 days.

Pope Francis and Benedict XVI received the first dose of the Covid-19 vaccine in January as the Vatican launched a campaign to promote vaccination among Catholic faithful inside and outside the Vatican City walls. Homeless people and those living in conditions of poverty and marginalization were welcomed into the Catholic state to get vaccinated in an effort to combat the epidemic.

The Vatican has been actively involved in the efforts at the World Trade Organization and World Health Organization to waive vaccine patents in order to allow research facilities around the globe to manufacture their own vaccines. Members of Catholic organizations have also reached out to the Biden administration to promote the waiver of vaccine patents.

In August, Pope Francis joined bishops in North and South America to encourage faithful and nonfaithful alike to receive the vaccine, calling it “an act of love.” The message was delivered as part of a media campaign by the Ad Council to combat vaccine hesitancy.

“Thanks to God’s grace and to the work of many, we now have vaccines to protect us from Covid-19,” Pope Francis said in the message, adding vaccines must be made available for all through the collaboration of peoples and states.

During Pope Francis’ press conference aboard the papal plane returning from his apostolic visit to Slovakia in mid-September, Pope Francis seemed puzzled by the wave of skepticism surrounding vaccinations, which he noted have helped humanity overcome measles and polio.

He also mentioned that some cardinals and a small group inside Vatican City remain unvaccinated and the Vatican was “studying ways to help” such people who are still hesitant. Soon after, on Sep. 21, the Vatican issued a “green pass” mandate for people wishing to enter the Catholic city-state, using the Italian system requiring either proof of vaccination, a recent negative Covid-19 test result or documentation proving recovery from the disease.

Three members of the Swiss guard, the colorfully clad corps who swear fealty to the popes, resigned in early October rather than be vaccinated against Covid-19.

RELATED: Why it’s hard to find a good Catholic in American politics