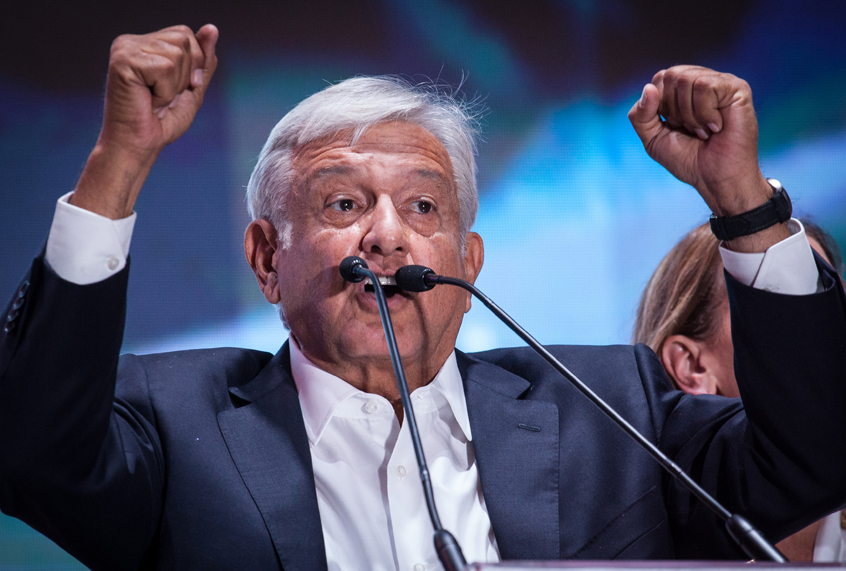 The former mayor of Mexico City easily outpaced his two main rivals, securing more than 53 percent of the vote to 24 percent for conservative candidate Richard Anaya and 15 percent for Jose Antonio Meade of the ruling Institutional Revolutionary (PRI) party.

The anti-establishment president-elect, who is often referred to simply by his initials (AMLO), pledges to transform Mexico by ousting the “mafia of power” – or long history of corruption that has paralyzed Mexico for decades.

“Corruption is not a cultural phenomenon, but it is the result of a political regime in decay. We are absolutely certain that this evil is the principal cause of social inequality and of economic inequality,” López Obrador said during his victory speech, according to CNN. “Because of corruption, violence has erupted in our country.”

But his advocacy for the poor and vow to defend Mexicans against Trump, coupled with his nationalistic rhetoric, also played a major role in his appeal to Mexican voters. Mexico “will never be the piñata of any foreign government,” López Obrador declared to supporters on the campaign trail.

His hardline against Trump stands in sharp contrast to the approach of Peña Nieto, who took a less assertive approach as the White House called for the Latin American nation to pay for a wall to be built along the U.S. border.

“Many feel that Peña Nieto has been like Trump’s doormat,” Ana Quintana, senior analyst on Latin America and the Western Hemisphere at the Heritage Foundation, told Politico.

López Obrador even published a book called “Oye, Trump” (“Listen Up, Trump”) that aims squarely at the U.S. president’s “attempts to persecute migrant workers.” Despite this, Reuters notes, “López Obrador’s nationalism, stubborn nature and put-downs of rivals have drawn comparisons” to Trump.

Trump, who has had a contentious relationship with Peña Nieto, offered kind words to López Obrador after his victory.

“Congratulations to Andres Manuel Lopez Obrador on becoming the next President of Mexico. I look very much forward to working with him,” Trump tweeted. “There is much to be done that will benefit both the United States and Mexico!”

Although Trump congratulated López Obrador in a Twitter message on Sunday night, a White House aide reiterated the U.S. leader’s pledge to fulfill one of his most controversial campaign promises by building a wall along the southern border with Mexico.

“In the case of Mexico, obviously we share a border with them (and) this president has made very clear about building that wall and having Mexico pay for it,” Kellyanne Conway said on Fox News.

The election of López Obrador could further strain U.S-Mexico relations, as López Obrador says illegal immigration to the U.S. should be addressed with economic development programs rather than a border wall.

“Mexicans will be able . . . to work and be happy where they were born,” he said.

When asked about Trump’s plan to build a border wall, López Obrador told the New Yorker, “If he goes ahead with it, we will go to the U.N. to denounce it as a human-rights violation.”

Mark Feierstein, former senior director for western hemisphere affairs at the National Security Council, suggested López Obrador would take a combative stance against Trump, telling Politico, “AMLO won’t hold back the way Peña Nieto has. Peña Nieto has been very passive toward Trump and toward the United States.”

Although he has made it clear that he’s ready to fight Trump, López Obrador said he wants to work with the U.S. on certain issues, in particular reaching a deal on NAFTA.

In an interview Monday with the Televisa news network, López Obrador said that Trump’s Sunday night tweet “was very respectful. That is what we always want to maintain with the U.S. government – that there be mutual respect.”

The change in administrations could ignite a new era of cooperation, Marcos Fastlicht, one of López Obrador’s top advisers, told Politico.

“A door opens for opportunity with Andrés Manuel,” said Fastlicht, a Mexican businessman who, according to the news outlet, has been friends with López Obrador for about 20 years. “He’s willing to speak with [Trump], willing to sit and negotiate, but part of this requires we wait and see.”

Or will Mexico’s president-elect become the perfect foil to Trump? Only time will tell.