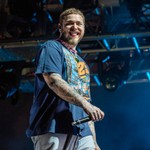 “We created Maison No. 9 to be enjoyed alone as well as mixed with other flavors,” Post said in a statement to Billboard. “We’re really doing new s–t with rosè. It’s great by itself, but can also add so much to other cocktails. We developed it to showcase the versatility of Maison No. 9.”

Maison No. 9’s co-founder James Morrissey added: “We told our mixologist to test our rosé with multiple types liquors and fruit profiles in search of some signature recipes — when the inénovation began, we started to see some incredible recipes come to life. We are excited for you to taste the results.”

Want to try the Maison No. 9 Fig Old Fashioned? Order a bottle of Post Malone’s rosé with one-hour delivery via Drizly here.

Earlier this month, Post Malone and his team paid a visit to the Maison No. 9 winery to access the situation after wildfires broke out in mid-August in the Var region, near the South of France. He later hosted a dinner for a few of the firefighters to thank them for their efforts in saving his crop. Per a rep, “[The team] was saddened to see the damage to an area they’ve grown to love so much but were very thankful to see that their grapes were saved. Post and his team were so moved by the firefighters hard and brave work.”