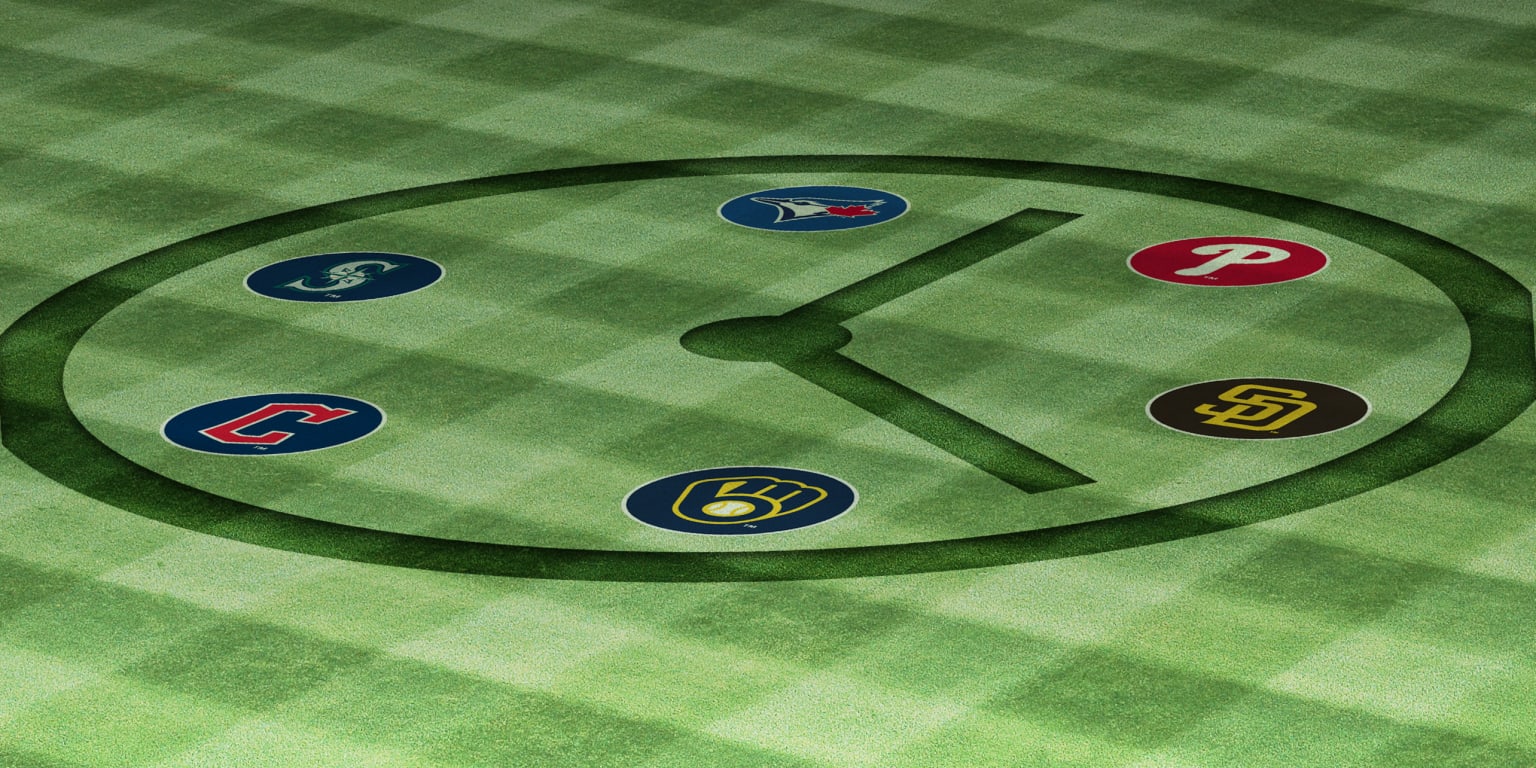 The regular season is wonderful. But let’s not kid ourselves: Ultimately, you’ve got to get yourself into the playoffs. That’s where the magic happens. A year ago, the Braves had lost Ronald Acuña Jr. to a season-ending knee injury and were amid what seemed to be a desperate Trade Deadline clamor to cobble together something resembling a Major League outfield. Two and a half months later, they’d won the World Series. October is what it’s all about.

But you’ve got to get in. No team has clinched a playoff spot, but using FanGraphs Playoff Odds, there are four teams that are currently given 100% odds of making the postseason: The Yankees and the Astros in the American League, and the Dodgers and Mets in the National League. Which means there are eight spots open for, by my estimation, 14 teams: the Blue Jays, Braves, Brewers, Cardinals, Giants, Guardians, Mariners, Orioles, Padres, Phillies, Rays, Red Sox, Twins and White Sox. (These are also all the teams that FanGraphs has with playoff odds of better than 1 percent and less than 100.)

That means six of these teams aren’t going to make it. And a lot of these teams really need to make the playoffs. Thus, with two months left, we take a look at the Playoff Urgency Rankings, weighing just how much these 14 teams need to make the postseason this year. How much will it break fans’ hearts to fall short? How much of a disappointment would it be? And conversely, how much would it mean for them to get in? Here’s a ranking of the 14.

I mean, it has to be, right? The Mariners have the longest playoff drought in the major North American professional sports; the last time they made it was 2001, their 116-win season. Julio Rodríguez, their star player, wasn’t even 1 year old. The Mariners definitely know how important this year is, which is why they traded so much for right-hander Luis Castillo: The time to strike is now. This is a great baseball fanbase that deserves October baseball. They’re on pace for an AL Wild Card spot right now. For their sake, and the sake of those long-suffering fans, they need to hang onto it.

Can you imagine if the Padres had some sort of collapse and missed the playoffs? Can you imagine? OK, so it’s pretty difficult to imagine, but it’s fair to say, after going all-in on Juan Soto and trading away nearly the entire top tier of their farm system, the Padres are pretty invested. Do they have to win the World Series this year? With Soto on the roster at least through 2024, they’ll get a couple more bites of the apple. But the assumption is that they’ll be in October, with room to spare, all three of those years. It’s honestly hard to fathom what would happen if the Padres fell short this year. Almost as hard to fathom as it happening at all.

All told, you could make an argument they belong in that first group of assumed playoff teams. They’re comfortably in that first AL Wild Card spot, and FanGraphs actually has them as more of a lock than the Padres. I’m not so sure of that, if just because of the number of other contending teams in the AL. There’s no doubt, though, that they’re well-positioned, and it’s a good thing, because for all the excitement about the young talent on this team and all the spending the front office has done, they still haven’t won a playoff game since 2016, when José Bautista and Edwin Encarnación were their stars. The division is out of reach, but they very well could host a playoff series if they play their cards right. They wouldn’t dare miss another opportunity, would they?

Milwaukee might have been a little lower on this list before the Trade Deadline. But when you send off your All-Star closer — and one of the most beloved players on the roster — right in the middle of a pennant chase, you better not fall apart down the stretch. One can understand the argument for trading Josh Hader while still understanding why Brewers fans might be upset about it. Part of the Brewers’ mindset was that sending off Hader would help them in the long term but not cost them the division in the short term. They better be right. Because if you’re not too careful, you might just outsmart yourself.

Speaking of NL Central teams with a pretty huge couple of months coming up, the Cardinals will have to justify their reluctance to truly take part in the Soto sweepstakes. It’s outside of this organization’s personality to ship off their whole farm system the way A.J. Preller just did; they do not see anything like “windows” and believe they have to compete every year. The thing about that though is that you have to compete this year. If you’re going to lay off Soto, you better win now. This is particularly true when you’re saying goodbye to legends Yadier Molina and Albert Pujols at the end of the year. You don’t want to squander that goodbye. They need this division every bit as much as the Brewers do.

Depending on how close you think the Giants are, you can make a case that these three teams are going for two spots. The Phillies are fighting for the NL Wild Card spot that whoever doesn’t win the Central is trying to get, and their Deadline trades made it clear that Philly isn’t letting Bryce Harper’s absence drain them of any hope. Harper’s absence — and the excuse it could theoretically provide — is the only reason they’re below the Cardinals and Brewers here, but considering they have the second longest playoff drought in baseball (2011), you could absolutely put them above both.

Some of us picked the White Sox as their second-best bet to win the World Series this year, which hasn’t aged particularly well. But the mindset made sense. This is a team with a ton of talent in its prime, an owner who wants to win right now, a farm system that isn’t producing a ton of future talent, a division that isn’t particularly terrifying and a manager who, well, likely isn’t thinking about how his team’s going to be doing in 2030. That’s to say: The time is now. For all their headaches this year, the White Sox are only three games out of the AL Wild Card and in the AL Central, which means everything they wanted out of this season is still in front of them. But if they fall short this year … there is going to be a pretty huge reckoning on the South Side.

Yes, FanGraphs has the White Sox with better playoff odds than the Twins despite Minnesota’s edge in the standings, which speaks to the fact that the Twins have a tougher remaining schedule, and presumably an assumption by the computer the White Sox have underperformed thus far. The Twins came into this season basically acting like their disappointing 2021 was an anomaly, and so far, they’ve been proven right. They’re in first place despite some issues with their pitching staff, issues they tried to address at the Deadline. Much of the urgency for 2022 comes from the fact that they’re probably only going to have Carlos Correa for this season before he opts out; you best win while you’ve got him.

One of the Rays’ whole modus operandi is that they’ve never too all-in for one season: They’re always making sure to think three or four years ahead. But there’s no question we’re in a peak period for the Rays. They’ve had a .596 winning percentage of better three straight years, they won 100 games last year, they made a World Series a couple of years ago. But this year has been more of a struggle. They’re still holding onto an AL Wild Card spot, but it feels a little precarious, and there’s a sense that this Rays team is a notch or two below those of the past.

Even with Acuña not looking quite like himself since returning from the knee injury that cost him most of last year and some of this year, it has become settled wisdom that this Braves team is better than last year’s … you know, the one that won the World Series. They’re well-positioned for the playoffs, but if something fell apart down the stretch and they somehow finished out of the running, Braves fans will be so upset they will have to bust out their 2021 World Series DVDs to make them feel better. It’d be a major step backward to miss the playoffs. But they did just win the World Series and seem like a near lock to at least make the NL Wild Card round.

First off, they’re the Red Sox, so there’s always some urgency. That said, the vibes have been off for the Red Sox for a couple of months now, and you can tell the team knows it by how relatively passive they were at the Deadline. Sure, they held onto J.D. Martinez and brought in Tommy Pham and Eric Hosmer, but neither is a game-changer, and they basically just got Hosmer for free anyway. They’re clearly still in the race — they’re only four games out of the AL Wild Card. But they’re also a last-place team that’s barely over .500, and they don’t seem to have any illusions about it. They’ll accept a late-season run if it happens. But they’re obviously not counting on it.

The Giants are just barely hanging on in the NL Wild Card race, but they didn’t entirely punt, as you can tell by the fact that Carlos Rodón is still on the roster. This was a team that, we remind you, won 107 games last year, and you never know when a team like that’s going to make a run. But the fanbase can still take solace in winning three World Series titles not that long ago.

Of all the fun ways for this season to end, “Baltimore in the playoffs” would be one of the most gloriously entertaining ones. This team is an absolute blast right now. It has been particularly enjoyable to see them almost casually winning series against teams like the Rangers, Angels and Cubs in recent weeks, treating them like speed bumps. Even with the all the excitement, a team that trades away Trey Mancini and Jorge López at the Deadline still sees its true contention window as a year or two from now. It’s all bonus time for the Orioles in 2022. In 2023? Then the temperature starts rising.

Cleveland is only one game out of the AL Central and two games out of the AL Wild Card. But the club didn’t make a single move at the Deadline other than trading away Sandy León and sending down Franmil Reyes. They could still make the playoffs: They’re quite well-positioned, actually. But they also have holes they didn’t fill. So they get the last spot here.