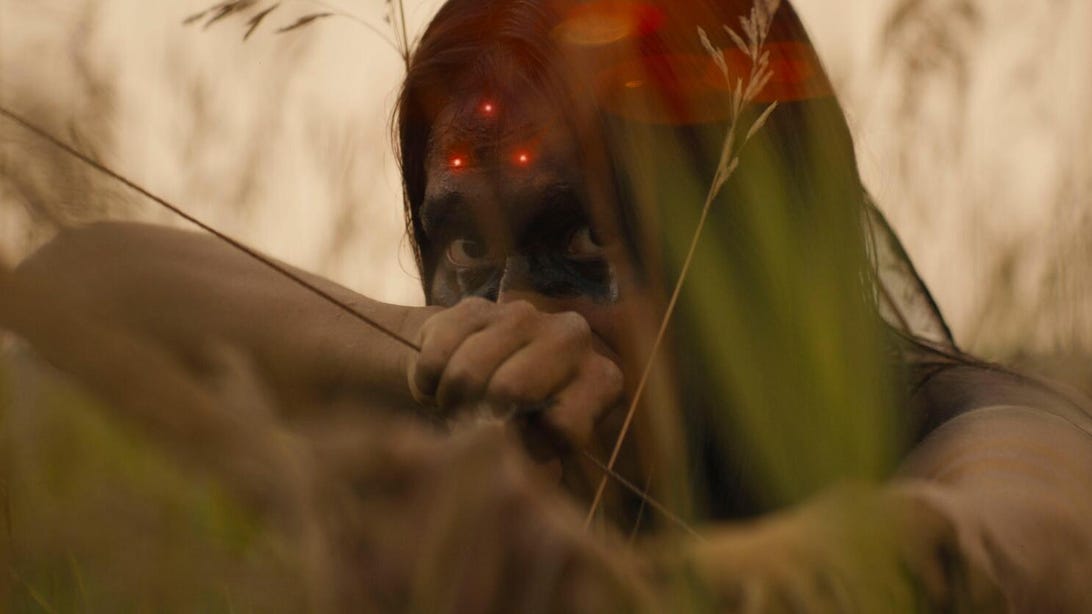 Predator prequel Prey — that’s fun to say out loud — came to Hulu on Friday (and Disney Plus Star outside the US), bringing the iconic sci-fi series back to 1719. It pits one of the alien hunters against Comanche Nation tribespeople like Naru (Amber Midthunder), and it’s absolutely excellent.

“This is easily the best Predator movie we’ve had since the original, with a well-developed protagonist (and her excellent dog), a rich cultural basis and clever use of an iconic movie monster,” I wrote in my CNET review.

It builds to a memorable finale, hints at what happened afterward in its beautiful animated credits sequences and includes an awesome reference to 1990’s Predator 2. Let’s dive in — but be warned: This stuff will make you a SPOILER Tyrannosaurus, just like me.

We can kill it

Having seen her fellow Comanche Nation warriors and the deeply unpleasant French poachers slaughtered by the Predator, Naru lures the beast into a trap in the dark forest. She kills it using a combination of her knowledge of the environment, the weapons she’s gathered (including a familiar flintlock pistol with the engraving “Raphael Adolini 1715” — more on that later) and the Predator’s own tech.

Covered in the alien’s luminous green blood, she brings its decapitated head back to camp and is honored as a hunter by her tribe. It mirrors the sequence in which her brother Taabe (Dakota Beavers) did so with the lion earlier in the movie, after she failed to. In killing the Predator that took Taabe’s life, Naru has proved herself to be the tribe’s biggest badass.

And they all lived happily ever after. Except…

We get a supercool animated recap of the movie’s events over the first section of the credits, with one additional wrinkle. The final image pans to show a Predator ship coming out of storm clouds over Naru’s camp, implying that the aliens attacked again. Which doesn’t seem sporting of the Predators — you lost guys, go home.

It’s unclear how these events played out — perhaps we’ll find out in a sequel sometime — or when they took place. It’s possible that they left Naru in peace and the image is a metaphor for later hunts involving humans, since the original Predator and its sequels reveal that the aliens are kinda obsessed with battling us.

That might be wishful thinking though, since the flintlock pistol Naru got from murdered French poacher Raphael (Bennett Taylor) offers us a clue. It’s on her belt when she returns to camp, but fans will know it shows up later in the series.

In Predator 2, which takes place in 1997, LAPD Lt. Mike Harrigan (Danny Glover) and the main Predator — known as the City Hunter — battle on one of the aliens’ ships. After the human triumphs, a bunch of other Predators decloak and seem ready to murder him.

Instead, one of them flings him a gift — Raphael’s 282-year-old flintlock pistol.

“Take it,” the Predator growls to an astounded Harrigan.

At the very least, this proves that the Predators took back this gun at some point in the intervening years. They could have killed Naru (since the credits image suggests they attacked her again), allied with her (humans are accepted by Predators in the Alien vs. Predator comics and the 2004 movie) or just retrieved it after she died.

Prey apparently overwrites the events of the 1996 comic Predator: 1718, in which one of the aliens teams up with a pirate captain to battle his mutinous crew. The movie’s Raphael, the only one of the French poachers who doesn’t act like a total dirtbag, is presumably the one whose name is engraved on the weapon.

The Alien vs. Predator comics were originally published by Dark Horse, but the license transferred to Marvel in the wake of parent company Disney nabbing the Alien and Predator rights after its 2019 Fox acquisition. They aren’t currently available to read digitally, but Marvel might rerelease them like it did with Dark Horse’s Star Wars comics.

Movies Coming in 2022 From Marvel, Netflix, DC and More