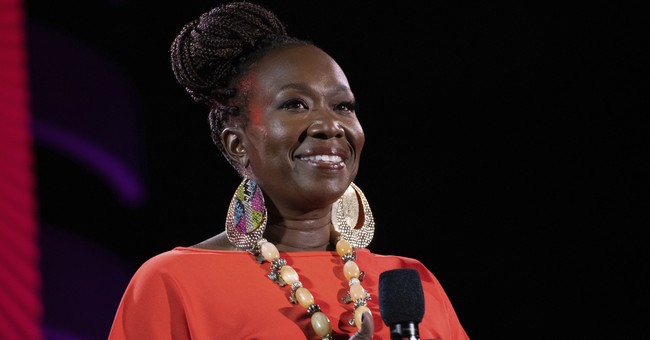 I’ve said it before: It’s almost like MSNBC’s race-hustler-extraordinaire Joy Reid tries to outdo her hateful self on every episode of The ReidOut. In this episode, the race-obsessed host launched an attack against Florida Gov. Ron DeSantis for masterfully sending 50 illegal aliens to Martha’s Vineyard, beautifully leading smug Vineyard liberals to promptly lose their hypocritical minds — exactly as he knew they would.

As reported by NewsBusters, Reid used the Martha’s Vineyard story as an excuse to harken back to DeSantis informing high school students at a public event that they weren’t required to wear masks as the equivalent of “whipping up a mob at the University of Mississippi because James Meredith was coming, and then cheering it on as four people are killed in that mob.” The woman has zero shame.

After laughing hysterically, I once again came to the conclusion that, while Reid and her race-hustling nonsense are irrelevant, it’s incumbent on all of us, as Rush Limbaugh frequently said, to expose these hateful clowns as often as possible and allow them to speak as much as they want — and they will show us exactly who and what they are. Joy Reid is the poster child for Rush’s advisement.

Reid kicked off her latest histrionic fit by nearly screaming about DeSantis “yelling at kids because they have masks on to protect themselves. Suing cruise lines because they would dare to try to stop COVID from getting on the ships with the passengers. The things that he does don’t have policy priorities.”

The delusion is breathtaking, isn’t it?

Reid’s guest was Adam Serwer, the author of the New York Times best-seller The Cruelty Is the Point, and former Buzzfeed News and Mother Jones writer. Get it? Of course, you do. Here’s some of his racist nonsense, as transcribed by NewsBusters:

I think it says that we have a system that is kind of majoritarian, and it rewards a specific coalition that has ideally, geographically distributed to exploit the — to win the Electoral College or to control the Senate. And because of that, it is very important for the party that represents this coalition to make sure that they always feel like they are on the verge of apocalypse, that they are being threatened by these people who are different from them.

When you’re in that kind of situation, you think your back’s to the wall, your back is to the wall. You think the apocalypse is nigh. Then you are willing to do crazy things, or cruel things because you’re thinking, well I’m doing this to defend myself, this is for my survival.

I’m trying to save the country. And that gives you license. That gives you license to be cruel in this particular way. And I think that’s why, when you see these Donald Trump or DeSantis giving these sort of outlandish speeches, where like the liberals are doing this, the liberals are doing that, and it’s some sort of crazy insane conspiracy, the point is to make these people afraid so that they are willing to justify cruel acts towards people that they see as threatening them even if all those people are trying to do is come to this country and try to have a better life.

100 percent unadulterated delusion. Needless to say, Reid couldn’t get enough of it.

You’re right about this. And you talk about this, the fact that lynchings were like a party and it was the act of being cruel together. It wasn’t just doing the violence, but it was the license to do violence, and the license to do violence together. So there is this horrible American tradition of this and I just wonder if there’s a way to counter politics that somehow mitigates it.

In case you missed any of it, here are a few of Reid’s recent ridiculous outbursts. You’re welcome.

Dow Closes at Lowest Level in Almost Two Years
The Left Wants Us to Think Flying Migrants to Martha’s Vineyard Will Hurt DeSantis. They Are Wrong