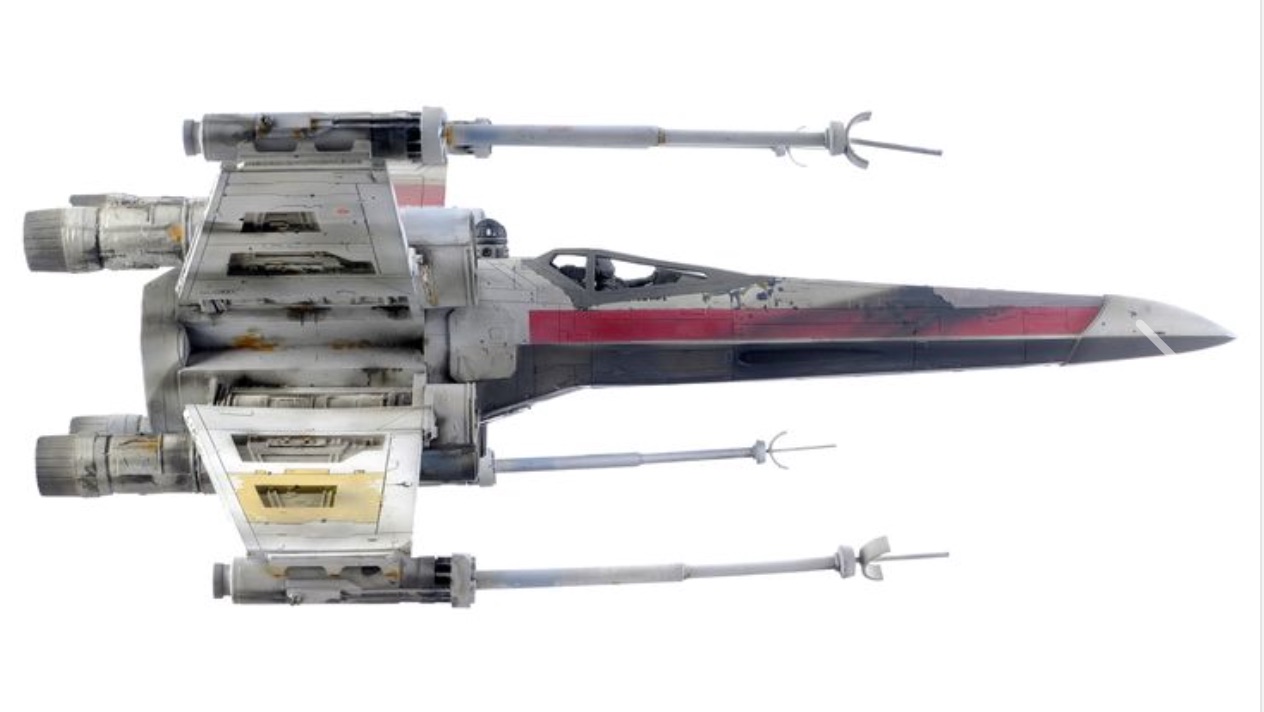 Propstore, one of the world’s largest and most respected Hollywood memorabilia and collectible auction houses, hosts its summer kickoff event this week, with over 18,000 items across a full spectrum of  movie, TV and pop culture franchises up for sale from Tuesday to Thursday (June 21-23).

In addition to lots like a light-up DeLorean time machine replica from the “Back to the Future” trilogy, Thor’s (Chris Hemsworth) stunt Mjolnir Hammer from 2011’s “Thor,” and Johnny Depp’s SFX hand from 1990’s “Edward Scissorhands,” the crown jewel of the auction is an incredibly rare original X-wing Starfighter (opens in new tab)model used in the filming of “Star Wars: A New Hope.” Pre-auction estimates have this scarce gem potentially selling for between $500,000 – $1,000,000!

Measuring  22″ x 18″ x 8″ (56 cm x 46 cm x 20 cm), this 1:24 scale ILM-built X-wing fighter is one of only a handful of actual filming miniatures created for “Star Wars: A New Hope.” This authentic model was originally built as the Red Leader (Red One) pyro model that survived its rear explosive charge, then was repainted slightly and dressed as a Biggs (Red Three) model with extra wing stripes and other touches. It’s made with light-weight rigid foam with airbrush details.

According to the catalog, it’s believed to be the only surviving X-wing model from the original “Star Wars” that exists in a private collection. No other high-quality pyro examples are known to have survived filming, and the four hero models are in the private collection of George Lucas.

This “Star Wars” X-wing is registered as Lot #386 and will be auctioned on Tuesday, June 21 (opens in new tab). The event begins at 8 a.m. PDT and items are sold sequentially via a live auctioneer. Fans and buyers can register to bid (opens in new tab) or join in to watch the live streaming broadcast on auction day.

Space.com spoke with Propstore COO, Brandon Alinger about this fantastic piece of “Star Wars” history, the research process that went into the relic’s authentication, and why this “Assault on the Death Star” filming miniature is a coveted collectible.

“This has been in a private collection for over 20 years, and the collector that had it believed it to be an original X-wing model from Star Wars,” Alinger told Space.com. “They actually didn’t realize what the full history of the piece was. It was only earlier this year that we got the model and started our own research process and found all the great facts that we did about the history of this specific model. It was a real journey of discovery to go through and start studying photographs from the ILM workshop.”

The first thing the Propstore team found was a photo of the model taken by ILM modelmaker Chris Cassidy, where it’s sitting on a workshop table with its nose pointed to the ceiling.

“You can see the top of it and it’s marked as Red Three and we could match every bit of it,” he adds. “But because Red Three in the movie is Biggs and it blows up, we assumed that this was a model that wasn’t filmed on. It was in the process of searching for additional reference photos that we found some good pictures of Red One, or Red Leader, and we realized almost all the details matched up as well. Then we pieced together the history and it started life as Red One, did a pyro explosion, and then they slightly repainted it to be Red Three and that’s how it finished its life. We don’t think it was ever shot as Red Three, but it is in the movie as Red One.”

For this X-wing pyro model, the majority of the components were cast out of molds. The ILM crew would have scratch-built the master patterns, made rubber molds from that, then cast them in a two-part rigid foam material and added extra dressing and parts out of model kits for detail.

“It’s extremely light and had been in a storage crate for many many years. The condition is pretty spectacular. It has minor issue of warpage to one of the cannons, but overall it’s in amazing shape and has been well preserved for the future.

“The response to this model has been huge,” Alinger notes. “People always look at ILM models as one of the grails of “Star Wars” collecting when people make their dream prop wish list. The Millennium Falcon comes up frequently and that one is still in George Lucas’s collection. The Death Star is out there with a private collector and that’s well known, and there’s a TIE fighter and a Y-wing model out there in private collections.”

As far as Alinger knows, this is the first X-wing model from the original “Star Wars” that is an intact, complete X-wing that can be identified in behind-the-scenes photos and screenshots that still exists in private collections anywhere today.

“That’s why ‘Star Wars’ fans and collectors are so excited about it. It’s been an honor for us to handle it and have it here at our facility, and do the research and spend a lot of time staring at photos and counting stripes on wings. One of the most fun aspects for us in this world is uncovering material for the first time and presenting it to collectors. This is what we’re here to do, so to speak.”

China plans to return Mars samples to Earth in 2031: report
Summer solstice 2022 celebrated on Earth and in space (photos)