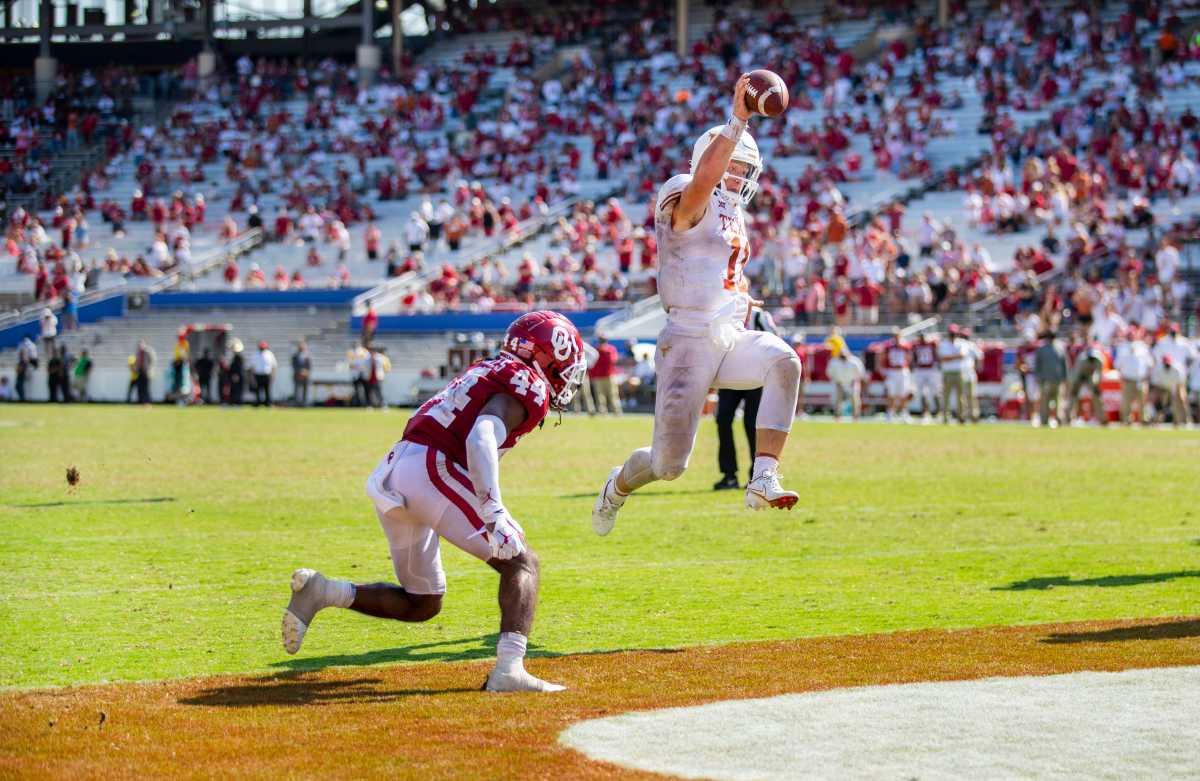 One of the most interesting picks that the Indianapolis Colts made in the 2021 NFL Draft was taking Texas quarterback Sam Ehlinger in the sixth round with the 218th overall selection.

They needed a backup quarterback to compete with Jacob Eason behind Carson Wentz, and an NFL veteran made the most sense due to Eason’s lack of experience both collegiately and in the NFL.

However, they got a collegiate veteran instead in Ehlinger, who is a two-time team captain that started 43-of-46 games in Austin, spanning three-plus seasons.

If they weren’t going to get an NFL veteran free agent, someone like Ehlinger is about the next best thing.

Ehlinger spoke with reporters on Saturday afternoon for the first time since becoming a Colt.

Here are the quick hits.

I had a lot of great meetings with them just talking ball. It was a great process and I really enjoyed talking with everybody. I’m just blessed to be a Colt and I can’t wait for what is to come….

No, I haven’t talked to any of that. I think they are just letting me soak up the opportunity in the moment. It hasn’t been anything that we’ve talked about, but I can’t wait to get up to Indianapolis and talk about that.

Ehlinger is looking forward to learning as much as possible in Year 1. Also, being a late-round pick, he wants to help the team in whatever way possible: Late-round quarterbacks obviously enter a situation where they know the plan is not for them to be the starter, but rather to soak up as much as possible and stand out on the practice field.

I think first off, just learning as much as possible. Learning what it takes to be successful at the next level. Obviously, going into my rookie year there are going to be a lot of learning curves and getting great coaching and learning as much as possible is my main objective and doing whatever it takes to help the team be successful. At the end of the day, I am going to do whatever it takes to make everybody in the organization better and that’s my objective.

I think adversity creates endurance, endurance creates character and character creates hope. That’s something that I’ve built myself on. Whatever that adversity may be, I’m ready for it and I think my mentality going into is, just try to make the team better, whatever that looks like. I know it might not be a starting position right away, but I understand that this is going to be my job now and I’m ready to complete my job to the utmost ability and helping the team in whatever way possible to win. That’s the ultimate goal at the end of the day. This isn’t an individual sport. This is a team sport and I’m willing to do whatever it takes to help the team win.

What happens next for the Colts? Don’t miss out on any news and analysis! Take a second and sign up for our free newsletter and get breaking Colts news delivered to your inbox daily!

Ehlinger hasn’t yet met Carson Wentz, but he is already familiar with Jacob Eason: Starting at Texas since 2017, Ehlinger has been around and seen some solid players over the years. Although he hasn’t yet crossed paths with Colts starting quarterback Carson Wentz, he has met current Colts QB2 Jacob Easob.

No relations with Carson, obviously an incredible player. I can’t wait to be around him. And then Jacob, we’ve met a few times at some QB camps, and I’ve always enjoyed being around him. Just a great dude, obviously has a cannon for an arm, so just really excited to be around both of them. Obviously, both great quarterbacks but great people as well. I really appreciate the way Carson carries himself and has trademarked the ‘Audience of One,’ deal and that’s something that I’ve tried to follow as well, so I can’t wait for it.

Ehlinger is more mobile and athletic than most quarterbacks, but his understanding is that quarterback is still his primary role: Teams can get creative in the ways they use big, athletic quarterbacks like Ehlinger (see Taysom Hill with the New Orleans Saints), but the rookie only sees himself as a quarterback right now, although he is open to helping however the team wants.

No, teams really haven’t talked about that. I think that that is kind of an understood that I’m here to play quarterback and I’ll do whatever it takes to help the team win. That’s my mentality and I’m willing to do whatever that takes.

Ehlinger sees working with Frank Reich as a great opportunity: Colts head coach Frank Reich appears to have gotten the most out of many of the quarterbacks who have played under him, including Andrew Luck, Carson Wentz, Philip Rivers, Nick Foles, and Jacoby Brissett. Ehlinger can’t wait for the opportunity.

How do you feel about the Ehlinger pick? Drop your thoughts below in the comment section!