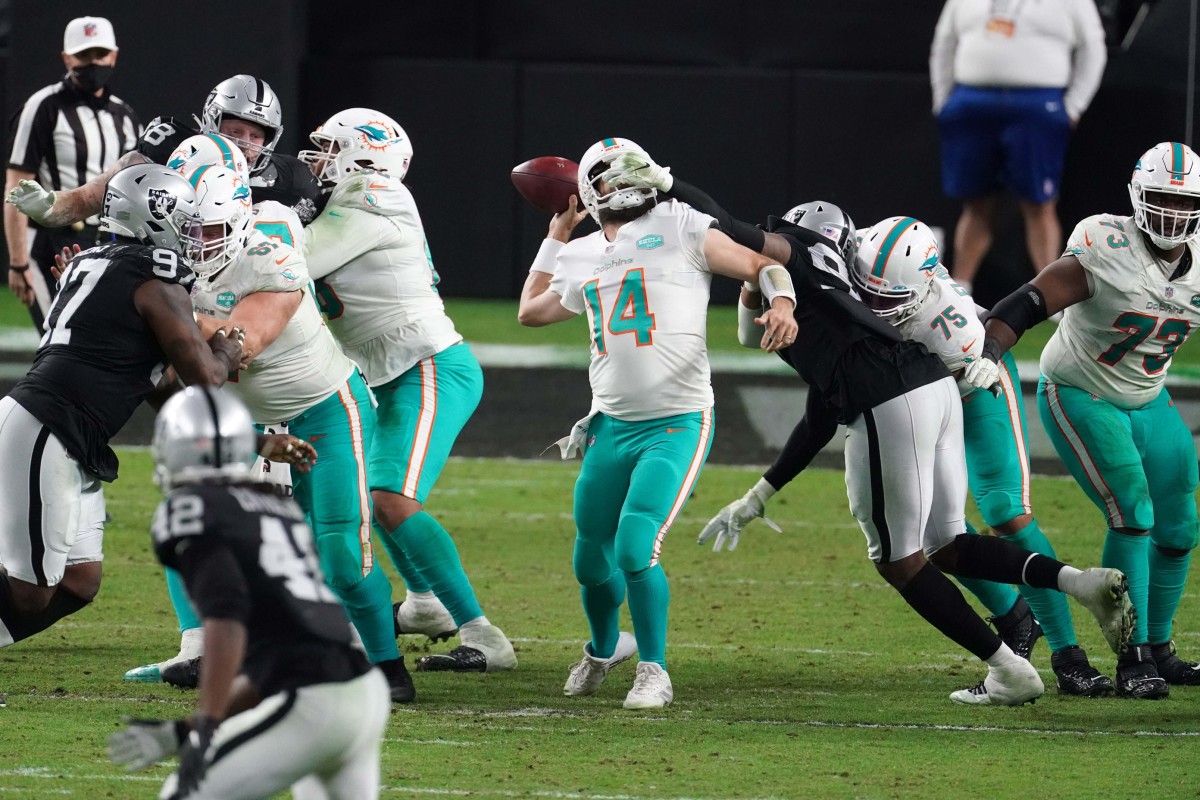 Ryan Fitzpatrick may be gone, but he left some good memories from his time with the Miami Dolphins and probably none bigger than the fantastic finish at Las Vegas last December.

Fitzpatrick relived that moment on the ESPN Daily Podcast while revealing an interesting nugget: He basically didn’t throw after he was replaced in the starting lineup by 2020 fifth overall draft pick Tua Tagovailoa.

“I wanted to prove to myself that I could come off of not just the bench but I could come out of the stands in five years and come and play in an NFL football game and be ready and so I didn’t really throw at all after Tua went in,” Fitzpatrick said on the podcast. “I stayed mentally sharp and ready and was still running, but I did not really throw a football during practice, especially during like a practice setting against the defense.”

While Fitzpatrick was very forthcoming in expressing his disappointment at being replaced by Tagovailoa after coming off back-to-back three-touchdown games in blowout victories against the 49ers and the Jets, he said his decision to scale back his throwing in practice was not a protest but rather a move to help third-string quarterback Reid Sinnett.

“”I was fully into helping Tua,” FItzpatrick said, “and I wanted this young guy who otherwise would get zero reps throughout the year to have an opportunity because I was in his shoes once, and I sat there as a third- and fourth-string guy, and just watched, and watched and watched and never had any opportunity to get better, so I saw it as a way to help Reid, I saw it as a way for me to give extra help to Tua.

“And I also saw it as a way to prove it to myself that I could come out of the stands five years from now and still play this game.”

Fitzpatrick made three appearances after losing his starting job, coming off the bench in the games at Denver and Las Vegas and starting the game against the New York Jets at MetLife Stadium when Tagovailoa was sidelined with a leg injury.

Fitzpatrick spent two seasons with the Dolphins before signing this offseason as an unrestricted free agent with Washington, where he’s expected to be the starter.

That game at Las Vegas ended up being his last one with the Dolphins because he was forced to sit out the finale at Buffalo the following week after landing on the COVID-19 list.

His 34-yard pass to Mack Hollins while getting his facemask twisted set up Jason Sanders’ game-winning field goal in the 26-25 victory against the Raiders and was his last completion for Miami.

RELATED: Anatomy of a Wild Finish

This is how he explained the play:

“I’ve been known in my day to dial some stuff up to draw it in the dirt, if you will, and that particular play I had a very good feeling they were going to be playing Tampa 2,” Fitzpatrick explained. “So I had a very good feeling, they’d have a Mike linebacker kind of running with Mike Gesicki, two safeties, and if I could spend enough time staring at Mike I might just might have a chance to hit our single receiver down the sideline.

“And so rarely when drawing plays in the dirt do they happen exactly like you think that they’re going to happen — and my career can be a testament to that — but this one did. They came out in the defense we thought they’re gonna come out in, I peeked to the left and then stared down Mike and stepped up in the pocket and the safety on my left all of a sudden starts running towards Mike, and I’m in the middle of this play like, ‘Oh my goodness, like this is really gonna happen.’

“So we completed the play. Flag. I had no idea after I had thrown it that it was completed, I just knew that my head almost got ripped off. But the amazing thing about that play is like we needed those 15 yards to get into field goal range, and it was just, it was such a cool play. It was an amazing moment.”