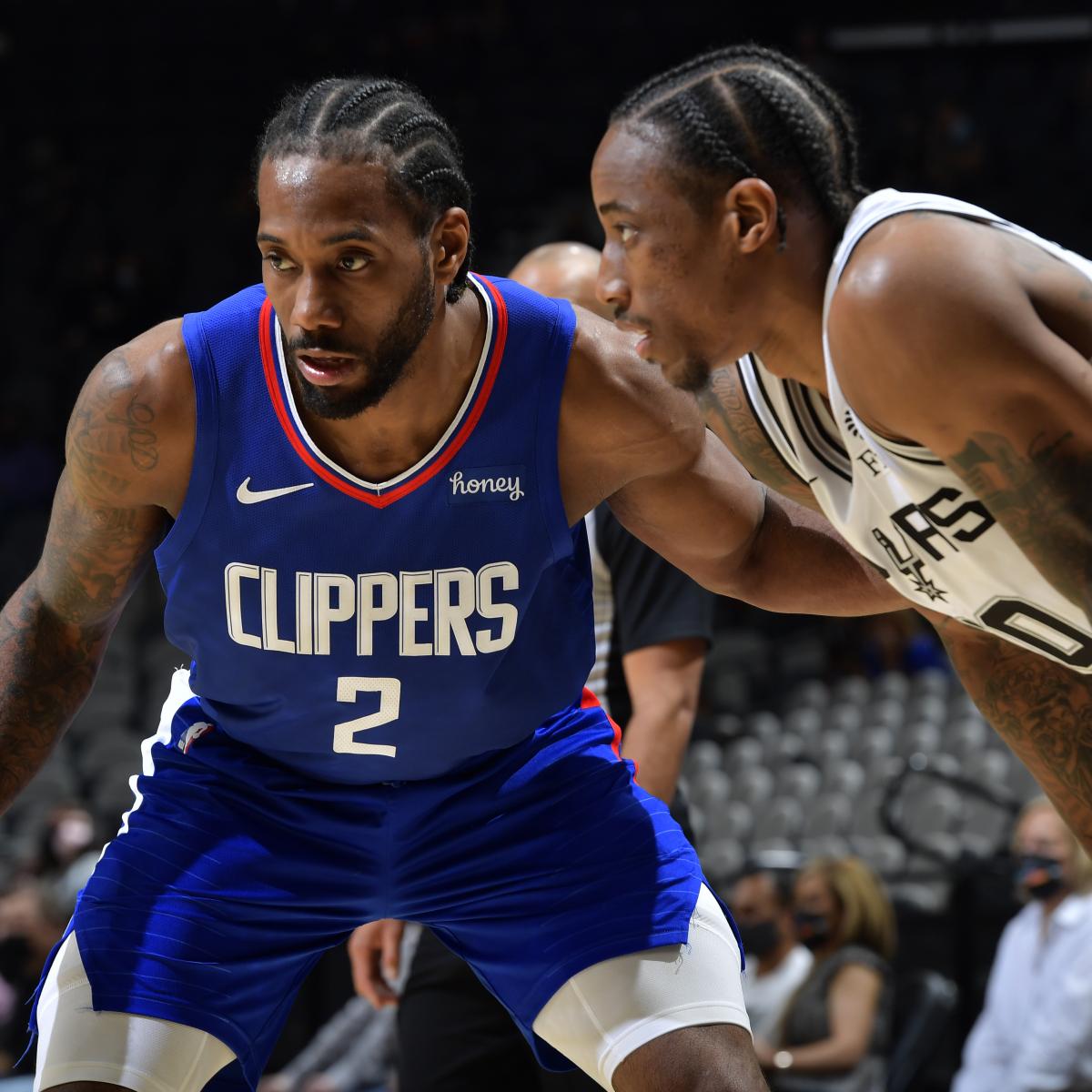 Just a couple of weeks shy of the official start of the NBA’s 2021 free-agency period on August 2, there’s still time to dive into this offseason’s class of potential difference-makers.

While this summer isn’t loaded with available superstars, there are indeed difference-makers at every position.

As the lines between traditional designations continue to blur, and positionless basketball takes hold, it makes less and less sense to separate them here.

So, in anticipation of free agency, we’ll provide lists of the top guards, forwards and bigs available. You might quibble over the classifications of a few players here and there. Some judgment calls were made. But for the most part, placement was pretty easy once the three categories were established.

The subject we’ll tackle here is the second one. And we’ll include three-and-D wings, point forwards, old-fashioned 3s and everything in between. In a word, forwards.

Of course, prognosticating is far from an exact science. And though age, size, advanced metrics and forecast systems like FiveThirtyEight‘s help, we can’t avoid a hefty helping of subjectivity.

When all those factors are tossed into the pot, the following stew eventually comes out.

Carmelo Anthony embraced a bench role in 2020-21, and he did plenty of good things there.

The defense is a problem—and will be for the rest of his career—but a big who can space the floor in limited minutes can help various lineups. Melo shot a career-high 40.9 percent from three this season.

Justise Winslow’s stint with the Memphis Grizzlies was a legitimate disaster. In his season-and-a-half there, he appeared in just 26 games, averaged 6.8 points and shot 18.5 percent from three.

His size, defensive upside and a touch of playmaking make him an intriguing option in today’s positionless NBA.

“Denver Nuggets G/F Will Barton has declined his $14.7M player option for the 2021-2022 season and will become a free agent,” ESPN’s Adrian Wojnarowski reported. “There’s a strong interest between the organization and Barton to negotiate a new deal once free agency opens in August.”

Denver wanting to hang onto Barton makes sense. Its point differential per 100 possessions has been 5.5 points better when he plays over the last two seasons. He adds an off-the-bounce dynamic that makes the Nikola Jokic-led offense even less predictable. And he can guard multiple positions.

Otto Porter Jr. hasn’t been able to stay anywhere near healthy for three years now (he averaged fewer than 33 appearances per season over that stretch). So, signing him is a bit of a gamble. But he’s still just 28 years old and theoretically offers the kind of versatility many teams are after.

At 6’8″, he can reasonably be expected to guard 2 through 4 (and even 5, if the opposition goes small). And his 40.2 career three-point percentage ranks 39th all time.

At 6’4″, Kent Bazemore may be a little shy of the ideal size to play the switch-heavy, multipositional wing so many teams are after. At 32, he’s not the youngest option for the role, either.

But his combination of competitiveness, experience and outside shooting (40.8 percent from three in 2020-21 and 35.6 percent for this career) will surely have him on plenty of teams’ free-agency big boards.

With a 40.7 career three-point percentage and limited attention paid to other parts of his game, Doug McDermott is likely known to most as a three-point specialist. And that’s likely what he’ll be on whatever team signs him.

McDermott has developed a hint of an off-the-dribble game, though. There were only 21 players this season who matched or exceeded both his marks for driving field-goal attempts and field-goal percentage out of drives.

Rudy Gay’s transition from first or second scoring option as a wing to something of a floor-spacing big has been smooth. And despite less gaudy basic numbers, his four years with the San Antonio Spurs have been solid.

In just 23.0 minutes, Gay has averaged 11.9 points and shot 36.4 percent from three. And this past season alone, San Antonio was plus-4.4 points per 100 possessions when Gay played and minus-5.7 when he sat.

Lop off Kelly Oubre Jr.’s extremely cold start (the first 10 games of the season) and his numbers probably look closer to what Golden State Warriors fans expected of him. From his 11th appearance on, he put up 16.6 points, 6.1 rebounds and 1.8 threes while shooting 35.5 percent from three.

That’s still below-average efficiency from deep, but it’s close enough to make defenders honor him outside. And when you combine that with solid size (6’7″), athleticism and versatility, the 25-year-old Oubre is worth a shot.

Nicolas Batum appeared to be nearing the end of his NBA career during the 2019-20 season. He played in just 22 games, averaged 3.6 points and had a true shooting percentage more than 10 points below the league average.

But after the Charlotte Hornets stretched his contract to make room for Gordon Hayward, the Los Angeles Clippers added him to the positionless units they could deploy. And playing for a contender revitalized Batum.

His basic numbers from this past season (8.1 points, 4.7 rebounds, 2.2 assists, 1.6 threes and 1.0 steals) still don’t leap off the screen, but he provides a little bit of everything.

And in today’s NBA, multipositional defense (Batum even played some 5 in the playoffs) and three-point shooting (he knocked down 40.4 percent of his threes in 2020-21) go a long way.

Duncan Robinson experienced fairly significant declines in both three-point percentage and effective field-goal percentage this season, but he remains one of the league’s best in both categories.

He converted on 40.8 percent of his 8.5 threes per game in 2020-21 and only took 10.0 shots total. That kind of constant pressure on the perimeter, where Robinson is also one of the game’s best off-ball movers, opens up a ton of room inside for bigs and slashers.

Let’s preempt a couple of likely questions or concerns right off the bat.

First, the 6’4″ Talen Horton-Tucker finds himself among the forwards because Basketball Reference pegs over 60 percent of his career possessions at the 3 (Cleaning the Glass has him at the 1, so maybe this is just a take-your-pick situation).

The second concern comes down to raw production, and THT doesn’t have a ton. In his two NBA seasons, he’s averaged a well-rounded (though maybe not inspiring) 8.7 points, 2.6 assists, 2.5 rebounds, 1.0 steals and 0.6 threes.

When you factor in age and playing time, though, Horton-Tucker’s free agency becomes far more interesting.

The only players who match or exceed his marks for true shooting percentage (53.6) and points (16.3), assists (4.9) and rebounds (4.6) per 75 possessions through an age-20 season are LaMelo Ball, Luka Doncic, Magic Johnson and Chris Paul.

With multipositional versatility and athleticism to go with some playmaking chops, THT has about as high a ceiling as anyone on this slideshow (with the exception of the guy at No. 1). If he figures out how to consistently hit threes (his career mark out there is 28.5 percent), he’ll almost surely be a plus player wherever he goes.

I can’t tell you where to find this stat, but it sure feels like Danny Green is an annual leader in TARPTOT (times a role player trended on Twitter). And unfortunately, he’s often trending for an off shooting night.

What many of the tweets on those occasions fail to acknowledge is that Green is typically impacting games in positive ways that just don’t show up in a traditional box score.

He can guard multiple positions, is a fiend in transition defense and commands attention at the three-point line, even if his shot isn’t falling that particular night.

At 34, Green is likely due for a decline soon, but he’s coming off a 2020-21 in which he shot 40.5 percent from three and had a comfortably positive defensive BPM. He also had a positive impact on his team’s point differential for the 10th time in the last 11 seasons.

It might be easy to jump on the internet with a little quip when he misses a few shots, but Green has proved for a decade that he just helps teams win.

Evan Fournier doesn’t add as much value as Green on the defensive end, but he’s over five years younger and brings a little more punch on offense.

Over his last two seasons with the Orlando Magic and Boston Celtics, Fournier has averaged 18.0 points, 3.3 assists and 2.7 threes while shooting 40.4 percent from three.

He’s not a Duncan Robinson-level floor-spacer and doesn’t have the point forward potential of Talen Horton-Tucker, but he brings a little bit of both.

He also has nearly a decade of experience, including four playoff runs (albeit, short runs).

Yes, DeMar DeRozan just had a negative net-rating swing (the difference in a team’s net points per 100 possessions when a player is on or off the floor) for the 11th time in 12 seasons. It almost feels obligatory to get that out of the way when analyzing his game.

But he underwent an evolution with the San Antonio Spurs that could set up an intriguing second half of his career.

Over his three seasons there, he averaged 6.2 assists (including 6.9 this season). And perhaps more intriguing, his average for potential assists (11.2) isn’t far from his number of shots per game (15.9).

Becoming something of a point forward could prolong DeRozan’s effectiveness on offense, particularly if he’s willing to accept a role piloting a second unit during this upcoming contract.

The defense will probably continue to be a problem (it might even get worse), but he could feast as a scorer and creator against backups.

Kawhi Leonard’s ACL reconstruction not only affects his potential free agency, but it could also completely alter the landscape of the Western Conference. Even if he opts into the final year of his deal with the Los Angeles Clippers, it’s hard to imagine them contending for a title without Leonard.

If he opts out, even at 30 and coming off the major knee injury, Leonard would instantly be one of the biggest prizes on the free-agency market this summer.

His explosiveness is obviously a big part of his game, but he’s not overly reliant on it. And ACL surgeries and recoveries have a better track record than they did in the past.

If he’s 95 percent of what he was athletically, his size, shooting and cerebral game should be able to cover most of the rest. Once he’s healthy again, he figures to be one of the game’s most impactful players.