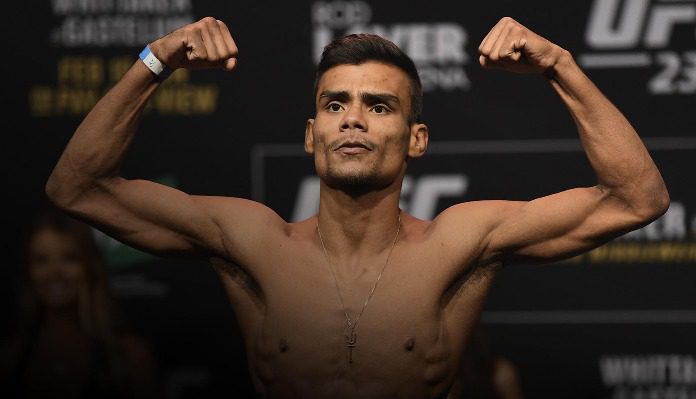 Raulian Paiva believes his UFC 269 opponent in Sean O’Malley wimps out when the going gets tough and put under pressure.

Paiva is coming off a decision win over Kyler Phillips in a hard-fought fight and will now fight O’Malley at UFC 269. It’s an intriguing matchup but for the Brazilian, he says he plans to pressure “Suga” from the get-go and make it a difficult fight for him.

“‘Thominhas’ [Almeida] was basically in the end of his UFC career, and [Kris Moutinho], who took the fight on short notice, was way lighter than him,” Paiva said to MMAFighting about O’Malley. “[Moutinho] could take a beating, but was way inferior,” Paiva said of O’Malley’s most recent victories. And he lost when he tough a top fighter. Marlon Vera is very experienced, has many fights in the UFC, he put pressure over him and that’s it. He wimped out, got desperate and that happened, he got TKO’d.

“There are fighters that only know how to hit but drop in performance when they are under pressure, and that’s what I see in O’Malley,” Paiva continued. “If you give him space he’ll do his thing, but he’ll start to get desperate and make mistakes more and more if you don’t give him space. That’s basically what I’ll do. I’ll make him make mistakes at his own game. I’m going there to pressure him from the first to the third round, if we get to the third round.”

Against Sean O’Malley, Raulian Paiva is well-ware that he can’t allow Suga to get space on the feet. He knows he has the style to do just that and once he starts to pressure O’Malley, he expects the fan-favorite to crack and he will eventually get a submission win.

“I can submit him if he gets desperate, but my hand can land because he keeps his hands low,” Paiva said. “But I believe it’s going to be via submission.”

Do you think Raulian Paiva will submit Sean O’Malley?