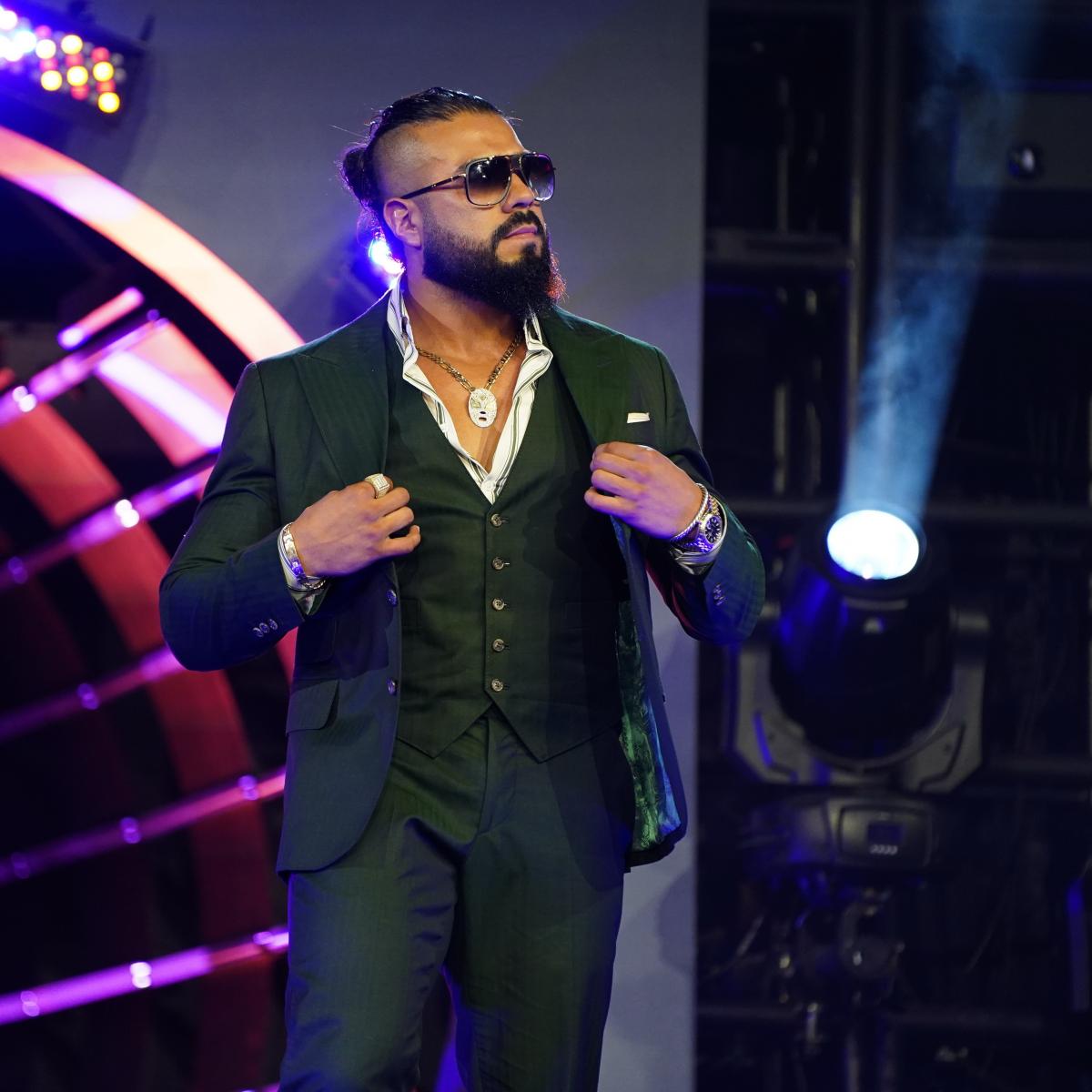 Welcome to the Bleacher Report WWE and All Elite Wrestling mailbag.

The B/R community has always been outspoken, especially when it comes to opinions on pro wrestling and its biggest stars.

We will answer your questions and react to your hot takes about WWE, AEW and the world of pro wrestling.

A wide variety of questions about everything from specific Superstars to broader topics have been submitted. Check out what was on the minds of the B/R community this week.

If you’d like to have your question or hot take included in a future article, be on the lookout each Tuesday afternoon for the crowdsourcing thread on the WWE and AEW streams in the B/R app.

“Hot take: The main-eventers (AJ Styles, Kofi Kingston and Randy Orton) have helped mask the flaws in the Raw tag team division. It’s not great but it’s never the reason for a bad Raw.” (@Dedrater)

Raw currently has The Miz and John Morrison, The New Day, R-K-Bro, The Viking Raiders, Lucha House Party, AJ Styles and Omos, Mace and T-Bar and possibly Veer and Shanky if management decides to use them again.

Overall, this is a decent tag team division with some potential first-time matches still in play. I agree that the Raw tag team division is never the reason for a bad show, but it also hasn’t been given the proper attention in a long time.

It often feels like half of the teams are designed to either get only one guy over for an eventual singles push or keep two people busy until WWE has something for them.

Having top talent compete for the tag titles is a good way to make them seem more desirable. Even though I am not a fan of Riddle or his gimmick, I can admit he and Orton have produced some entertaining segments and matches.

“WWE has to stop doing these gimmick PPVs. They’ve killed those match-types.” (@BaddestVirus)

While I agree with both Virus and Kuz that certain gimmick matches have lost some of their shine by being overused at these events, I don’t hate gimmick pay-per-views as a whole.

Technically, the Royal Rumble and Survivor Series are gimmick PPVs, too. They just happen to involve more traditional types of bouts, so fans don’t always look at them the same way they would Hell in a Cell or TLC.

The main thing WWE can do to make these events more enjoyable would be to limit itself to only one of the specialty matches at these events. Any more than that will devalue the gimmick.

We don’t need two or three Hell in a Cell matches in one night. While that would be cool if it happened on rare occasions, it’s made the bout feel less special over the years. It used to be something WWE only used to end major feuds. Now, Hell in a Cell is just another match.

“It’s wild how poorly WWE used Braun Strowman when he was at peak popularity.” (@williebangerout)

“Will Strowman fit in AEW?” (@abdulrahim1)

There were times when WWE did great things with Strowman, especially during that run he had toward being a main event talent, but WWE eventually screwed it up like it has with so many other stars from the past.

The Monster Among Men had so many tools necessary to succeed in WWE. He had size, power, speed, an intimidating presence and the ability to cut a halfway decent promo.

Unfortunately, finding ways to use him when he wasn’t chasing a title became the biggest problem. Once he lost several title bouts, the writing was on the wall.

I could see Strowman pop back up in WWE eventually after trying his hand at acting. A man of his size and look could be a valuable commodity in Hollywood with the right casting agent.

As far as AEW is concerned, I think it would be a mistake for Tony Khan to sign him when he still has other powerhouses who have been waiting for a chance to carry a title. Lance Archer, Luchasaurus, Brian Cage and Nick Comoroto are all waiting for the same opportunity Miro has just been given.

I agree with Trevor. Andrade does not need Vickie to be successful in AEW. In fact, she has not made an impact with any talent in AEW. Nyla Rose certainly hasn’t benefitted from her presence.

El Idolo is a special talent who can wrestle circles around most people in the world, but WWE never used him properly or gave him a chance to deliver his own promos.

When he spoke on Dynamite, he was easy to understand, so the argument some people have for him needing a manager because he doesn’t speak fluent English is moot. He speaks just fine.

It would be more interesting to see him paired up with Team Taz if he was going to be with anyone, but I am unlikely to have a lot of people agree with that thought.

“Ruby Riott is the only person AEW needs to contact out of the releases.” (@Smarkavelli)

Out of the six people who were released by WWE recently, Riott is the only one I can see heading to AEW as soon as her 90-day non-compete clause has expired.

Not only is she a great technical wrestler with the ability to hit high-flying moves, but she is one of the most unique personalities out there.

Riott’s short stature would make her an underdog against the likes of Jade Cargill, Rose, Kris Statlander and even Serena Deeb. She would be the ultimate babyface underdog for the AEW women’s division.

However, it wouldn’t be surprising if she fields offers from Impact, Stardom and other promotions around the world. Everyone in the industry knows how special she is, even if WWE execs never saw what we see.

“People overreact about releases. Yes, they’re bad news and no one ever wants to see someone lose their job, but WWE’s roster is filled with more talent than ever before.” (@spowell1)

Yes, WWE has a bevy of talented Superstars at its disposal, but there is a good reason why so many people are upset about these releases.

WWE is a business, so things like budget cuts come with the territory. What sucks is when WWE brags about making record revenue during a pandemic while also firing people in just about every department.

A surprising consequence of the pandemic has been corporations realizing they could streamline their workforce without sacrificing productivity. If it is cheaper to have people work from home, why pay for a big building to house everyone? If 100 people can do the job, why pay 150 to do it?

At the same time that WWE has been firing people, AEW has continued to hire and expand its roster. It makes for bad optics for WWE, but the stockholders won’t care as long as the share price looks good.

If you are seeing fans act in surprising ways to these releases, chalk it up to compassion for these people losing their main source of income just as the country was starting to return to some semblance of normalcy.

It costs nothing to support someone vocally, especially if that support helps someone get signed somewhere else. Do you think AEW would have gone after Andrade if there was no reaction to his release? Probably not.

“AEW will soon have the same problem WWE has with overcrowding.” (@thisisyoungdf)

It’s already gotten to that point in some people’s opinion. Plenty of signed names haven’t been on Dynamite in months, but they tend to show up on Dark and Elevation. Hopefully, Rampage helps alleviate some of that, too.

While I understand why so many fans want to see life partners work in the same company, Charlotte is someone WWE will bend over backward to keep. She will always be treated well and featured prominently. Going to AEW would do much less for her than most people.

“We give WWE so much grief for writing and storylines but if you go back 20-30 years, a lot of the storylines were cringeworthy.” (@dmoore521)

This is something I have thought about a lot. Pro wrestling has never been a good vehicle for telling great stories. It’s a physical medium, so the drama comes second to the match. What makes it difficult is when WWE has an awesome story that is followed by something terrible. That’s when it’s easy to become disenfranchised with the industry.

“Which wrestler is the hottest free agent on the market and which company will sign them?” (@driz)

Technically, Daniel Bryan and Brock Lesnar are both free agents. It’s hard to think of anyone who has more name value than them right now. As far as where they end up, Lesnar will show up in WWE again, while Bryan probably works out a deal to work a few matches in Japan when he re-signs with WWE.

“Should Liv Morgan get a push on SmackDown? She can talk, work and deserves a big opportunity.” (@fcourtney27)

Yes, Morgan should get a big push. Not only is she better than some people may realize, but the blue brand needs more variety in the title picture. It only has a handful of women who are active right now, so it needs to make use of everyone to keep things from becoming stale.