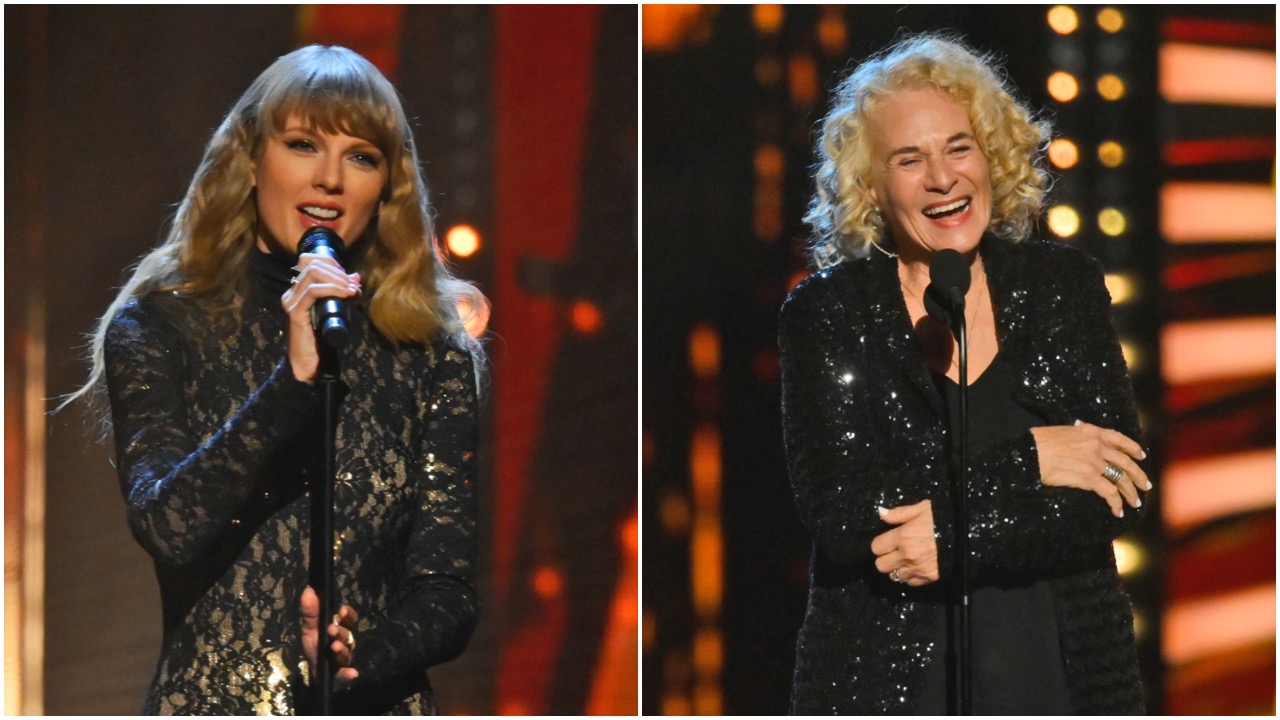 Carole King surely had more than her ears burning and her eyes welling as she was inducted into the Rock and Roll Hall of Fame Saturday night. She might have felt the earth move under her feet as she accepted the powerful praise of Taylor Swift, whose 700-word speech lauded her forebear as “the greatest songwriter of all time.”

One sentence in particular has already gone down in Swiftie lore, or at least caused a lot of Swift fans to Google the sleeve of the 50-year-old “Tapestry” album: “It was a watershed moment for humans in the world who have feelings, and for cats who had big dreams of one day ending up on iconic album covers.”

King was already a member of the Hall of Fame, as a songwriter inducted alongside former husband and collaborator Gerry Goffin, but her being voted in as a solo recording artist and performer was still considered long overdue, and Swift’s elegant remarks, from one era’s preeminent pop songwriter to another’s, helped make it worth the wait.

“I can’t remember a time when I didn’t know Carole King’s music. I was raised by two of her biggest fans, who taught me the basic truths of life as they saw it: that you should treat people the way you want to be treated, that you must believe that you can achieve whatever you want to in life, and that Carole King is the greatest songwriter of all time.

“And there have been times when any fan’s dedication to the artist they love can complicate things in their personal life. For example, my dad once told me a story from when he was in college and a girl he was just starting to date flirtatiously asked him if there were any songs that made him think of her. He instantly responded with his absolute favorite song, which was ‘It’s Too Late’ by Carole King, not taking into consideration that the lyrics include lines like ‘Something inside has died / And I just can’t hide and I just can’t fake it.’ Shockingly, the relationship didn’t work out. But if it had, I wouldn’t be here tonight.

“I grew up dancing around the living room in socked feet to the sounds of Carole’s soulful voice, her infectious melodies and lyrics that I, a 7-year-old, thought had been crafted for my exact, specific life experience. I listen to Carole’s music now and I feel that same tingle of recognition. Her songs speak to the true and honest feelings that everyone has felt, is currently feeling or hopes to feel one day. So it is only right for them to be passed down like precious heirlooms from parents to children, older siblings to younger, lovers to each other. These songs come to you from somewhere else — a loved one, a friend or the radio — and then, suddenly, they are partly ours.

“The purity to the music she creates exists between two worlds — the mysterious magical inspiration and decades of hard-earned and hard-learned craftsmanship. Just because Carole King makes what she has accomplished look so effortless doesn’t mean it has been.

“She started out writing songs as a staff songwriter in the legendary Brill Building when she was a teenager and a young mother. She wrote hits for other artists, and if I try to list them all I will be here all night. But the lyrics and melodies Carole have written have been sung by legends like Aretha Franklin, the Drifters, the Monkees, Mariah Carey, James Taylor and the Beatles — two of whom we are lucky enough to have in this very room tonight.

“Later in her songwriting career, Carole had to be coaxed to step out front and perform her songs herself. And what a moment in music history that was. With ‘Tapestry,’ she became one of the most successful female artists of all time. Her persona on ‘Tapestry’ feels like listening to a close friend intimately sharing the truths of her life so that you can discover the truths of your own. It feels like sage wisdom, gentle comfort and reassurance that you aren’t alone in this life.

“It was a watershed moment for humans in the world who have feelings, and for cats who had big dreams of one day ending up on iconic album covers.

“Carole taught artists like me that telling your own story is worth the work and struggle it takes to earn the opportunity for your story to be heard. That musical connection can be generation-spanning. She created the purest works of love and strength and catharsis while navigating the politics of an era that didn’t make space for the idea of a female genius.

“Slowly but surely, Carole King worked and worked until she had created one, and it will hers forever. She is an immensely generous artist in every sense of that term. She has given us all so much. And that’s why I’m so moved and honored to be here this evening to give something back to her. Carole, please accept your well-deserved place in the Rock and Roll Hall of Fame.”

King praised Swift as well on Saturday night — as she has before, like when she gave the younger singer the Artist of the Decade Award at the AMAs a few years ago.

But King was also paying it backward as well as forward, of course, in her own comments. She said that “I keep hearing it, so I guess I’m going to have to try to own it, that today’s female singers and songwriters stand on my shoulders. Let it not be forgotten,” she added, “that they also stand on the shoulders of the first woman to be inducted into the Rock and Roll Hall of Fame. May she rest in power: Miss Aretha Franklin!”