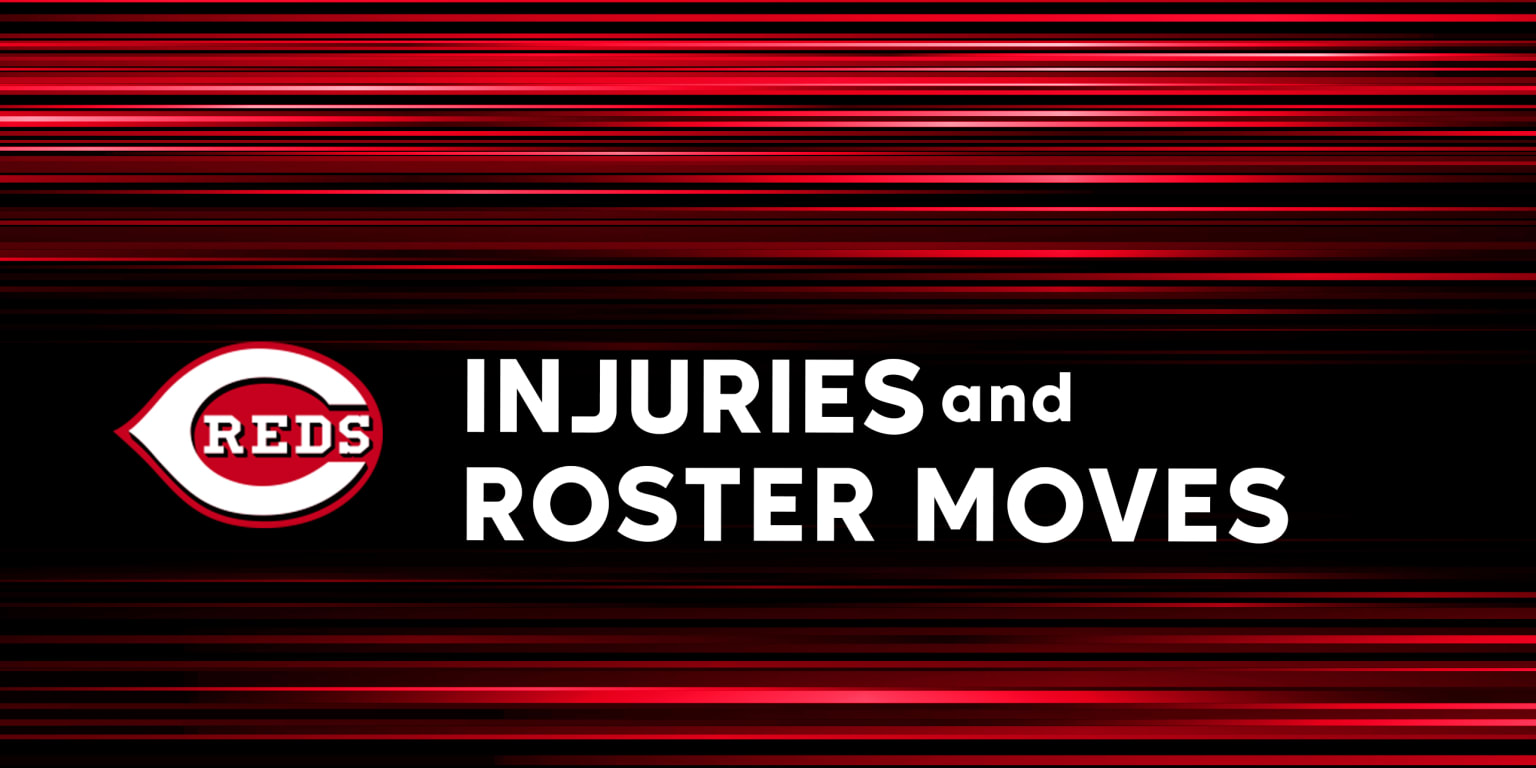 Keep track of the Reds’ recent transactions and injury updates throughout the season.

Sept. 23: LHP Mike Minor placed on 15-day IL
Minor was scratched from his start against the Brewers after he was placed on the 15-day injured list, retroactive to Sept. 20, with left shoulder soreness. Right-hander Luis Cessa will start instead.

Sept. 23: RHP Connor Overton reinstated from 60-day IL
Overton was reinstated from the IL after making two rehab starts with Triple-A Louisville, fanning nine and walking three over 7 2/3 innings. The righty was on the IL because of a stress reaction in his lower back.

Overton, who last started on May 17 for the Reds, will be in a relief role for the rest of the season.

Sept. 21: OF Nick Senzel placed on the 60-day injured list with a fractured left toe; OF Michael Siani’s contract selected from Triple-A Louisville
Senzel will miss the final two weeks after he was hurt crashing into the wall trying to make a catch in Tuesday’s 5-3 loss to the Red Sox.

Siani, who is ranked by MLB Pipeline as Cincinnati’s No. 26 prospect, is a left-handed-hitting center fielder and immediately becomes the Reds’ best speed threat. The 23-year-old spent most of the season at Double-A Chattanooga and batted .252 with a .755 OPS, 12 home runs and 49 RBIs in 121 games. He played eight games since his promotion to Louisville earlier this month. In his 129 games overall, Siani has 52 steals and he’s known for making strong defensive plays in the outfield.

“He’s had a nice year. He’s put himself in a position to have a really good approach at the plate, consistent at-bats,” Reds manager David Bell said. “We’ve seen him a lot. He’s talented, he’s a good athlete, he’s a good defender. The big thing, I think, from my understanding, is that going back to the Arizona Fall League last year, he’s made some nice adjustments and he’s still a young player and all that. He’s put himself in a position where the timing was right to let him experience some of the Major Leagues here the last couple of weeks is good for us and for his development.” More>>

Sept. 20: RHP Graham Ashcraft ready to return
Rookie starting pitcher Ashcraft made his second rehab assignment start on Monday, this time for Triple-A Louisville. It wasn’t a good line as Ashcraft allowed eight runs (six earned) and 11 hits over 2 2/3 innings. He did not walk a batter and struck out five while throwing 70 pitches.

“He felt good. He felt strong. He’ll be ready to make his next start here, mostly likely it will be Saturday,” Reds manager David Bell said.

It lines up that Ashcraft should be able to get three more starts for the club before the season ends.

RHP Graham Ashcraft (right biceps soreness)
Expected return: Possibly Sept. 24
Ashcraft made his second rehab assignment start on Sept. 19, this time for Triple-A Louisville. It wasn’t a good line as Ashcraft allowed eight runs (six earned) and 11 hits over 2 2/3 innings. He did not walk a batter and struck out five while throwing 70 pitches.

In his first rehab start, Ashcraft threw 53 pitches over three innings for Double-A Chattanooga on Sept. 14, striking out six.

It lines up that Ashcraft should be able to get three more starts for the club before the season ends. (Last updated: Sept. 20)

RHP Justin Dunn (right shoulder rightness)
Expected return: TBD
Dunn was placed on the 15-day IL on Sept. 15 (retroactive to Sept. 12). Dunn dealt with a similar injury when he left an Aug. 30 game. Manager David Bell described the soreness as “more significant” than that which had bothered him previously. (Last updated: Sept. 15)

RHP Robert Dugger (right shoulder pain)
Expected return: TBD
Dugger began a rehab assignment with Triple-A Louisville on Sept. 11, and pitched one scoreless inning of relief with two walks. His day ended a little early after he was hit on the hand by a ball. He last pitched for the Reds on Aug. 5 against the Brewers, tossing four innings while allowing five runs and walking four batters. (Last updated: Sept. 12)

OF Nick Senzel (broken left toe)
Expected return: 2023
Senzel was injured attempting to make a catch as he crashed into the center-field wall on Sept. 20 vs. the Red Sox. His foot slammed into the unpadded portion of the fencing and caused the fracture. He was transferred to the 60-day IL on Sept. 23. (Last updated: Sept. 23)

C Aramis Garcia (left middle finger fracture)
Expected return: TBD
Garcia was sent to Louisville on a rehab assignment. The catcher has been working his grip strength and there is no timetable yet for a possible return to the club. (Last updated: Sept. 23)

RHP Daniel Duarte (right elbow swelling)
Expected return: Possibly September
Duarte is scheduled to begin a rehab assignment on Sept. 8 at Triple-A Louisville. There is still hope that the right-hander could return in time to finish the season with the big league club. Duarte has been out since April 17, after he pitched one inning the previous day vs. the Dodgers. (Last updated: Sept. 6)

RHP Jeff Hoffman (right forearm tightness)
Expected return: 2023
Hoffman still hasn’t fully recovered and has felt some soreness in his elbow, prompting the Reds to shut him down for the remainder of the season. An MRI taken on Friday showed no serious damage and a major elbow surgery was ruled out. But he is going for a second opinion to confirm the diagnosis. (Last updated: Sept. 2)

INF Mike Moustakas (Grade 2 left calf strain)
Expected return: 2023
Moustakas began his sixth IL stint of 2022 on Aug. 27 (retroactive to Aug. 24) just nine days after returning from a Grade 1 strain on the same calf. Reds manager David Bell assured that Moustakas will not return at the end of his 10 days and will likely spend the rest of the season on the IL in order to be healthy in time for 2023.

“He loves to play,” Bell said. “He has been durable throughout his career. It’s been a tough stretch for him. You take pride as a player being on the field. He definitely has that to the point of he does and says whatever he has to to be on the field. His body hasn’t allowed him to do that. Now the focus is, whether it’s this season or next, getting everything as healthy as he possibly can and not have to worry about that.”

RHP Tony Santillan (lower back pain)
Expected return: Likely 2023
Manager David Bell said Santillan, who has passed the 60-day threshold since he was placed on the IL on June 17, is “still recovering” but may not be able to return in 2022.

“I don’t think we realized how significant his injury was,” Bell said. “It’s going to be a bit of a longshot to have him back this season, but he’s getting better.”

After his June 13 appearance at Arizona, Santillan experienced lower back pain that got gradually worse in the following days and forced him on the injured list. Santillan has a 5.49 ERA in his 21 appearances out of the bullpen this season. (Last updated: Aug. 19)

The surgery wasn’t viewed entirely as season ending but he’s not expected to be back in 2022.

“I think [Stephenson returning this season] was a longshot anyway,” Reds manager David Bell said. “I think anything is possible, but it’s not something we’re going to jeopardize him or put him in a situation where we rush him back to get a few games in. I think it’s a good goal to have and anything is possible, but I think even before the surgery, it was a longshot.”

The earliest Stephenson could be activated from the 60-day injured list is Sept. 21. He left the Reds’ July 22 game vs. the Cardinals in the top of the first inning after he broke his right clavicle on a foul ball off the bat of Paul Goldschmidt. (Last updated: Aug. 5)

RHP Vladimir Gutierrez (Tommy John surgery)
Expected return: Mid-2023
Gutierrez underwent successful Tommy John surgery on his right elbow on July 20 and likely won’t pitch for the Reds until midway through the 2023 season. Initially on the IL with right forearm tightness, he was transferred to the 60-day IL on July 7 after a setback two days earlier while he was pitching live batting practice and was later diagnosed with a torn ulnar collateral ligament. (Last updated: July 22)

RHP Lucas Sims (back surgery)
Expected return: 2023
Sims had season-ending microdiscectomy surgery to alleviate the discomfort of a bulging disc.

Expected to be the Reds’ best late-inning reliever entering the season, Sims had a 9.45 ERA in six appearances. He was delayed at camp by offseason back issues and was forced to begin the season on the IL. Those issues returned after back-to-back scoreless appearances, and he went back on the IL on May 12.

“I should be [pitching] off the mound, hopefully, before the end of the season. [But] there’s not enough time to build up after that,” Sims said. “I definitely didn’t think it was going to come to this so that was a little bit disappointing. Ultimately, I’m ready to get this thing done, get healthy. Luckily, I should be able to have a good, normal offseason of training. That was what it came down to.” (Last updated: July 8)

RHP Tejay Antone (Tommy John surgery)
Expected return: 2023
Antone, who has spent the season rehabilitating at the team’s complex in Goodyear, Ariz., was with the club during its three-game series vs. the D-backs in Phoenix.

“It’s been going good. I am really feeling good,” Antone said. “Mechanically, I feel as good as I was last season. I still have a lot of fatigue and stuff like that I have to build up through. In terms of how I feel and how my body is moving, I feel phenomenal.”

Antone expected to be throwing from a mound in bullpen sessions by the end of August.

“I should be facing some hitters by the end of September,” he said. “It sounds like they’re going to let me face some hitters, and then shut me down and let me get ready for the season.”

Antone had Tommy John surgery performed on his right elbow on Aug. 27, 2021, by team medical director Dr. Tim Kremchek in Cincinnati. It was Antone’s second such surgery on the elbow after he also had one as a Minor Leaguer in 2017. (Last updated: June 15)