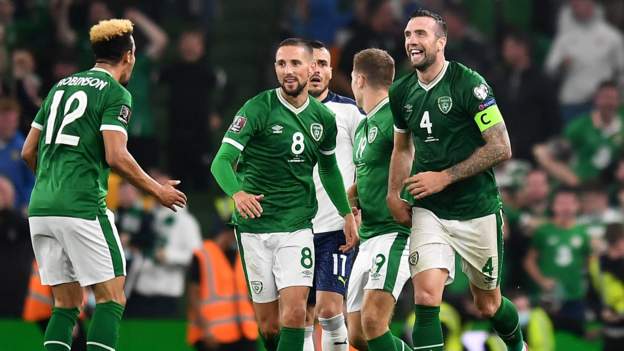 A late own goal gave the Republic of Ireland their best result under Stephen Kenny as they drew with Serbia in a World Cup qualifier in Dublin.

The Republic were then indebted to teenager Gavin Bazunu, who made 10 saves to keep the visitors at bay.

They snatched a point when Milinkovic-Savic’s 86th-minute clearance went in off Nikola Milenkovic.

The hosts then pressed for a late winner – in front of a raucous crowd – but Serbia almost got it when Nemanja Gudelj’s long-range free-kick hit the bar.

The Republic’s run of competitive games without a victory under Kenny extended to 12 – but this felt like a success with the late drama and spirited comeback.

Serbia now trail Portugal by two points at the top of Group A in the battle for a World Cup spot, while Kenny’s side are second bottom with just two points.

It is more than two years and 16 matches since the Republic won a competitive game, following a June 2019 victory over Gibraltar.

Youngsters impress in another late show

Football in the Republic of Ireland is torn at the moment.

There are those who think Kenny needs time as he tries to blood youngsters and get the team playing a passing game.

Bazunu, the Manchester City keeper on loan at Portsmouth, and Norwich centre-back Andrew Omobamidele – who were both excellent – are 19, and Adam Idah, who worked hard but was isolated up front, is 20.

But the other argument is they have only beaten Andorra – in a friendly – in 16 games over 18 months.

For all the under-pressure Kenny may try to change the Republic’s style, one thing will never change – their love of late goals from crosses.

Each of their last five home goals in competitive matches have come in the 85th minute or later – including Shane Duffy’s leveller last time out against Azerbaijan.

They were fortunate Milinkovic-Savic kicked the ball against his own team-mate for the equaliser, but the goal had been coming as the Republic – backed by their vociferous fans – put Serbia under a lot of late pressure.

That was a big positive as was their outstanding defence and goalkeeper.

Yet they only had two shots on target all game, a Jeff Hendrick free-kick and a long-range drive from Omobamidele, and could have been thrashed if not for Bazunu’s heroics.

Will this result change minds in the pro and anti-Kenny camps? Probably not.