Republicans Are Ready to Declare the United States a Christian Nation 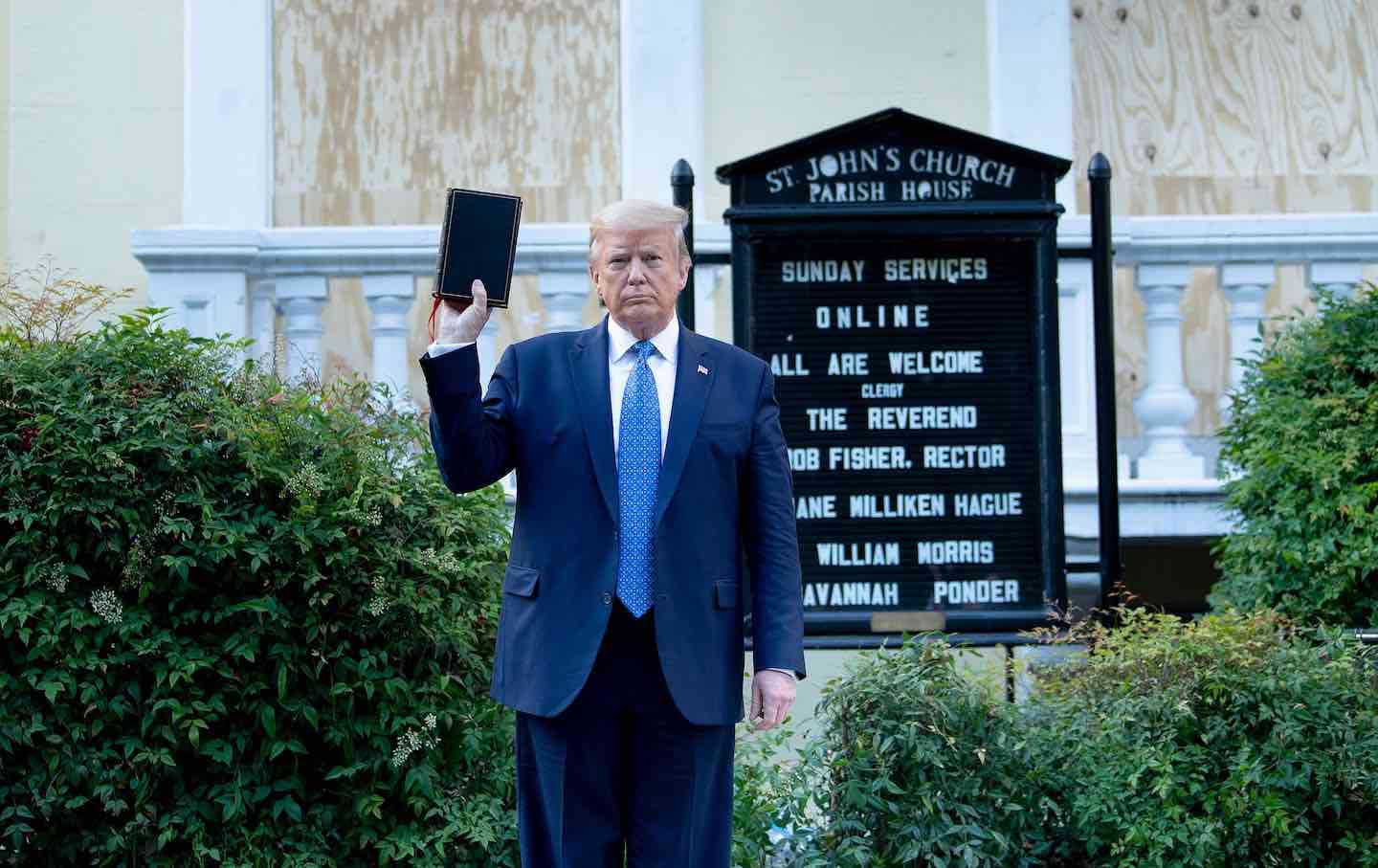 ewport, —Outside the Truro Synagogue in this historic New England community stand markers that honor the legacy of one of the oldest Jewish congregations in the United States. It was to the Jews of Newport that George Washington, in his capacity as the nation’s first president, confirmed the commitment of the new republic to respect all religions and to maintain the separation of church and state that was outlined in the First Amendment to its new Constitution.

“The Citizens of the United States of America have a right to applaud themselves for having given to mankind examples of an enlarged and liberal policy—a policy worthy of imitation. All possess alike liberty of conscience and immunities of citizenship,” wrote Washington in his 1790 letter to the Newport congregation. Washington relied on Old Testament language in his message, assuring that “the children of the stock of Abraham” would, like all believers in all faiths, “sit in safety under his own vine and fig tree and there shall be none to make him afraid.”

Determined to avoid the conflicts that plagued Europe, where monarchs established and maintained favored state churches, Washington made it clear that the United States would not be a land where one religion would be favored while the followers of other faiths would be dismissed as “dissenters.” “It is now no more that toleration is spoken of as if it were the indulgence of one class of people that another enjoyed the exercise of their inherent natural rights, for, happily, the Government of the United States, which gives to bigotry no sanction, to persecution no assistance, requires only that they who live under its protection should demean themselves as good citizens in giving it on all occasions their effectual support,” wrote the president.

That is the American creed. It is this principle that has led presidents to go out of their way to celebrate all religions, as Dwight Eisenhower did when he dedicated the Islamic Center of Washington, D.C., in 1957 and declared that “under the American Constitution, under American tradition, and in American hearts, this Center, this place of worship, is just as welcome as could be a similar edifice of any other religion.” And it is this principle that led President Ronald Reagan to use a 1984 speech at Temple Hillel in Valley Stream, New York, to affirm that

[w]e in the United States, above all, must remember that lesson, for we were founded as a nation of openness to people of all beliefs. And so we must remain. Our very unity has been strengthened by our pluralism. We establish no religion in this country, we command no worship, we mandate no belief, nor will we ever. Church and state are, and must remain, separate. All are free to believe or not believe, all are free to practice a faith or not, and those who believe are free, and should be free, to speak of and act on their belief.

Eisenhower and Reagan were Republicans, but on this issue there was a unity of understanding with Democrats such as John Kennedy and Jimmy Carter.

Separation of church and state was sacrosanct. Both parties could agree on that.

New polling suggests that the majority position of American Republicans is that the United States should declare itself to be a Christian nation.

A national survey of 2,091 Americans, conducted in May by the University of Maryland Critical Issues Poll group, asked, “Would you favor or oppose the United States officially declaring the United States to be a Christian Nation?” Sixty-one percent of the Republican respondents expressed support for the declaration, while just 39 percent said they were opposed. In other words, the party’s base voters are not divided on the question of whether to toss aside the Constitution and declare the United States a Christian nation. They overwhelmingly support the concept.

“Most Republicans in every age group favor designating the U.S. a Christian nation, but even more so in older generations,” noted the academics who conducted the survey, professors Stella Rouse and Shibley Telhami, in a review of their research for Politico.

What this means is that, in a party where leaders have bent again and again toward the most extremist positions of their electoral base, there is a growing movement that is prepared to tear down the wall of separation between church and state and declare the United States to be a nation in which one religion—their own—reigns supreme.

While prominent conservatives such as Reagan and Barry Goldwater once defended religious pluralism and distanced themselves from the far-right fringe, former president Donald Trump has frequently amplified antidemocratic and white supremacist memes that have long been associated with Christian nationalism—going so far as to pose with a Bible in Washington’s Lafayette Square after Black Lives Matter activists were violently removed in June 2020. And US Representative Marjorie Taylor Greene, a close Trump ally, has openly declared, “I’m a proud Christian Nationalist.”

Christian nationalism has been mainstreamed to such an extent that it is now the accepted faith of the party faithful. And Greene is not the only elected Republican promoting the ideas associated with a movement that Representative Adam Kinzinger (R-Ill.) decries as “the American Taliban.”

Shortly after being nominated for a second term in a June primary, Colorado Republican Representative Lauren Boebert appeared at a church in the state for a televised service, during which she announced, “I’m tired of this separation of church and state junk that’s not in the Constitution.”

The representative dismissed President Thomas Jefferson’s explicit “wall of separation” letter to Connecticut’s Danbury Baptists as “a stinking letter” that “means nothing like what they say it does.”

“The church,” said Boebert, “is supposed to direct the government.”

Boebert’s wrong, as is Pennsylvania Republican gubernatorial nominee Doug Mastriano when he dismisses the separation of church and state as “a myth.” And so is Florida Governor Ron DeSantis, who is promoting a Civics Literacy Excellence Initiative that wants high school students to be taught that the founders of the American experiment didn’t really believe in maintaining the “wall of separation” that Jefferson described.

Unfortunately, the truth is not going to dissuade overt Christian nationalists and their growing cadre of allies from promoting a radical rewrite of history. Nor will their oaths to defend the Constitution lead supposedly more “mainstream” Republican Party leaders to tell their misguided electoral base that they are mistaken. That didn’t happen after Donald Trump mounted a coup attempt to overturn the results of the 2020 election; Republicans in Congress deferred to Trump and Trumpism. It is foolish to imagine that those same congressional Republicans will suddenly develop spines for debates about maintaining the separation of church and state.

The good news is that the vast majority of Americans respect religious pluralism every bit as much as the founders did. By a solid 62-38 margin, respondents to the Critical Issues Poll said they opposed officially declaring the United States to be a Christian nation. That means that if the overall electorate recognizes what’s at stake in the Republican turn toward Christian nationalism, they will reject it. But for that to happen, Democrats need to start making an issue of the fact that the Party of Lincoln, Eisenhower, and Reagan is rapidly becoming the party of Lauren Boebert, Doug Mastriano, and the deconstruction of the wall of separation between church and state.