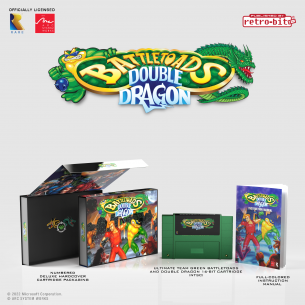 POMONA, Calif. – Nov. 22, 2022 – PRLog — Retro-Bit® Publishing (https://retro-bit.com/retro-bit-publishing/), a publishing imprint of Retro-Bit® is proud to announce that they will be teaming up with the most iconic heroes in beat ’em up history to release a limited-edition 16-Bit Collector’s Cartridge of Battletoads & Double Dragon. Pre-orders will be available starting November 22nd at a price of $54.99 in North America and €69.99 in Europe and will run through December 27, 2022.

Developed by Rare and first released in 1993, this critically-acclaimed beat ’em up brought together Jimmy and Billy Lee from Double Dragon and the three Battletoads — Rash, Pimple and Zitz – to form video gaming’s ultimate team-up and battle the evil Dark Queen and Shadow Boss. Hailed by fans and critics alike for having impressive graphics and a stellar soundtrack, this 16-bit game sees players fight through seven lengthy and varied stages beating up aliens, racing on speed bikes, swinging over bottomless pits and getting into epic shootouts in the vast reaches of space. The whole thing is anchored by a fun and engaging story that brings back some of the best-known enemies from both the Battletoads and Double Dragon franchises, including familiar faces like Big Blag, Abobo, and Robo-Manus.

The upcoming Collector’s Cartridge from Retro-Bit® Publishing will celebrate the game’s 30th anniversary with a limited-edition deluxe hardcover box that is individually-numbered and comes with an Ultimate Team Green 16-Bit cartridge. This one-time Collector’s Cartridge will also include a full-color instruction manual.

“There are a lot of great epic beat ’em ups, but none are as legendary as Battletoads & Double Dragon,” explains Richard Igros, Director of Marketing. “After the overwhelming success of our 8-Bit Collector’s Cartridge earlier this year, we are thankful to Rare and Arc System Works for the opportunity to give 16-Bit fans a chance to experience one of the most unique brawlers ever made. This is the kind of game that isn’t afraid to shift from good, old-fashioned brawling to outer space shoot ’em up action in the blink of an eye, which is just one of the reasons why Battletoads & Double Dragon remains so beloved three decades later.”

More information can be found at: http://retro-bit.com/btdd-snes/