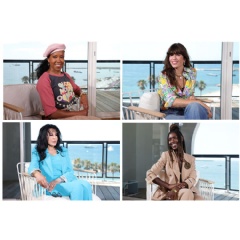 Yamina Benguigui, Lou Doillon, Jodie Turner-Smith, Tilda Swinton and Regina King shared their experiences and views of women’s representation in the film industry during a fascinating set of conversations. A new series of podcasts recorded in the Women In Motion studio with leading women in cinema will be available soon. The Women In Motion award was presented to the campaigning actress, producer and director Salma Hayek, while the Young Talent Award was given to Australian director Shannon Murphy

Nearly 200 people from the film and media world attended the new season, which began with a Talk with Yamina Benguigui, who spoke about sisterhood in particular. “What I also mean by this word is solidarity, whatever continent you live on. We know instinctively that women’s rights are never really achieved, ever. As soon as the extremes start to rise, in the West, in Africa, women are always the first to suffer. That’s why this is so important. It’s female solidarity.”

She also discussed the role that cinema played in her own emancipation. “Films taught me that I could be an individual in my own right, that my life wouldn’t be one of submission, that at any given time, I wouldn’t belong to my father, then to a husband, and then to the cemetery. It was an escape. Cinema is everything to me.” The director has also made film a driver of change. “A man in my situation would have made 10 films already. How can we make things change? That’s my battle. And I’m fighting it with movies, they’re better than words. It’s our duty to continue these battles through films.”

The following day, multidisciplinary artist Lou Doillon discussed the various female role models she used for her own creative instincts. “In literature, I started with Dorothy Parker, in art, it was Louise Bourgeois, Sophie Calle, and in music it was Nina Simone, PJ Harvey, Garbage… I have a pantheon of these women. More recently, in the last three or four years, I’ve mainly been reading books by women writers, but it hasn’t been a conscious decision. I just feel a need for them. There are questions being asked: the question of our choices, the complicated question of physiological motherhood and artistic motherhood. There are so many women who have talked about this really well.”

She also talked about the changes underway: “There’s something very exciting happening today with this young generation of women, they are able to move forward together, with all their differences. Between our great-grandmothers, our mothers, and our daughters, isn’t it amazing. My son has the kind of attitude that my father never had.”

Another topic was the amount of freedom that women allow themselves. “It makes me laugh when I hear people say ‘If you have equality, there will be a lot of women who aren’t perfect.’ But can’t we say the same thing about men…? I’ve tried to show just how much my strength comes from my imperfections. It’s great to ask yourself questions, but you have to allow yourself not to have the answers. You have to give yourself the right to be imperfect – which those on the other side have always allowed themselves – the right to change, and to get things completely wrong.”

British actress Jodie Turner-Smith focused on the many steps that still need to be taken to achieve true diversity in the world of film. “Studios, the business, the industry, everybody has to understand that being an ally is going to cost money. You have to put your money behind it. The words will not suffice. When you make casting choices, when you hire actors of color, you have to hire people who know how to do their make-up, who know how to do their hair, who know how to light them properly… It’s going to take time for people to see the world in a different way.”

She then broadened her point to include the need for gender equality and the representation of minorities in film directing. “I want to make my life about not only just working with incredible directors, but working with women, working with women of color, using the opportunities that I have to give opportunities to people that are being kept out or who are not being given the level of respect that they deserve, when they are extremely talented… and are then not supported by the studio. I have already directed something: a short film, last year, called Jackie. You can watch it on YouTube. I wrote it, I directed it, I costume-designed it, I directed it… it made me feel like ‘OK, here is another path I really want to explore.’”

She concluded by talking about freedom and the need for people to feel good about themselves. “I want my daughter to feel that she can speak her voice, and that she can be fully present in that space and not apologize for her existence. My hope … is that this is something that I live by example, that she grows up seeing and is modeled to her. If I could talk to a six-year-old version of myself, I would say to her: ‘Don’t be afraid to take up space.’ And I would say to her: ‘Your complexion is beautiful. You might not know it now, but you will.’”
Iconic actress Tilda Swinton discussed her work and women’s representation in the film industry. “There have always been women filmmakers and there always will be. In fact, from all the way back from the  beginning of cinema, there have always been women screenwriters, there have always been women directors, across the globe, and very empowered. When people are encouraging themselves to feel anxious about a lack of women in filmmaking, they are maybe only looking at the names on a roster of directors at a film festival. They are maybe forgetting that all these films… are suffused with the sensibility of women filmmakers. We just need to have confidence and keep amplifying, but with the authority of knowing that women do make films.”

She also raised the issue of equal pay in the industry. “When working in what used to be called independent film, but actually was underground film, I don’t remember being paid for the first nine years of my life… we were working as artists. I’ve read the stories of women who have become aware that they have ‘carried the can’ equally or maybe even more, with a heavier can, and yet their male counterparts have been paid more. And it’s laughable that in this day and age that should still be happening.”
The seventh edition of Women In Motion Talks ended with a conversation with American actress, director and producer Regina King, who looked back at her career and how she came to directing. “I think that I was probably preparing myself all the while, as an actor, because I would really be paying attention to things that do not pertain to the actor. I would find myself asking myself questions that had nothing to do with the character… it just kind of felt like there was a moment when I decided to start saying out loud that I wanted to be director. I think I was scared to say it before, but I kind of felt it. And that maybe happened sometime around 2000. John Wells was super-supportive. My advice would definitely start with “Don’t let your fear silence you.” And I would say, “Ask questions and listen to the answers.” My acting experience helps me in so many ways, because I feel like understand how vulnerable you feel as an actor.”

Another key topic was women’s representation in the film industry. “Sure, things have changed. But we still have a long way to go, especially when you look at, just recently, with Emmy nominations and the percentage of women being recognized dropped from last year. The conversations have to continue, we have to keep shining a light on the fact that things aren’t reflective of what the rest of the world looks like, especially in America where that is ‘our export’ to the world. So, we have to continue to want to see stories told from different perspectives. I still think that parity does not exist, even as an actor. And with a lot of women that are doing the same amount of work, we are also mothers, so we’re kind of doing more work when we get home. I try to, as often as possible, focus on what is right and one of those things is the strength I see young girls having now. I didn’t have the moxie that I see when I am talking to nine-year-olds, and I feel very proud to be part of a generation that I think kind of helped shift things. It’s really a joy to watch.”

The seventh edition of Women In Motion also saw Kering add to its collection of podcasts produced by journalist, Géraldine Sarratia. Recorded at the Women In Motion studio during the Festival, the new series gave key women in the film industry a chance to talk about their work, which in many cases is not widely known. The podcasts featured Caroline Bonmarchand, a César-winning producer (at Cannes for Petite nature), Caroline Champetier, a director of photography (at Cannes for Annette), Uèle Lamore, an orchestra leader and composer (at Cannes for Marcher sur l’eau by Aïssa Maïga), Katia Wyszkop, a chief set designer (at Cannes for Benedetta) and Léa Mysius, a director and screenwriter (at Cannes for Olympiades).

In the presence of the festival jury, François-Henri Pinault, Chairman and Chief Executive Officer of Kering, Pierre Lescure, President of the Festival de Cannes and Thierry Frémaux, Director of the Festival de Cannes, gave the 2021 Young Talent Award to Australian director Shannon Murphy, following her acclaimed first film, Milla. In keeping with the tradition of the award, she had been chosen by her predecessor, Maura Delpero, whose presence enabled Kering and the Festival organizers to officially present her with the Young Talent Award for 2020.

They then presented the 2021 Women In Motion Award, kept secret until the last moment, to the campaigning actress, producer and director, Salma Hayek.

About Women In Motion

Kering’s commitment to women is at the heart of the Group’s priorities, and through Women In Motion extends to the field of art and culture, where gender inequalities are still flagrant even though creation is one of the most powerful vectors for change.
In 2015, Kering launched Women In Motion at the Festival de Cannes with the aim of shining a light on women in cinema, both in front of and behind the camera. Since then, the program has been expanded to include the fields of photography, art, literature, and music. Through its awards, the program recognizes both inspirational figures and talented young women, while its Talks provide an opportunity for leading personalities to share their views on the representation of women in their profession.
For the past seven years, Women In Motion has been a platform of choice for helping to change mindsets and reflect on women’s place and recognition across artistic fields.

A global Luxury group, Kering manages the development of a series of renowned Houses in Fashion, Leather Goods, Jewelry and Watches: Gucci, Saint Laurent, Bottega Veneta, Balenciaga, Alexander McQueen, Brioni, Boucheron, Pomellato, Dodo, Qeelin, Ulysse Nardin, Girard-Perregaux, as well as Kering Eyewear. By placing creativity at the heart of its strategy, Kering enables its Houses to set new limits in terms of their creative expression while crafting tomorrow’s Luxury in a sustainable and responsible way. We capture these beliefs in our signature: “Empowering Imagination”.

Please visit the Women In Motion press section on kering.com